In 1477, a gentlewoman named Margery Brews was soon to be married to a member of the Norfolk aristocracy, John Paston. Margaret and John were rather smitten with each other, and in the year leading up to their marriage they exchanged a series of love letters. In one particular letter, sent in February, Margery described John as her ‘right well-beloved Valentine’ and signed off the letter as ‘your Valentine, Margery Brews’. This intimate letter between these two lovebirds is thought to be the earliest surviving Valentine’s love letter.

Despite their passion, there was trouble ahead for Margery and John. Their relatives initially opposed the marriage. Margery’s father felt that his daughter could make a more financially advantageous match and John’s elder brother was insulted that his permission had not been asked before seeking Margery’s hand in marriage. Thankfully, Margery’s mother, Elizabeth, was a skilled negotiator. Elizabeth wrote a letter to John, and took advantage of the Valentine’s season to sort out these problems. She wrote:

'On Friday it is Saint Valentine’s Day, and every bird chooses itself a mate. And if you would like to come on Thursday night ... I trust God that you will speak to my husband, and I will pray that we will bring the matter to a conclusion.'

John’s family were also unwilling to support the match on the grounds that Margery’s dowry was too low. In the letter where Margery calls John her ‘right well-beloved Valentine’, she states:

'I want you to understand clearly that my father refuses to part with any more money than a £100 and 50 marks in this business, which is very far from fulfilling your wishes.'

Margery informed John that if he was not satisfied with the £100 or felt that he could get more money, he was 'not to take the trouble to visit any more on this business'.

Annotation on the back of the letter notes that Margery calls herself John’s “Valentine”: Add MS 43490, f. 24v

As Virgil said, “Love conquers all”. Margery and John were married a few months later. These letters are part of a large archive known as the Paston Letters, comprising 1,000 letters and documents including petitions, leases and wills. These documents provide a fascinating insight into the private lives of the Paston family of Norfolk over a period of 70 years. 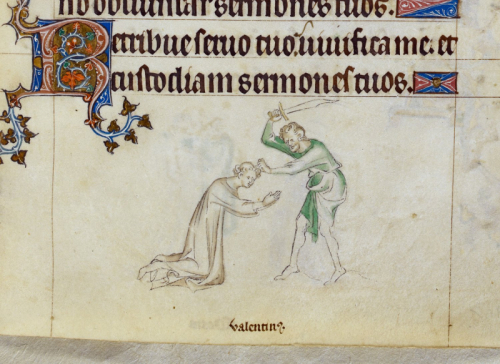 The martyrdom of St Valentine in the Queen Mary Psalter: Royal MS 2 B VII, f. 243r

Margery and John’s love letters also provide valuable insight into the connection between romance and the feast of St Valentine on 14 February. The two have not always been associated. We know that St Valentine was a Christian martyr who lived and died in Rome during the 3rd century. Over 1,000 years later, Geoffrey Chaucer (d. 1400) wrote a poem called Parliament of Fowls, in which he described a group of birds who gather together in the early spring — on ‘seynt valentynes day’ — to choose their mates for the year. 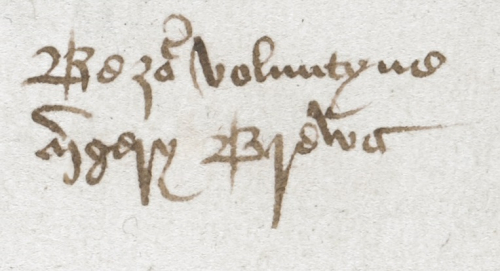 During their courtship, Margery wrote another letter to John in which she referred to him as her ‘dearly beloved valentine’. Margery ended this letter by saying, 'I beg you that you will not let anyone on Earth see this letter, except yourself'. If only Margery knew that over 500 years later, her love letters would be discussed in the news and be fully available to view online!

Quotations from the letters in this blogpost have been taken from D. Watt (ed.), The Paston Women: Selected Letters (Woodbridge, 2004).