A useful companion for a scholar: cats in the Middle Ages

'I am a most faithful watchwoman, ever-vigilant in guarding the halls; in the dark nights I make my rounds of the shadowy corners — my eyes’ light is not lost even in black caverns. For unseen thieves, who ravage the heaped-up grain, I silently lay snares as fatal obstacles. Though I am a roving huntress and will pry open the dens of beasts, I refuse to pursue the fleeing herds with dogs, who, yapping at me, instigate cruel battles. I take my name from a race that is hateful to me.' 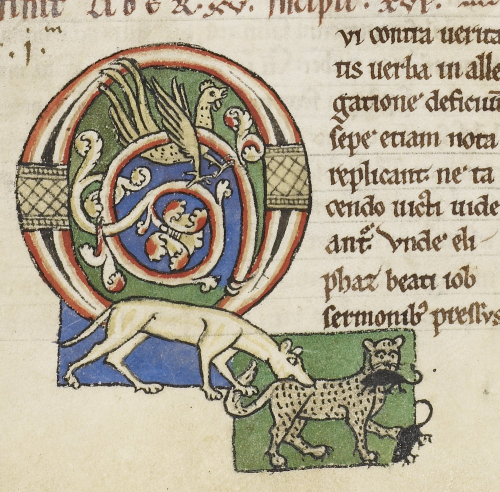 A decorated initial featuring a cock, a dog biting a cat, and a cat carrying mice, at the beginning of book 16 of Gregory the Great's Moralia in Job (Arnstein, Germany, 12th century): Harley MS 3053, f. 56v

The answer is, of course, a cat. This riddle was posed by Aldhelm, abbot of Malmesbury, in 7th-century England. It is a striking portrait of an animal that was, it seems, especially important to those in religious life during the Middle Ages. In the Ancrene Riwle, a guide for anchoresses written in the early 13th century these religious women, who were shutting themselves away from the world, were only allowed to have one animal companion … and that was a cat. Medieval monks and nuns, leading sometimes solitary but often studious lives, immortalised their beloved feline companions in texts that have captivated their readers ever since.

Perhaps the most famous tribute to a scholar’s cat is the 9th-century poem known as Pangur Bán, named after the cat that inspired it (the cat’s name indicates his soft, white coat). Written in Old Irish, by an Irish monk in exile in Continental Europe, it playfully and fondly compares the monk’s arduous tasks to those of his cat.

I and Pangur Bán my cat,
‘Tis a like task we are at:
Hunting mice is his delight,
Hunting words I sit all night.

Better far than praise of men
‘Tis to sit with book and pen;
Pangur bears me no ill-will,
He too plies his simple skill.

‘Tis a merry task to see
At our tasks how glad are we,
When at home we sit and find
Entertainment to our mind.

Oftentimes a mouse will stray
In the hero Pangur’s way;
Oftentimes my keen thought set
Takes a meaning in its net.

When a mouse darts from its den,
O how glad is Pangur then!
O what gladness do I prove
When I solve the doubts I love!

So in peace our task we ply,
Pangur Bán, my cat, and I;
In our arts we find our bliss,
I have mine and he has his.

Practice every day has made
Pangur perfect in his trade;
I get wisdom day and night
Turning darkness into light. 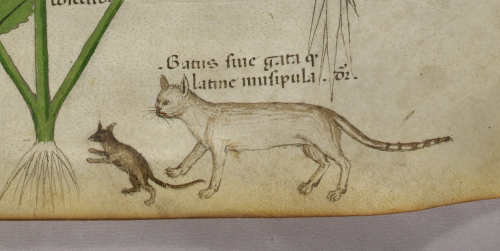 The nameless monk who was so fond of his cat came from a society (early medieval Ireland) in which there was an entire section of the law-code devoted to cats, so his love of his snow-white companion is perhaps not so surprising. The central tract on cats in medieval Irish law was called Catslechta — ‘Cat-sections’ — and detailed not only the types of cat (herders, mousers, guard cats, but also kittens as playmates for children and simple pet cats) but also what was due to an owner for the loss of such cats, as well as certain exemptions available to cats in the pursuit of their duties. For example, a cat was not held to be liable if it injured someone who had no business being there while it was chasing a mouse. There is a respect for and a tolerance of cats in domestic settings within the medieval Irish law codes, which indicate a high importance and affection attached to these domestic creatures. Little wonder then that one of the most famous of medieval poems about a cat evolved from such a society.

Cats were appreciated as both companions and skilled mousers during the Middle Ages. There is no doubt that many cats were a valuable and beloved part of people’s domestic life whether in the cloister or the wider world. Cats were not only useful animals to have around but also loving companions whose loyalty alleviated loneliness and whose antics amused their owners no end — some of which have become immortalised in literature — from the Middle Ages and beyond.

These authors’ fascination with and love for their cats continues to shine through the centuries as can be seen in the Cats on the Page exhibition currently running at the British Library.

For more feline capers, you may be interested in our blogposts Lolcats of the Middle Ages, Cats, get off the page! and Cat and mouse, and hairy elephants.

The British Library’s Cats on the Page exhibition explores cats and their capers in rhymes and stories familiar to us from childhood. Whether raising a smile, solving a crime, wreaking magical havoc or even performing in theatre, cats take centre stage in this free exhibition. Cats come to life in books manuscripts and artwork to captivate and inspire audiences.

Cats on the Page is supported by Animal Friends Pet Insurance Experts and is open until 17 March 2019. Visit now to avoid missing this fantastic exhibition.

Posted by Ancient, Medieval, and Early Modern Manuscripts at 9:07 AM