Digitisation can lead to new discoveries, and allow us to make previously unnoticed connections. Recently, a manuscript digitised as part of The Polonsky Foundation England and France Project, known as the Noyon Sacramentary (Add MS 82956), caught my attention. More precisely, the specific style of its two large unfinished initials made me do a double take.

Thanks to my AHRC-funded PhD studentship, which the England and France Project inspired, I was ideally placed to make an art-historical connection that does not appear to have been made before. I noticed that the line-drawn initials of the Noyon Sacramentary are remarkably similar to the initials of some of the most famous manuscripts decorated in the so-called Franco-Saxon style.

An unfinished initial V (for the Vere dignum opening) at the beginning of the Canon of the Mass (Noyon, 4th quarter of the 10th century): Add MS 82956, f. 6v. Add MS 86956 was allocated to the British Library by HM Government in lieu of Inheritance Tax under the Acceptance in Lieu (AIL) Scheme, 2007.

Despite developing on the Continent, this style integrates typically Anglo-Saxon or Insular decorative motifs (such as abstract animal decorations and interlace) with Carolingian elements. It was usually reserved for high-grade liturgical or biblical manuscripts and it flourished in mid-to-late 9th-century Francia (roughly modern-day France and parts of western Germany).

Unfinished initial ligature TE (for the Te igitur opening) at the beginning of the Canon of the Mass: Add MS 82956, f. 7v

A sacramentary contains the prayers that the celebrant, usually a bishop, needed to perform Mass and other liturgical ceremonies. The Noyon Sacramentary was made in the late 10th century for the use of Noyon Cathedral. It has mainly been studied for its liturgical content and its unusual dimensions. Its leaves are two and a half times as tall as they are wide: this unusual format perhaps made it a highly portable 'saddle-book', making it easier for the bishop to travel to and consecrate churches far away from the seat of his bishopric. 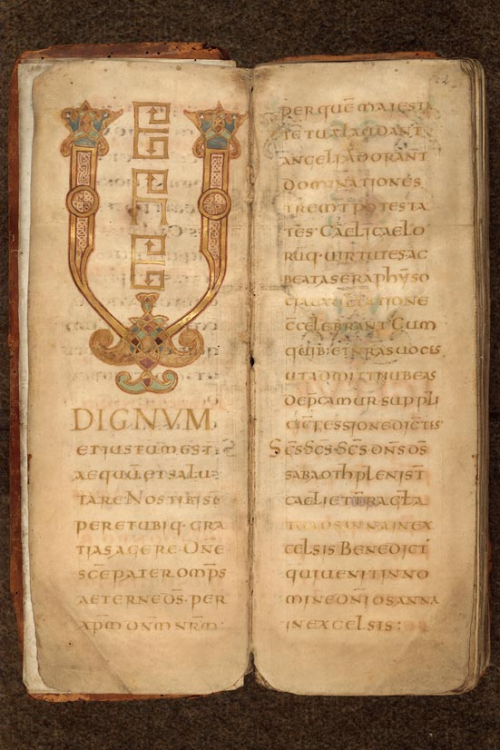 Another sacramentary with similar 'saddle-book' dimensions, but at least a century older, is now Cambrai, Bibliothèque municipale, MS 162. It was made at the Benedictine abbey of Saint-Vaast, one of the three centres in north-eastern France that excelled at the Franco-Saxon style. This manuscript has clear similarities with the Noyon Sacramentary, both in their unusual dimensions and their respective initial ‘V’ of the page with the words Vere dignum ('It is truly fitting'), a page that is marked with a large initial because it introduces the preface to the Canon of the Mass. Apart from the overall shape, this is seen in the stylised animal heads at the top of the two diagonal strokes of the ‘V’, and the roundels halfway down those strokes. 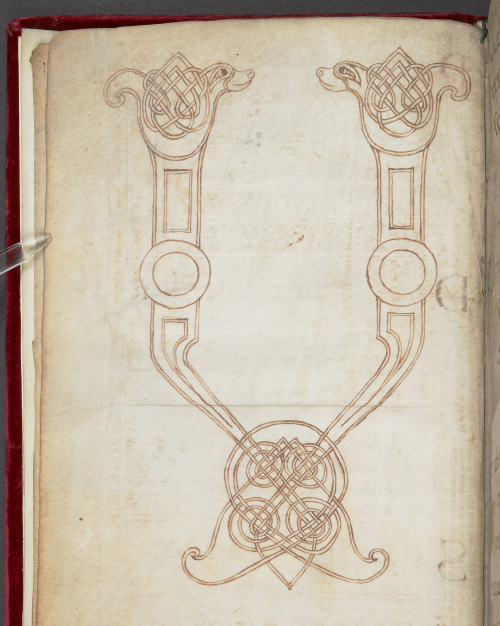 Can we speculate how this style came to inspire the makers of the Noyon Sacramentary in the 10th century? A possible model is another surviving sacramentary, now known as Reims, Bibliothèque Municipale, MS 213. This manuscript was also made for the use of Noyon Cathedral in the last quarter of the 9th century. However, it was made not at Noyon itself but as an export or commission at the Benedictine monastery of Saint-Amand, also in north-eastern France, another important centre associated with the Franco-Saxon style. 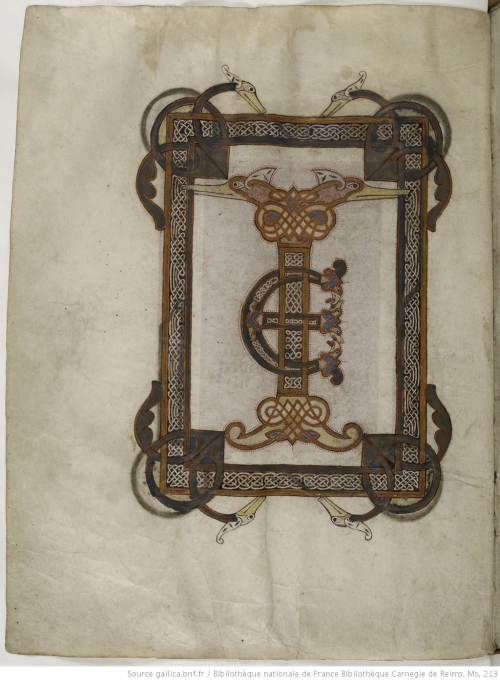 The words ‘Te igitur’ ('You, therefore') are the first words of the Canon of the Mass. The overall shape of the word ‘TE’ in the Noyon Sacramentary and in the Reims manuscript are very similar. This is shown, for example, by the intricate composition of overlapping interlace that unites the outer ribbons of the ‘T’ and the ‘E’. But there are differences in the details, if not in the overall style. The arm of the ‘T’ in the Noyon Sacramentary ends in small, dog-like animal heads, whereas the top of the ‘T’ in the Reims manuscript is dominated by the heads of birds with long beaks. It seems highly likely that the Reims sacramentary was still in the cathedral library in the 10th century and inspired the makers of the Noyon Sacramentary, even if it was not the direct model for it.

Why did the 10th-century makers of this manuscript adopt a style of decoration associated with a century-old manuscript? The Noyon Sacramentary was made during a period when the bishops of Noyon were closely affiliated with the first kings of the Capetian dynasty of the kingdom of Francia. The first Capetian ruler, Hugh Capet (reigned 987–996), was crowned at Noyon in 987, succeeding the last Carolingian king of West Francia, Louis V (reigned 986–987). 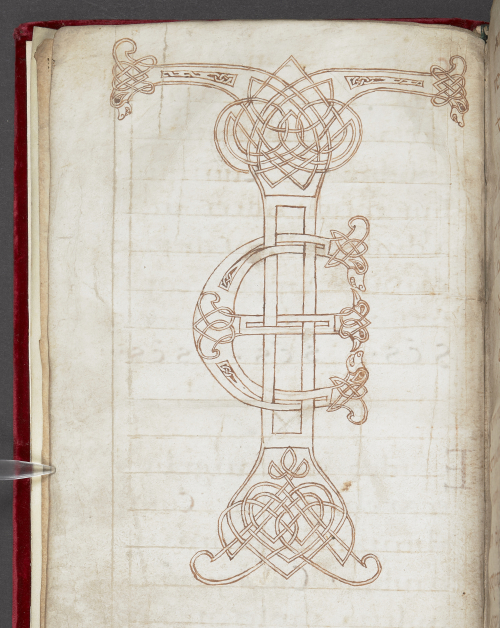 Noyon was probably chosen as the site of Hugh’s coronation to emphasise the connection to his distant ancestor, Charlemagne (reigned 768–814), whose first coronation was held there in 768. The older sacramentary (Reims, Bibliothèque Municipale, MS 213) was made around the reign of Charlemagne’s grandson, Charles the Bald (843–877). Charles the Bald was keen to promote favourable comparisons to his illustrious grandfather, for instance as a patron of manuscript art.

These political circumstances suggest that the use of Franco-Saxon style initials in the Noyon Sacramentary may have been part of a deliberate attempt to evoke continuity with the previous Carolingian period, in the history of both the cathedral and the kingdom.

You can discover more about 800 illuminated manuscripts from the collections of the British Library and the Bibliothèque nationale de France, all newly digitised, on our dedicated webspace: Medieval England and France: 700-1200.