The RSPB has reported that the crane is coming back to Britain, with a record number of new birds reported in recent years. We have similarly found many cranes hidden in the British Library’s medieval bestiaries, manuscripts full of fantastic stories about all manner of birds and beasts.

A bird with great wings and long thin legs, the crane’s Latin name — grus — was thought to derive from the hoarse cry of her voice. The Polonsky Foundation England and France Project has created an animation that tells the story of the life of the bird and her flock, based on an account in an illustrated bestiary (Harley MS 4751).

Cranes are not solitary creatures. They fly together as a flock, arranging themselves with military discipline high up in the air. According to this medieval bestiary, the birds swallow sand before they take off. Watch the animation to find out why. 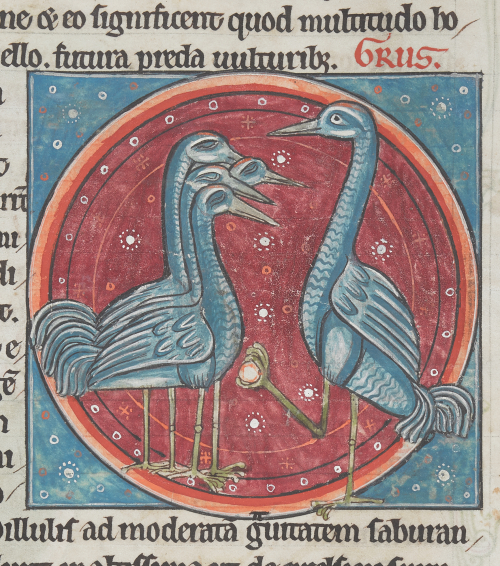 A crane guards the rest of her flock, holding a rock in her claws, in a bestiary with additions from Gerald of Wales’ Topographia Hibernica (Salisbury, late 12th century–early 13th century): Harley MS 4751, f. 39r

At night, the cranes are known for keeping a careful watch, guarding their camp and looking over the rest of the flock as they sleep. Other birds act as sentries, looking out for any enemies who might attack them. When there is cause for alarm, the cranes call out, to wake the rest and make sure they are safe. 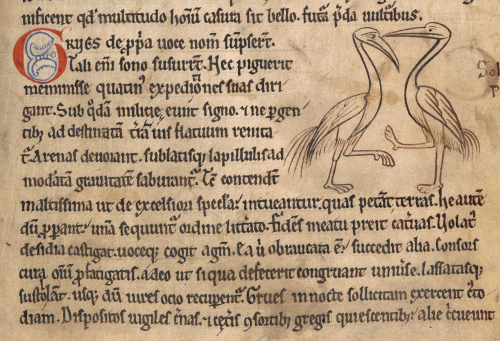 A pair of cranes alongside a Latin description of the bird in an early illustrated bestiary (England, 4th quarter of the 12th century): Add MS 11283, f. 17r

On duty, the crane has a particularly surprising way of keeping awake: she holds a stone in her claws. If she falls asleep, the stone will fall to the ground, make a noise and wake her up. Representations of this behaviour were common in early medieval bestiaries, and the crane’s vigilance and loyalty to her flock were regarded as particularly admirable traits. 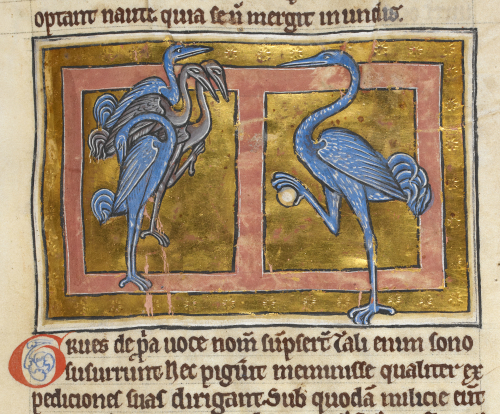 We would love you to explore more stories of birds and beasts from the bestiary. Check out this brilliant discussion on our website, entitled Beastly tales from the medieval bestiary.