Saints, kings and a bonnacon at Longthorpe Tower

In a previous blogpost, Snakes and Scrolls, we compared iconography in British Library manuscripts to medieval wall paintings in a little church in Houghton-on-the-Hill, Norfolk. There are churches all over Britain containing hidden gems of medieval art, sometimes fragmentary, sometimes astonishingly fresh, and these treasure troves are lovingly cared for and nearly always kept open for visitors by the local communities. Many images recall the manuscript miniatures in our collections.

Not long ago, guidebooks in hand, I made an astonishing discovery down a suburban road in the outskirts of Peterborough: Longthorpe Tower. This is not a church building but a fortified ‘solar tower’ adjoining a manor house, containing the ‘finest collection of domestic wall-paintings’ in Britain, according to Rosewell. 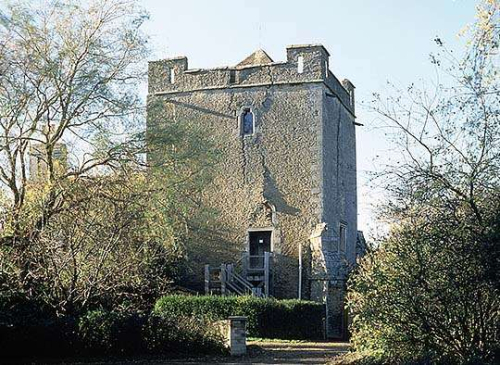 The Tower was part of a larger manor house built by the Thorpe family, peasants who purchased their freedom during the reign of King John (1199–1216) and increased their power and fortune by education and strategic marriages. Robert Thorpe, who rose to become lay steward of the powerful abbey of Peterborough and a knight of the realm, was able to add this prestigious status symbol to his manor house; he commissioned the wall paintings between 1320 and 1340.

Entering the painted room on the first floor is like walking into the Queen Mary Psalter or along the margins of the Taymouth Hours. The images are an eclectic mix of religious, allegorical, fantastical and heraldic imagery on a scale that is startling in comparison to the tiny, exquisite miniatures in manuscripts. The colours are faded, but many of the details and even some facial expressions are still visible.

One of the most recognizable images is a brooding representation of the Three Living and the Three Dead (for more on this popular medieval allegory, see our previous blog post). In this version of the scene, a crowned king is shown admonishing the three corpses (traces of a second king can be seen behind). 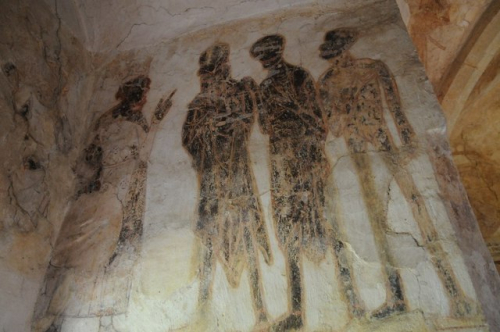 The wall painting is similar to this image from the Taymouth Hours, in which a younger-looking man holds out his hand and the three dead wave back jauntily. 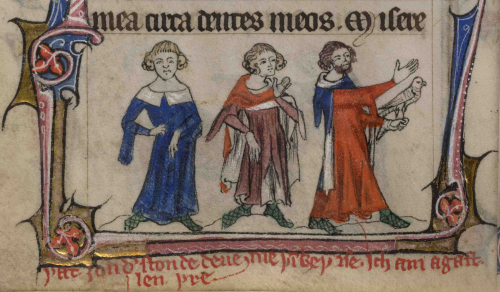 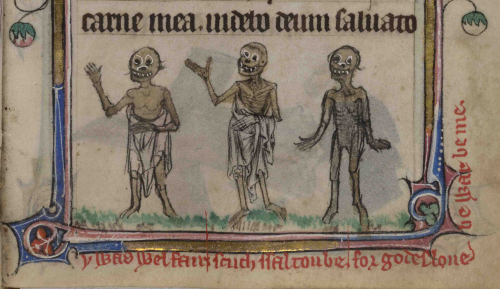 Miniatures of the Three Living and the Three Dead, detail from the Taymouth Hours: Yates Thompson MS 13, ff. 179v–180r

Other familiar scenes are the labours of the months, depicted around an archway on one side of Longthorpe Tower. The clearest of these is on the lower left, a figure seated by the fire warming his hands (January). 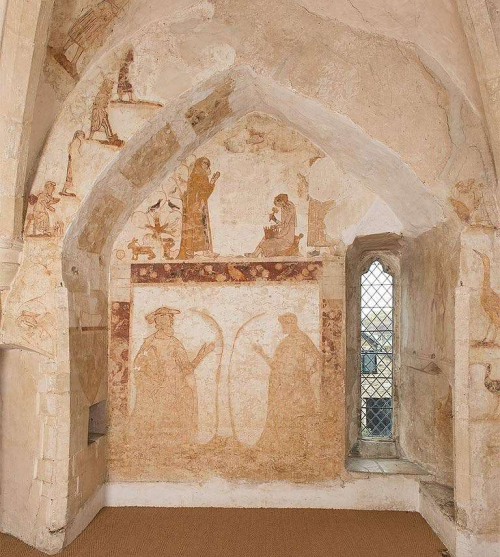 Wall paintings of the labours of the months and a scene from the life of St Anthony: Longthorpe Tower, English Heritage

This calendar image for January is found in many Psalters, including the Bohun Psalter and Hours, made not long after Longthorpe was built, for the de Bohun family of Essex. 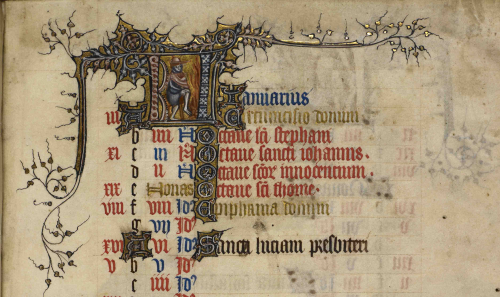 A figure warming his hands from the Calendar page for January, detail from the Bohun Psalter and Hours: Egerton MS 3277, f. 1r

In the upper part of the recess, below the labours of the months, is a scene from the life of St Anthony, the desert hermit. The saint is addressing a seated figure who is weaving, with birds and animals. Beneath are two standing figures, perhaps a pupil and teacher. The weaver probably represents the fact that Anthony was tempted by the devil with boredom, laziness and visions of women, which he overcame by the power of prayer. The weaver can be compared with this scene from the Luttrell Psalter, which shows women spinning and weaving.

The vault of the roof is covered with paintings that represent heaven along with musicians, including this very clear image of David playing his harp. 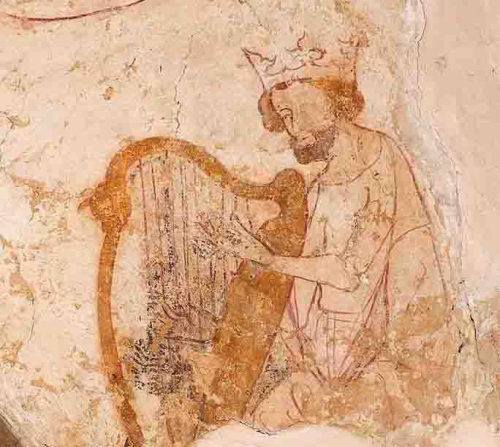 Beatus initials at the beginning of Psalter manuscripts often contain similar images. In this one from the Queen Mary Psalter, David’s facial expression and hands are very finely drawn, as they are in Longthorpe Tower. 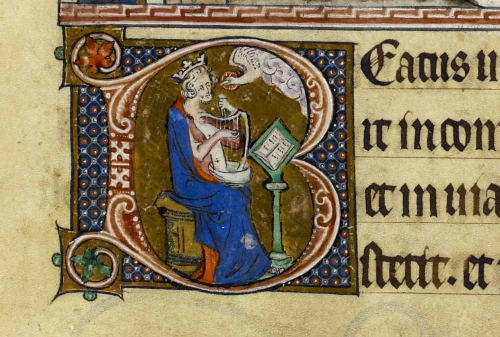 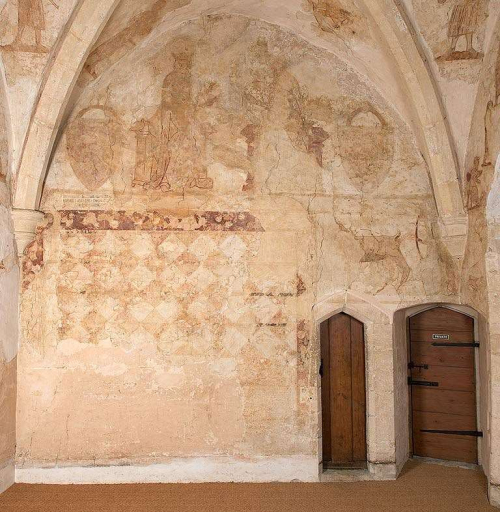 The south wall, next to the entrance, is painted with a trompe l’oeil cloth hanging that includes the Thorpe arms. Above it are two figures seated on thrones, identified by their arms as probably Edward III (left) and Edmund of Woodstock, Earl of Kent, executed in 1330 (right). Beneath is perhaps the only surviving wall painting of the mythical beast, the bonnacon (just the rear survives), at which an archer is aiming an arrow (only his bow is now visible). This image from a 13th-century bestiary contains a better-preserved image of the bonnacon. 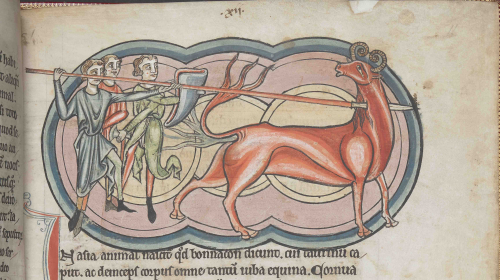 For those who have not seen previous blogposts on this popular subject, a bonnacon is a mythological beast that protected itself by emitting flaming excrement. It also features in our article, ‘Beastly tales from the medieval bestiary’, on The Polonsky Foundation England and France Project website.

There are many more wonderful scenes in Longthorpe Tower including the ages of man, a wheel of the senses, a spider's web, an ostrich, a monkey and many more. All of these subjects are illustrated in manuscripts in the British Library, and can be found by searching our Catalogue of Illuminated Manuscripts and Digitised Manuscripts website.

These three books are my guides to medieval wall paintings and where to find them: