For International Women’s Day, we have decided to celebrate women across the world in our own distinctive way. Greek papyri recount many stories of the past, shedding light on everyday life in Ptolemaic, Roman and Byzantine Egypt, told through the voices of the ancient people themselves. Here we have selected a few texts on papyrus from the British Library collections, where women are the protagonists. These mini-stories offer a varied picture of the ancient woman: from the independent to the weak, from the one seeking justice to another asking for compassion, from the bride to the divorced. 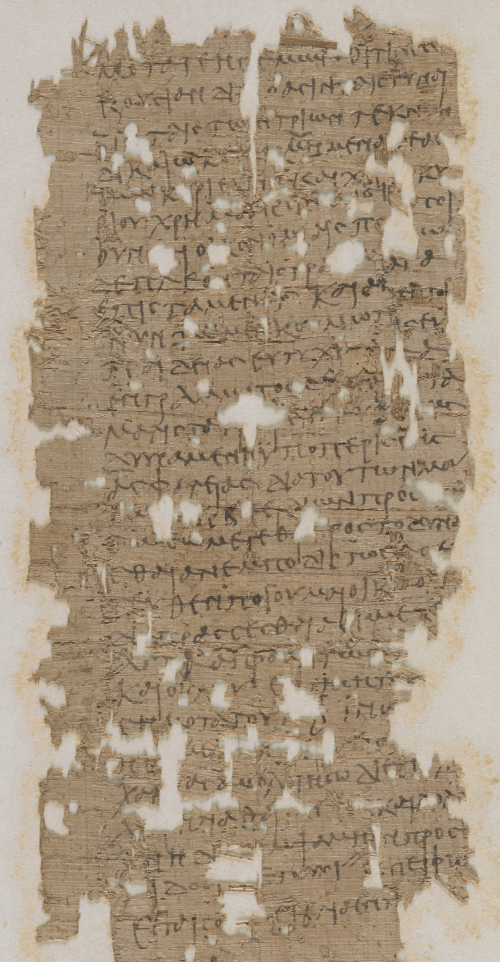 In this 3rd-century papyrus from Oxyrhynchus, Aurelia Thaisous, also called Lolliane, states that she qualifies for the right to act independently in her legal transactions, without any male guardians, on the grounds of her having three children (ius trium liberorum). She seems proud of being able to write with a high degree of ease. This is the petition she presented to the prefect, which was to be kept in his office. 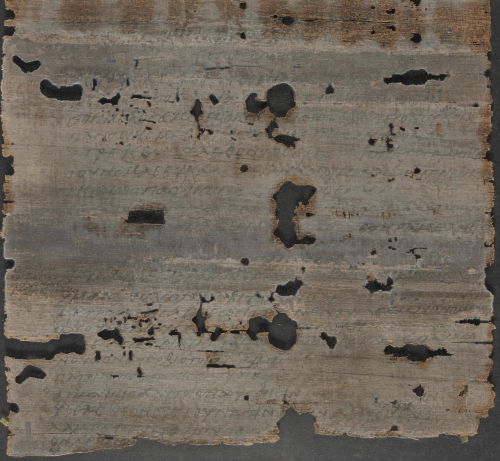 Patricia must have been extremely flattered when she read this acrostic poem (an epithalamion or wedding poem), composed by Dioscorus of Aphrodito on the occasion of her marriage to Paul. According to Disocorus, Patricia was more skilled than the Graces themselves, and her numerous virtues proved her relation to the gods. Paul was a very lucky man … 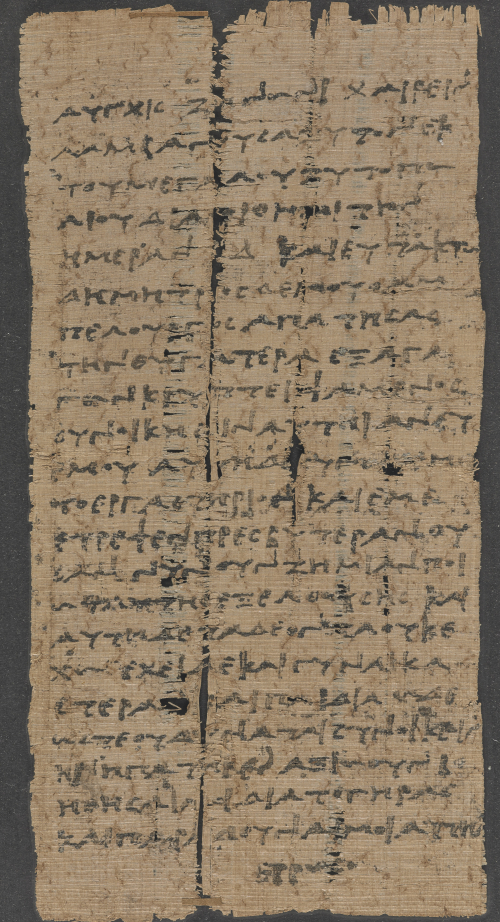 It was hard for Haynchis to manage a beer-shop all by herself, and at her age. Her daughter was the only help she had. A vine-dresser, Demetrius, had carried her daughter away, promising her the Moon. But guess what? He already had a family! He took her without Haynchis’ s consent, leaving her on her own and without life's necessities of life. In this petition, Haynchis made appeal to Zenon, manager of the estate of Apollonius, trusting that justice would be served and that her daughter would return. 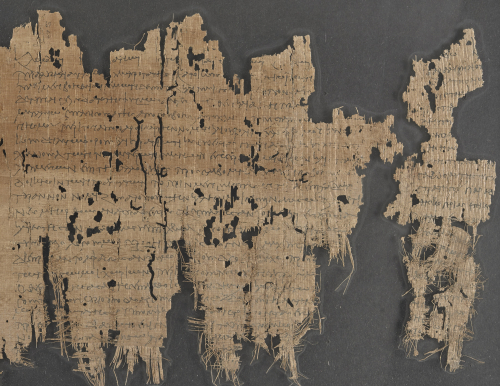 A wealthy widowed landowner, whose sons were serving in the army, hired two managers, Secundus and Tyrannus, to manage her estates. She trusted in their good faith but they turned out to be crooked, and they even robbed her of some of her possessions. Seeking justice, she appealed to Clodius Culcianus, prefect of Egypt, noting that women in particular should be helped because of their ‘natural weakness’. This is her petition, found at Oxyrhynchus. 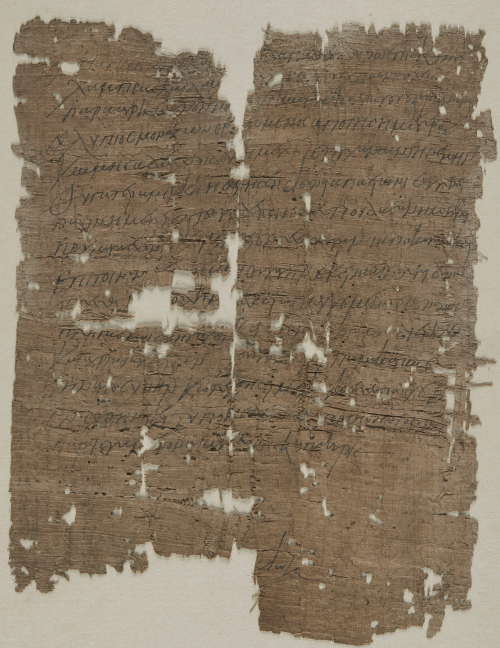 This papyrus tells an incredible story. It must have been difficult for Aurelia Nonna to rid her mind of these memories: the blows she had received, her dress being torn … Her nephew, Alypius, a monk, had wanted her little daughter to marry a relative, Apaion, whom she did not want to marry. When Nonna refused, he grew angry and started to beat her. But Nonna did not keep silent; she wrote to the bishop of Oxyrhynchus, as preserved in this petitition, denouncing these outrages and asking for the bishop's compassion. She was happy to accept whatever decision he made. 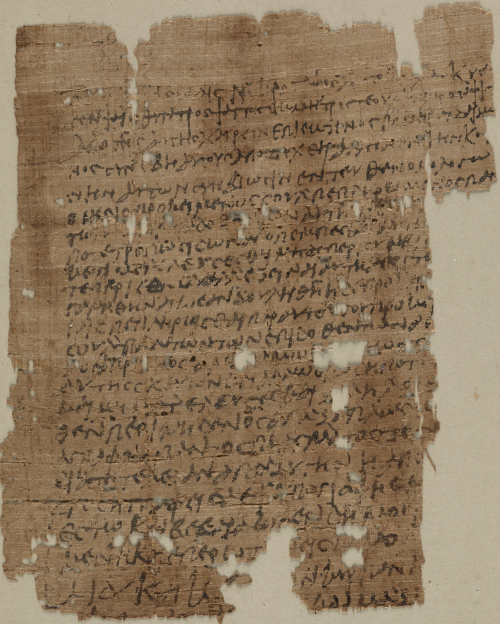 Senpsais and Aurelius Soulis would have promised to share a common life in mutual affection and respect, and it was neither’s fault that their marriage eventually ended. Their union was ruined by an evil spirit, and they agreed mutually to divorce. Senpsais returned all the wedding gifts to Soulis, as well as her dowry, and both were free one day to remarry. This papyrus contains the deed of divorce.

Valeria was afflicted by a grievous shortness of breath. Although she must have felt ill and weak, she had hope and faith. She sought healing through the prayers of father, Papnuthius, most valued and adorned with every virtue. This papyrus contains her letter to him. 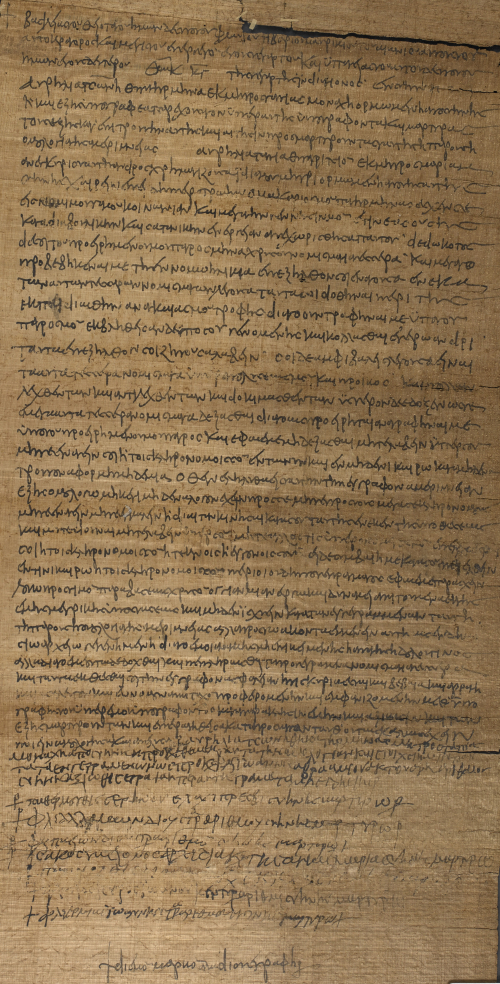 When Aurelia Tsone of Syene was a young girl, her parents divorced. Her mother, Tapia, had received money from her former husband for the maintenance of their daughter; instead, she seems to have thrown Tsone out of the house and started a new life. Once Tsone reached the legal age, she continued to claim the money owed to her. This papyrus acknowledges receipt of the money, proving that Tsone won the dispute.

These are just a few of the stories preserved in the British Library's papyri. For similar tales, we recommend that you read our blogpost 'The Voices of Ancient Women'.

Posted by Ancient, Medieval, and Early Modern Manuscripts at 7:55 AM