Two of the British Library’s medieval charters are currently on loan to an exhibition at the Jewish Museum in London. Jews, Money, Myth explores the role of money in Jewish life over the course of 2000 years. Drawing together art, film, literature, and artefacts from board games and cartoons to costumes and figurines, the exhibition follows the real and imagined stories of Jews — in finance, commerce and capitalism — up to the present day.

One of the loans (Add Ch 1251) is a Latin deed that records the partial repayment of the debt in November 1182 of Richard de Malbis (or Malebisse), a Norman landowner, to Aaron of Lincoln, one of the wealthiest men in England at the time. Malbis was later the principal instigator of mob violence against the Jewish community in York in 1190. 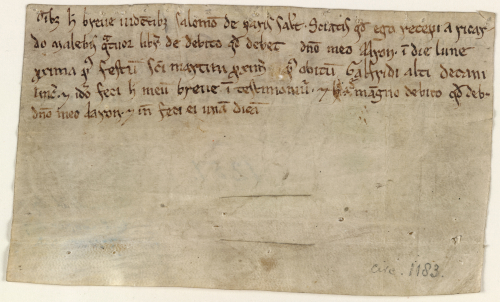 On the reverse of the deed, an informal Hebrew inscription by Solomon of Paris, an associate of Aaron of Lincoln, acknowledges the payment. Playing on the meaning of Malbis’ name in French (Mal Bete), Solomon states, ‘I have received £4 from Richard the evil beast … from his debt, the large one’. 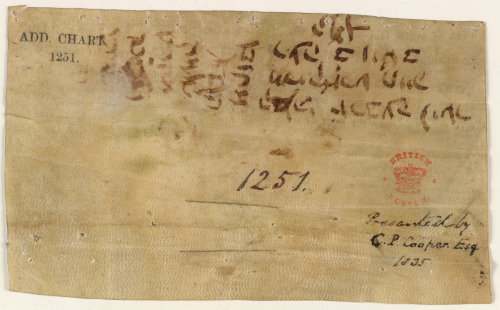 The second loan (Add Ch 71355) is a 13th-century legal document. A bilingual text written in Latin and Hebrew, it is a duplicate of a lost deed of lease of the land for the Jewish cemetery in Northampton, outside the town's north gate, and leased to the Northampton community by the local prior and the convent of St Andrew. The annual rent stated is half a mark, approximately £500 in today’s currency. 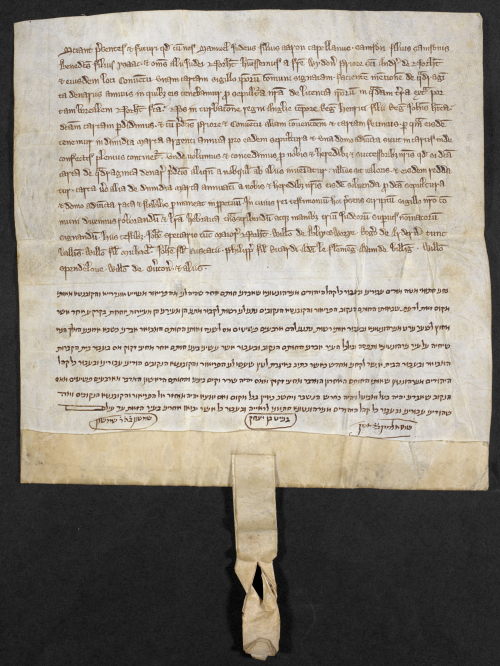 A nearby section of the exhibition examines Judas Iscariot, the disciple of Christ who betrayed him for 30 pieces of silver (Matthew 26:14-15). In the introduction to the exhibition catalogue, the curators explain that, beginning in the 12th century, ‘Jews began to be presented in Christian iconography as inherently attached to money’. Several reproductions from illuminated manuscripts included in this section show Judas with a bag of money, or his death. 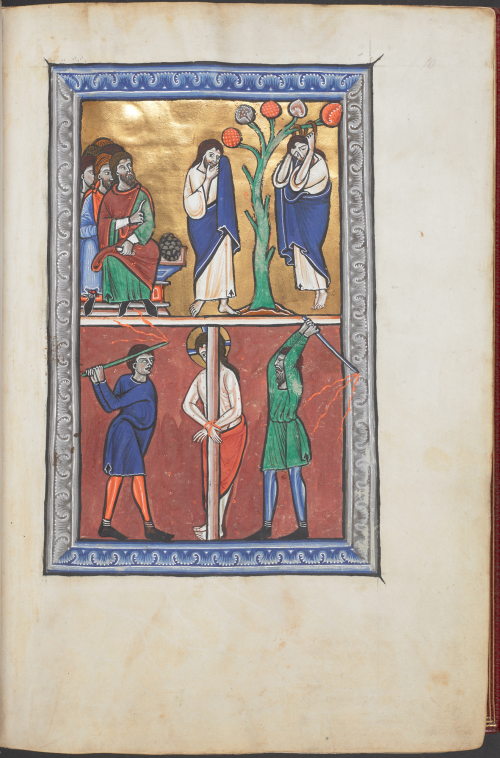 Judas leaves the High Priest and hangs himself, in a Psalter with the Hours of the Virgin, Oxford, 1st quarter of the 13th century: Arundel MS 157, f. 10r

One illustration is reproduced from a Psalter recently digitised as part of the England and France 700-1200 project funded by The Polonsky Foundation. It is one of 20 full-page illuminations that appear at the beginning of the manuscript, forming one of the most outstanding prefatory cycles to survive from the period around 1200. In this image, Judas is depicted with the infamous 30 pieces of silver, piled next to the High Priest. Judas then hangs himself from a tree, out of guilt at his betrayal of Christ. The scene is juxtaposed with a representation of Christ’s flagellation at the hands of the Romans in the panel below.

Also reproduced in the exhibition is an image from an opulent copy of the Biblia pauperum. The Biblia pauperum, or Bible of the poor, is a typological approach to the Christian Bible in which images illustrate how the Old Testament was seen to be both predictive of and more fully explained by the New Testament. The image featured in Jews, Money, Myth is a detail from the central image on this page, which compares the selling of Joseph to Potiphar to the selling of Christ by Judas. In the image, Judas holds a cloak with a large number of coins (although they are gold, rather than silver). The manuscript is described in more detail by Scot McKendrick & Kathleen Doyle, The Art of the Bible: Illuminated Manuscripts from the Medieval World (London: Thames and Hudson, 2016), no. 38.

For a fascinating discussion of Judas as ‘The Wickedest Man’, we highly recommend that you listen to Janet Robson’s Radio 4 broadcast from 2005. You may also be interested in her article, 'Fear of Falling: Depicting the Death of Judas in Late Medieval Italy', in Fear and its Representations in the Middle Ages and Renaissance, ed. by Anne Scott and Cynthia Kosso, Arizona Studies in the Middle Ages and Renaissance, 6 (Turnholt: Brepols, 2002), pp. 33–65.

Jews, Money, Myth is on show at the Jewish Museum, London, from 19 March until 7 July 2019. The exhibition catalogue is edited by Joanne Rosenthal and Marc Volovici (London: Jewish Museum, 2019).