The languages of history in the Middle Ages

Which languages were used to write history in medieval Europe? Who wrote history, for whom, and the history of what? Robert Bartlett will explore these questions in a lecture at the British Library in the Knowledge Centre on Friday 14 June, from 19:30 to 21:00.

Historical chronicles often recall and illustrate the account of the building of the Tower of Babel from the book of Genesis to explain the origins of multilingualism. According to chapter 11, the sons of Adam decided to ‘make a city and a tower, the top whereof may reach to heaven’ in order that they would become famous. But God decided to put a stop to their plans, and ‘there confound their tongue, that they may not understand one another's speech’. As a result, the place was called Babel (confusion), ‘because there the language of the whole Earth was confounded: and from thence the Lord scattered them abroad upon the face of all countries.’

The Histoire ancienne jusqu’à Cesar is the earliest compilation of universal history written in French, initially dating from the first decades of the 13th century. At this time French was used in many areas outside France, such as Flanders, England and Italy, and across the Mediterranean (for more on the Histoire ancienne, see our previous blog posts 'A Literary Giant' and 'A Flemish Chronicle Gone Wrong'). In a 14th-century Parisian copy of the Histoire ancienne (Add MS 25884), the Tower of Babel is presented as a complex technological achievement. In the image, the tower is almost complete. Its incredible height and elegant form could be seen to celebrate the collective achievement of the community of builders, before the confusion of languages caused them to abandon the construction. 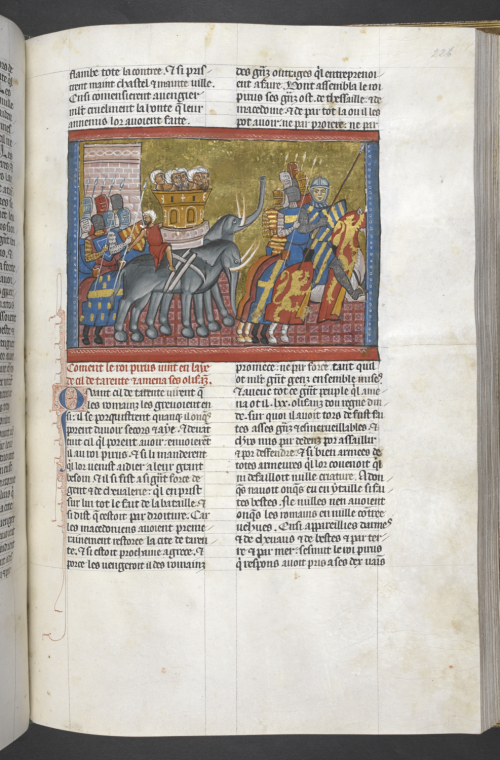 As Latin had long been the language of learning and textual authority, the choice of French prose for writing history suggests that lay aristocratic audiences were increasingly engaged in understanding the past. French language and culture reached all the way to the Holy Land, where it was imported by crusaders and merchants. One of our copies of the Histoire ancienne is from the city of Acre in the eastern Mediterranean (Add MS 15268), where French chronicles were read eagerly by the multicultural and multilingual communities brought together in this cosmopolitan port. 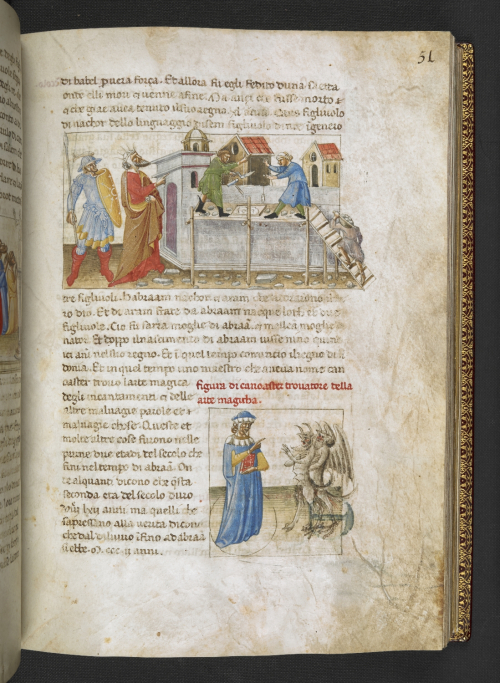 The Tower of Babel, above, and Zoroaster with two demons, below, in Il Tesoro: Yates Thompson MS 28, f. 51r

Influenced by the flourishing tradition of 13th-century French historical narratives, the Italian notary Brunetto Latini included an historical section in his encyclopedic Livre dou Tresor. His chapter on the Tower of Babel is derived from the version found in the Histoire ancienne. In 1260, Brunetto was exiled in France, where he composed the Tresor in French in order to reach a wider public. This vast encyclopedia is formed of three books, covering a variety of disciplines including theology, physics, astronomy and ethics.

Brunetto’s Tresor was extremely successful, and copies circulated widely across the Mediterranean. By the 14th century, it was translated into other vernaculars, notably Catalan and Castilian. However, one of the earliest translations of the Tresor was made in Brunetto’s home city, Florence, where he returned in 1267. The Italian Tesoro dates back to the 13th century, when the French version was available widely in Italy. This translation illustrates how French works fed into the multilingual literary culture of Italy, in the city of Brunetto’s student Dante, where the language that will be eventually called ‘Italian’ was emerging. A 15th-century Florentine manuscript of the Tesoro (Yates Thompson 28) was copied in 1425 by the scribe Bartolomeo di Lorenzo of Fighine. 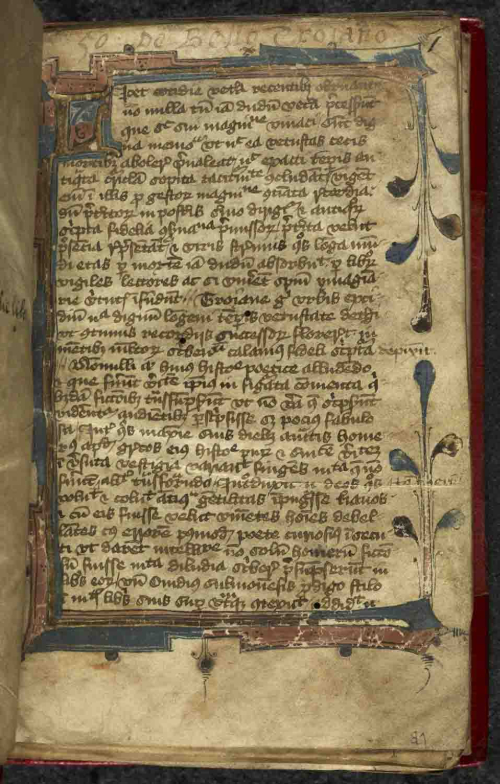 Guido delle Colonne’s Historia destructionis Troiae (‘History of the Destruction of Troy’) offers a different example of the movement of historical texts between languages. In 1287, the Sicilian judge and poet composed his Latin prose account of the Trojan War, which is a translation of the 12th-century French Roman de Troie, by Benoît de Sainte-Maure. The Historia Destructionis Troiae was enormously popular across Europe and demonstrates how vernacular culture revitalised contemporary Latin historical writing.

Over 90 copies of Guido’s Historia survive. The success of Guido’s translation also suggests a preference in some circles for Latin as opposed to local languages, even as the local language (in this instance Italian) emerges as a literary language. The work was even popular beyond Italy, as demonstrated in an English copy made around 1400 (Harley MS 176).

Around this time, John Lydgate translated the Historia into English verse. He completed his version in 1420 and gave it the title ‘Troy Book’. This 15th-century illuminated English manuscript contains a particularly fine copy of Lydgate’s Troy Book, compiled with other works by the same author. 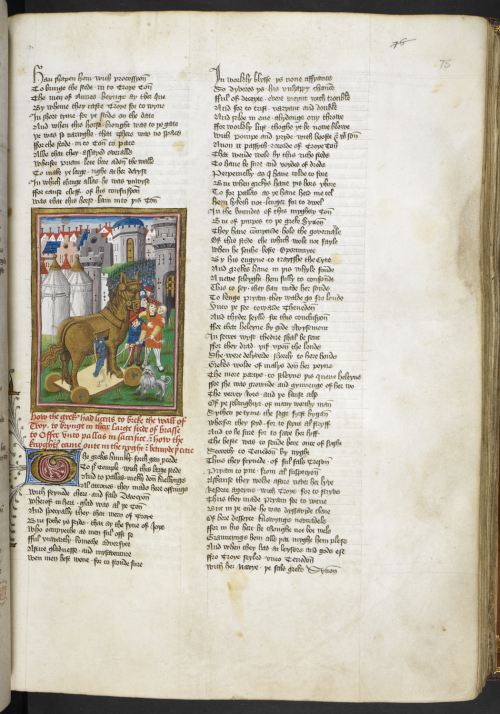 Professor Bartlett’s talk is presented in conjunction with the ‘Narrating History Across Languages in Medieval Europe’ conference at Kings College London, 14-15 June, organised by The Values of French, a research project funded by the European Research Council at King’s College London. The conference will cover a range of geographic and linguistic traditions, including Catalan, Castilian, French, German, Greek, Latin and Sicilian.

You can learn more about the use of French in the Middle Ages in The Polonsky Foundation England and France article on the subject, in partnership with