Reunited at last: the Percy Hours and Percy Psalter

It is always exciting to acquire a new manuscript for the collection. But to acquire a new manuscript and reunite it with its long-separated other half is no less than thrilling. The Percy Psalter (Add MS 70000) and the Percy Hours (Add MS 89379) were created as a single-volume Psalter-Hours in the late 13th century. They formed one manuscript for around 500 years, until a 19th-century book dealer split them in two and sold the halves into separate private collections. The British Library acquired the Percy Psalter from the New York collector Clark Stillman in 1990. We are delighted to announce that we have now purchased the Percy Hours from the estate of the London collector Stephen Keynes, bringing the two manuscript halves together for the first time in around 200 years. 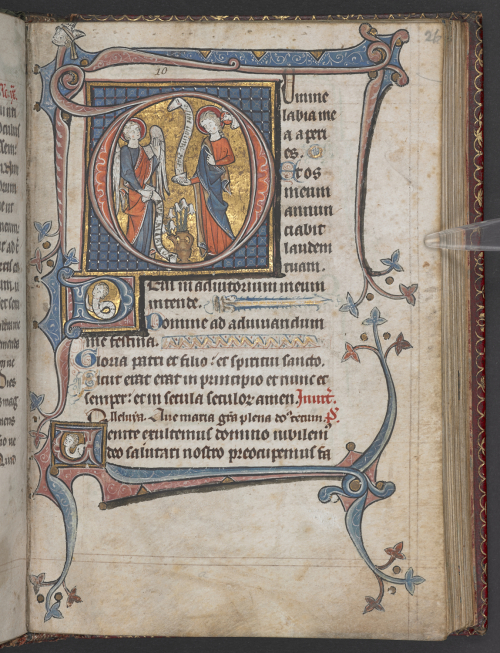 The Hours of the Virgin, with a historiated initial showing the Annunciation: the Percy Hours, Add MS 89379, f. 26r

This reunion is all the more satisfying because the Percy Psalter and Hours are historically important and stunningly beautiful. They were made in York towards the end of the 13th century as a prayer book for a branch of the aristocratic Percy family. Lord and Lady Percy are depicted on the opening page of the Psalter, proudly displaying their coats of arms. 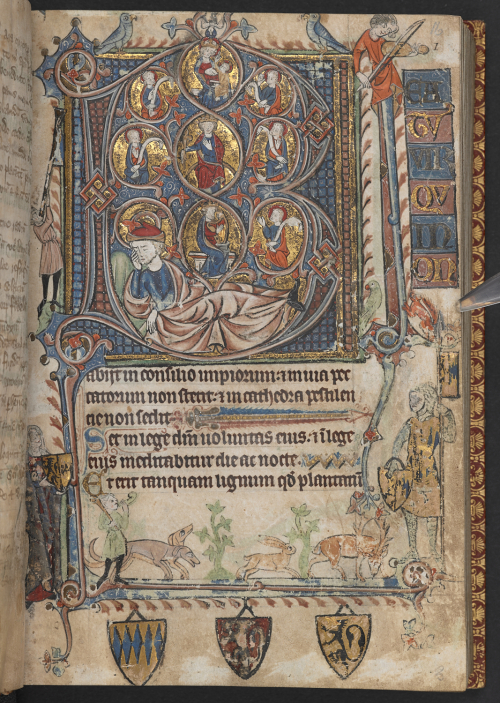 Psalm 1 with a historiated initial showing the Tree of Jesse; below, patron portraits and a stag hunt: the Percy Psalter, Add MS 70000, f. 16r

The manuscript was made at a moment of great change in book history. Devotional books were rapidly gaining popularity among wealthy laymen and women. At first these aristocratic patrons adopted the Psalter as their preferred book of personal devotion, inspired by monastic practices. Other essential texts were often included, such as a calendar for keeping track of different saints’ feast days, and the Office for the Dead for praying for the souls of departed loved ones. As the 13th century progressed, it became common to supplement the Psalter with the Hours of the Virgin, a series of prayers addressed to the Virgin Mary that were recited at set hours of the day and night. This resulted in the Psalter-Hours — a deluxe all-in-one collection of texts for personal devotion. 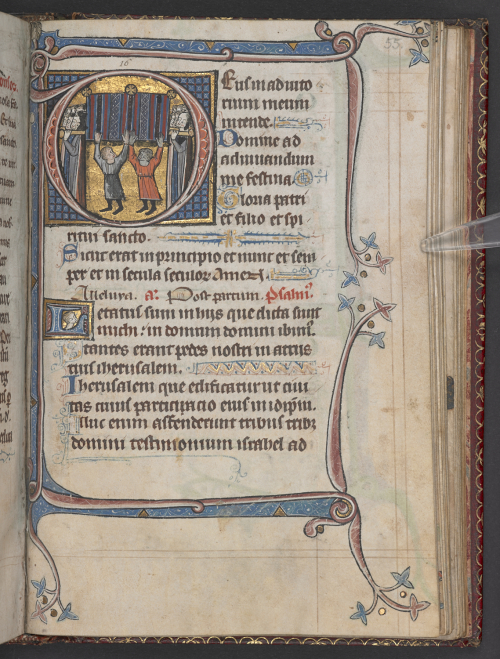 The Hours of the Virgin, with a historiated initial showing the funeral procession of the Virgin Mary: the Percy Hours, Add MS 89379, f. 55r

The Percy Psalter-Hours is a rare and early example of this class of devotional book from northern England. The growing market for books in the 13th century led to professional workshops of scribes and illuminators appearing in cities around the country. The British Library has an outstanding collection of manuscripts made in regional workshops such as Oxford, London and East Anglia. But examples from the North are comparatively rare. The Percy Psalter-Hours was created by a well-organised team of scribes and artists, working in the latest styles. It reveals that northern book production was just as sophisticated as elsewhere in England. 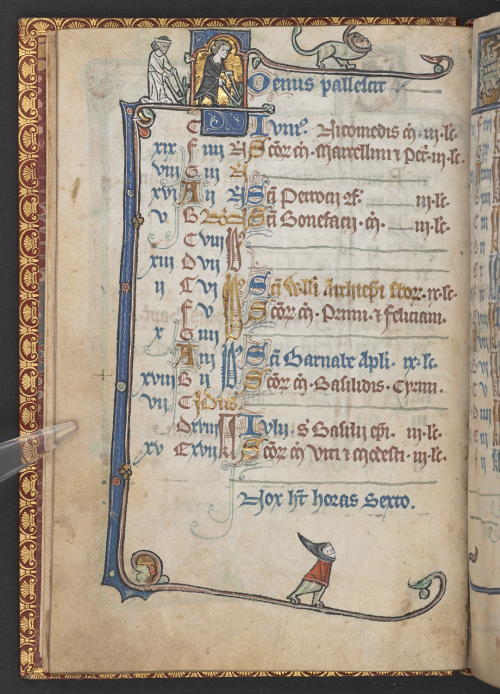 The manuscript also displays some unique features of northern devotion. For example in the calendar, the feast days of former archbishops of York Sts Wilfrid (24 April and 12 October), John of Beverley (7 May) and William of York (8 June) are marked in glittering gold letters. Some of the feasts are so local that they do not appear in calendars anywhere else, such as the feasts of the Yorkshire abbess St Everild (9 July) and the York Feast of Relics (19 October). St William of York is also commemorated with a prayer in the Hours (f. 42v). Another important local feature is that the Hours of the Virgin follows a slightly different version (or ‘Use’) than elsewhere. It is thought that this manuscript preserves the earliest surviving example of the Hours of the Virgin of the Use of York. 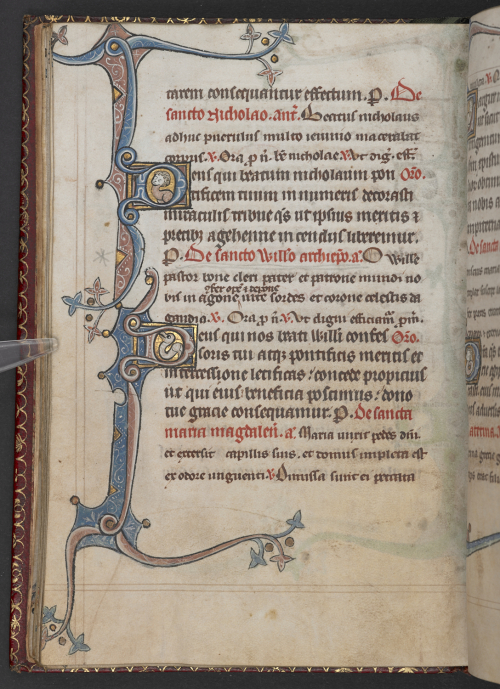 Perhaps the most appealing feature of the manuscript is its artwork. In both the Psalter and Hours, each major text opens with a letter containing a miniature scene from a religious narrative. Graceful figures in jewel-like colours are set against backgrounds of shimmering gold. Some may give a clue to the religious affiliations of the original owners. For example, an image at the beginning of the Penitential Psalms shows a man confessing to a Dominican friar, identified by his black habit. This may suggest that the owners had a Dominican confessor. 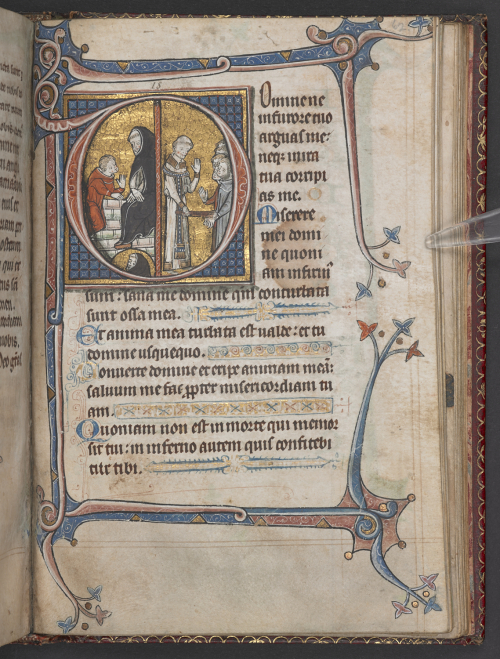 In contrast to the serene images in the initials, the margins of both the Psalter and Hours portions of the manuscript are inhabited by boisterous scenes of animals and hybrid monsters fighting, playing musical instruments, or simply wandering by. It’s hard not to smile when you open a page and are greeted with these lively creatures.

We are very pleased to have acquired the Percy Hours and to have finally reunited it with the Percy Psalter in the national collection. You can view both of these manuscripts in full on our Digitised Manuscripts website, and we plan to display them in the Library’s Treasures Gallery later this year. We are extremely grateful to the British Library Collections Trust for generously supporting the acquisition of the Percy Hours.

This is the second of two exciting acquisitions from the estate of Stephen Keynes. For the first, see our earlier announcement on the Medieval Manuscripts Blog.