Book of Beasts at the Getty

Bestiaries are one of the most popular medieval texts, describing the characteristics and habits of beasts real and imagined. We are delighted to say that the British Library has loaned six manuscripts to an exciting new exhibition at the J. Paul Getty Museum in Los Angeles. Book of Beasts, curated by Elizabeth Morrison and Larisa Grollemond, explores the wonders of the medieval bestiary tradition, drawing together manuscripts, tapestries and paintings, as well as a variety of other objects.

Two of these British Library loans are magnificent 13th-century English bestiaries. The first (Royal MS 12 C XIX) contains over 80 illustrations of beasts, birds and fish, painted in gold and bright colours. This bestiary is accompanied by several theological works, including extracts from the Book of Genesis and the Etymologies of Isidore of Seville (c. 560–636), as well as a number of medical recipes. In the page illustrated here, it tells us that the camel can endure thirst for three days, and that it prefers to drink muddy water. 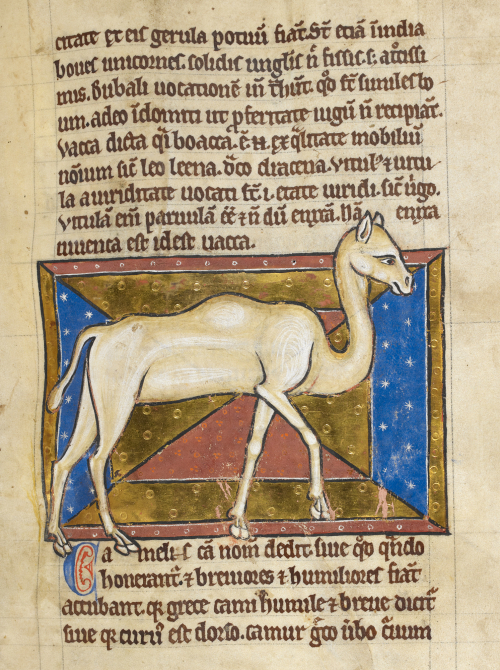 The second manuscript (Royal MS 12 F XIII) is now known as the Rochester Bestiary, because it belonged to the cathedral priory of St Andrew, Rochester. This manuscript includes 55 finished illustrations, although there were spaces left for 126 in total, some with added instructions in Frecnch to an illuminator. The bestiary is followed by a lapidary (an account of the properties of precious stones), written in Anglo-Norman French. 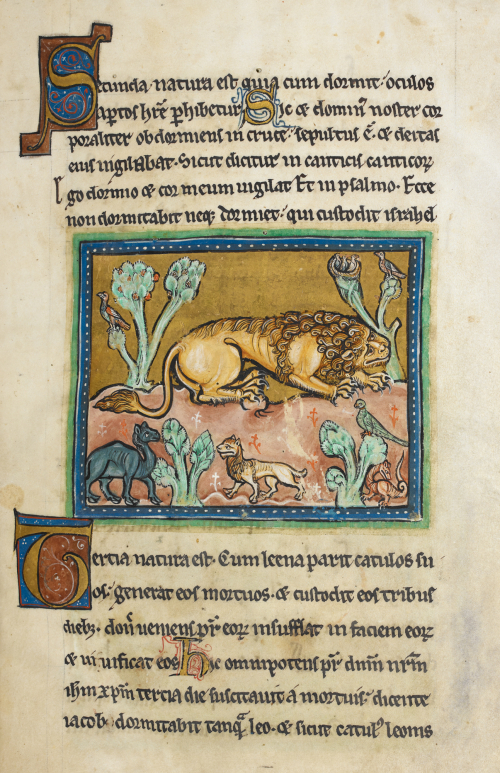 The lion (the king of the beasts) is usually the first animal to be described in a bestiary, as found in the Rochester Bestiary (c. 1230): Royal MS 12 F XIII, f. 4r

Medieval bestiaries were produced in many different forms. Another of the manuscripts on loan to the Getty contains an illustrated aviary (or text about birds) by Hugh of Fouilloy (Sloane MS 278). It is combined with the Dicta Chrysostomi, which survives in very few manuscripts from this period and contains only a small number of accounts of animals, discussed across 27 chapters. Although the title of this text — The Words of John Chrysostom on the Nature of Beasts — suggests that its author was St John Chrysostom, who lived during the 4th century, it was actually written in France around the year 1000. 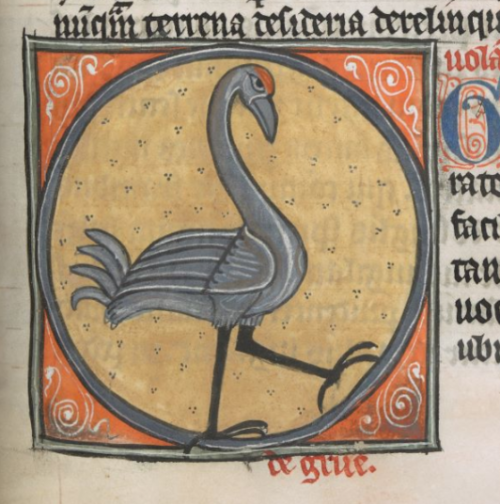 A watchful crane raises its foot, in a bestiary with Hugh of Fouilloy’s Aviarium (northern France, 2nd or 3rd quarter of the 13th century): Sloane MS 278, f. 27r (detail)

Another bestiary is featured in the theological miscellany pictured below (Harley MS 3244). Made in the middle of the 13th century, the volume is a compilation of texts intended for a Dominican friar, who is depicted kneeling before Christ on f. 27r. Many of its 133 illustrations have unique designs; it includes more images of fish and insects than most other bestiaries that survive from this period, as well as a number of additions to the text itself. The Getty Museum's exhibition examines how artists adapted the stories and images of the bestiary for use in other medieval manuscripts and artworks. For example, we have also loaned an illustrated collection of treatises on heraldry, compiled around 1494 by a certain Adam Loutfut, a Scottish scribe in the service of Sir William Cummyn of Inverellochy (Harley MS 6149). One of its treatises describes the animals that most commonly appear on medieval coats of arms, many of which derive from the bestiary tradition. The final volume in this selection is known as ‘The Northern French Miscellany’ (Add MS 11639), a lavishly illustrated manuscript containing a variety of biblical and theological texts in Hebrew. Numerous inhabited initial-word panels appear throughout the book, some featuring vibrant images of birds and beasts, whose designs are stylistically very similar to the illustrations of bestiary manuscripts. 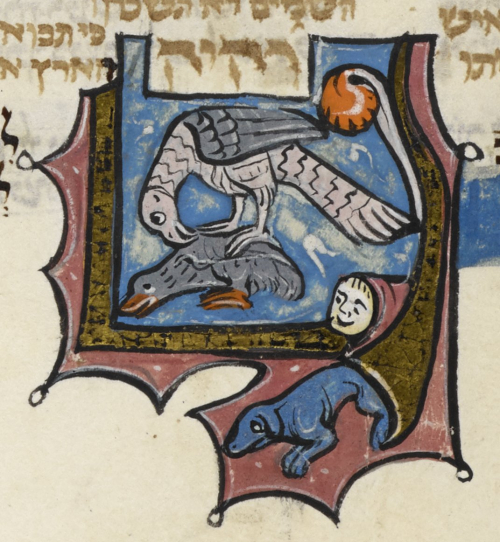 An eagle lands upon an unsuspecting duck in this inhabited initial-word panel, from the Northern French Miscellany (southern Germany or France, 1277–1324): Add MS 11639, f. 107r

To explore more of the stories from the medieval ‘book of beasts’, check out our animations about the lives of the Crane and the Whale, both based on accounts and illustrations from another early illustrated bestiary (Harley MS 4751). Our own website also features an article written by Beth Morrison, Senior Curator of Manuscripts at the Getty Museum, 'Beastly tales from the medieval bestiary'.

Book of Beasts is on at the Getty Center until 18 August. We'd love you to catch it if you're in California this summer.