In recent months, the British Library has started to revise the online catalogue descriptions of manuscripts in the Harley collection. Sold to the nation in 1753, the Harley manuscripts form one of the Library's foundation collections. The collection comprises more than 7,000 manuscripts, 14,000 charters and 500 rolls, spanning the period from the 8th to the 17th centuries. Some of these manuscripts are already well-known — such as the Harley Psalter (Harley MS 603), the 'Book of the Queen', containing the works of Christine de Pizan (Harley MS 4431), and the Book of Thomas More (Harley MS 7368) — but many of them have received less attention than they deserve. Our cataloguing project aims to make them more accessible. 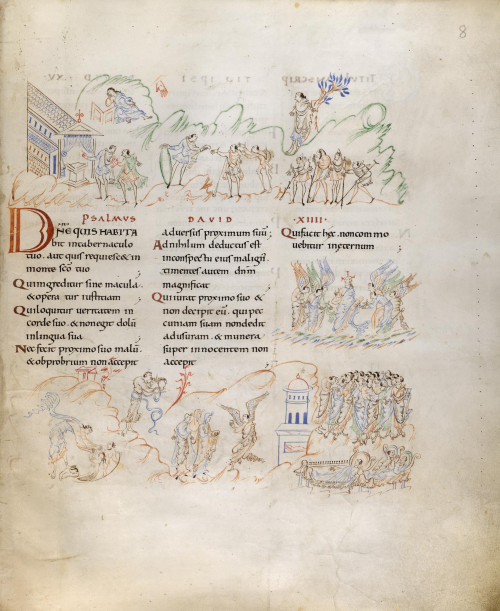 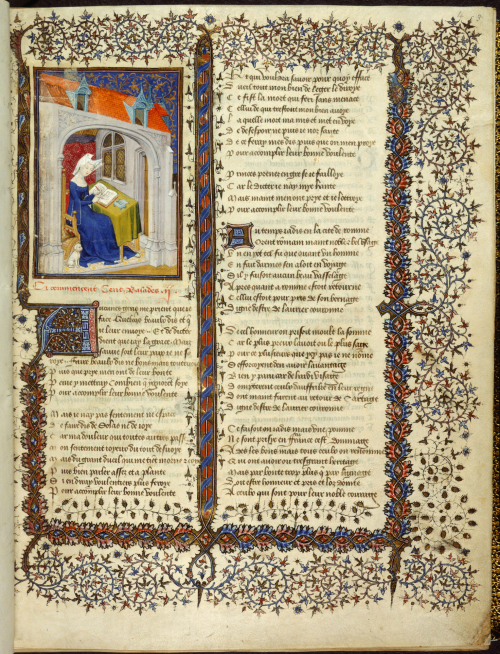 Two famous manuscripts in the Harley collection: the Harley Psalter (Harley MS 603, f. 8r) and the 'Book of the Queen', with a miniature of Christine de Pizan (Harley MS 4431, f. 4r)

The Harleian library was founded in October 1704, when Robert Harley (1661–1724) purchased more than 600 manuscripts from the collection of Sir Simonds d’Ewes (1602–1650). In 1711, Harley was made 1st Earl of Oxford and Mortimer; after that date, his son, Edward Harley (1689–1741), was most active in augmenting the collection. The 1710s saw further groups of important English manuscripts enter the library, and from about 1717 the Harleys began using overseas agents to purchase manuscripts from Continental Europe, especially France, Germany and Italy. Numerous important British and foreign collections were auctioned in London in the 1720s, allowing further acquisitions. 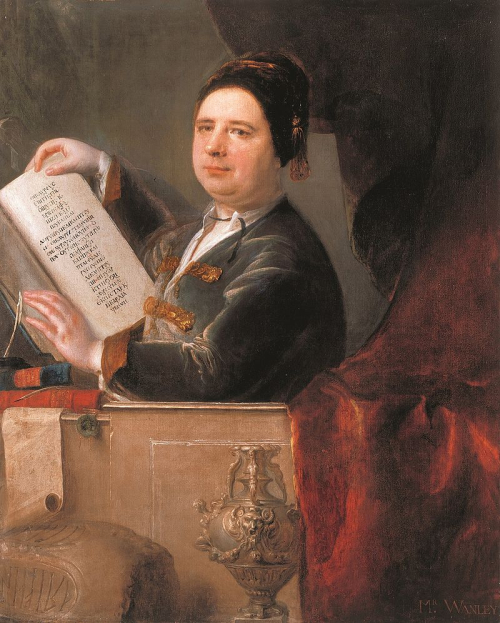 A painting of Humfrey Wanley by Thomas Hill, at the Society of Antiquaries: Wanley holds a Greek lectionary, while the Guthlac Roll (Harley Roll Y 6) hangs by his side

A prominent role in the formation of the library was played by Humfrey Wanley (1672–1726), who became library-keeper to the Harleys in 1708. His diary (Lansdowne MSS 771–772) and letters are an important resource for understanding the growth of the collection.

Edward Harley bequeathed the library to his widow, Henrietta Cavendish Harley, countess of Oxford and Mortimer (1694–1755), during her lifetime, and thereafter to their daughter, Margaret Cavendish Bentinck, duchess of Portland (1715–1785). In 1753, the manuscripts were sold by the Countess and the Duchess to the nation for £10,000 under the Act of Parliament that also established the British Museum. 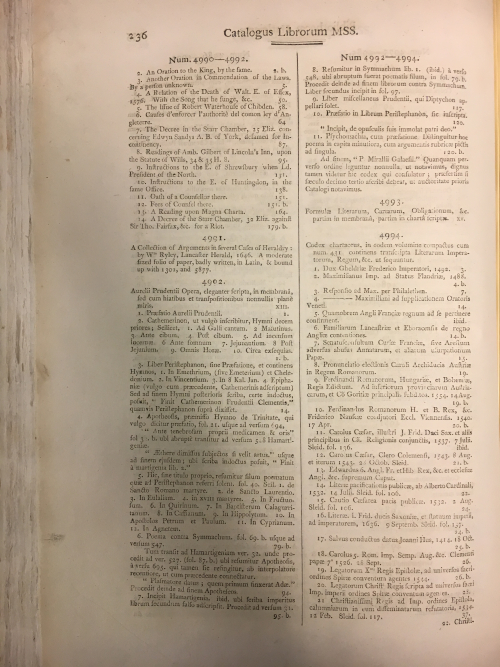 A page from the printed catalogue of the Harley manuscripts, published in 1808, showing the descriptions of Harley MSS 4990–4994

The Harley manuscripts were described systematically in the catalogue printed in four volumes between 1808 and 1812. This reference tool is a product of its own time, and is of limited use for modern users. Some of the Harley manuscripts have been catalogued and digitised in recent years (for example, by The Polonsky Foundation England and France Project), but the vast majority have not been described since the 19th century. Our cataloguing project will create new online records for these manuscripts, as well as augmenting existing descriptions on the Catalogue of Illuminated Manuscripts.

As time progresses, the new records of the Harley manuscripts will be made available on the Library's Explore Archives and Manuscripts online catalogue. We have started by focusing on manuscripts referenced in surveys such as Andrew Watson’s Catalogue of Dated and Datable Manuscripts c. 700-1600 in the Department of Manuscripts, the British Library (London, 1979), and in Ruth Dean & Maureen Boulton’s Anglo-Norman Literature (London, 1999). More records are being added every week.

Many manuscripts were described inadequately in the printed catalogue, which we are now attempting to remedy. For example, one 15th-century manuscript containing a fragment of an important textbook about rules for teaching correct French, was previously described as: ‘Formulas of letters, charters, obligations, etc, partly on parchment, partly on paper. 15th century.’

We have now been able to identify this textbook as the popular Orthographia Gallica, sometimes attributed to Thomas Sampson, a 14th-century teacher of letter writing at Oxford. 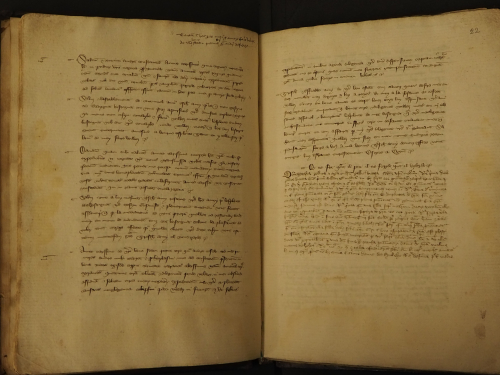 Meanwhile, this manuscript, described in the printed catalogue as a gospel-book, contains one of the earliest example of polyphonic music from England. 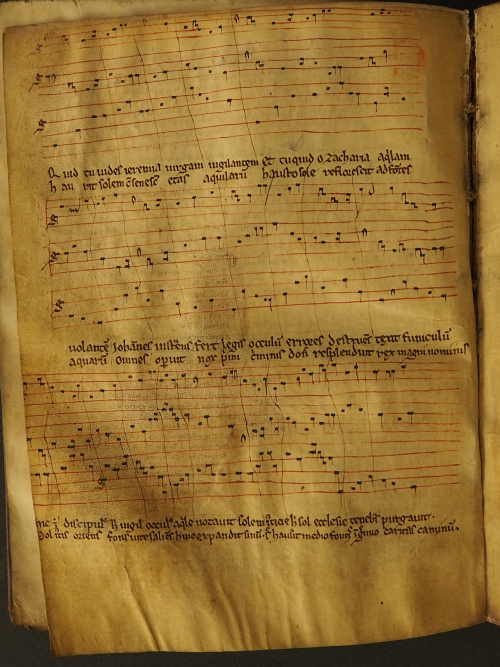 The Harley collection also contains some fascinating 17th-century manuscripts. Harley MS 1960 is a anthology of riddles written by members of the Holme family in Chester. One riddle reads: ‘ten teeth & neer a tongue, it is sport for old & yong: I pulled it out of my yellow fleece & tickled it well on the belly piece’. The solution is ‘one playing on a violin’. 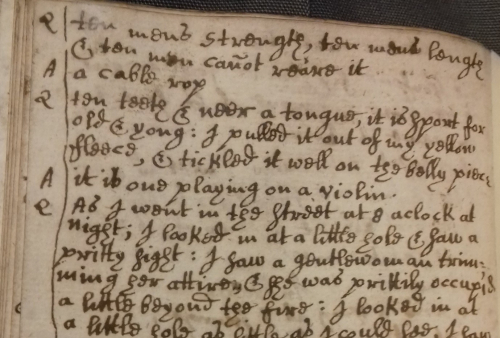 Some little-known manuscripts reveal unsuspected gems. For example, an ABC illustrated poem, in which each stanza features a richly decorated initial, is found in Harley MS 1704. 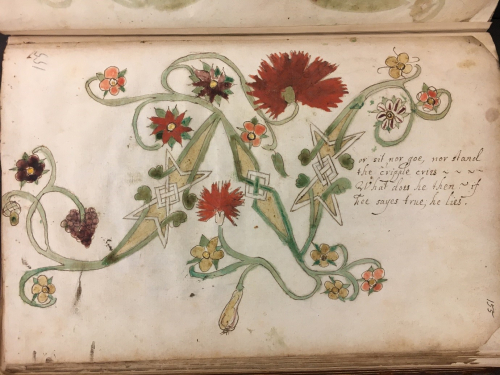 This decorated initial 'N' in a 17th-century manuscript is a reminder of the glory of medieval manuscript illumination: Harley 1704, f. 155r

As our cataloguing project progresses, we will publish more blogposts about our discoveries. We will also be tweeting about the Harley manuscripts via @BLMedieval, using the hashtag #HarleyMSS. Make sure you follow us closely.