Regular readers of our Blog may have noticed that animals are one of our favourite subjects, especially the weird and wonderful creatures that inhabit the Bestiary. Some of these creatures, like the unicorn or bonnacon, are no longer to be seen; but one of the strangest beasts is still thriving (though please don’t get too close) — the crocodile. The British Library's bestiaries contain a huge variety of images of these creatures, by medieval artists who were compelled to use their imagination  — after all, one rarely encountered a crocodile when fishing for eels in the Essex mud-flats in the 13th century!

A fairly realistic depiction of a crocodile is found in this bestiary, which was in the library of Rochester Priory in the 14th century and may have been made there. This manuscript, as well as two others described in this blogpost (Royal MS 12 C XIX and Harley MS 3244), is currently on display in the exhibition Book of Beasts at the Getty Museum in Los Angeles. 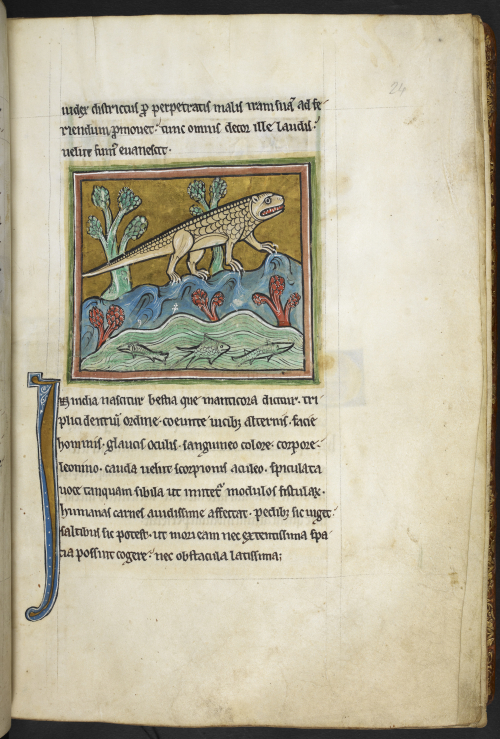 The crocodile is often accompanied by its enemy, a snake-like beast from the Nile, known as the hydrus. The text describes how, when a crocodile is asleep with its mouth open, the hydrus rolls in the mud to become slippery; it slithers into the crocodile’s mouth before being swallowed. It then begins to eat its way out, killing the crocodile in the process. In the bestiary tradition, animal behaviours are seen as moral allegories; in this case the crocodile’s mouth represents the mouth of Hell, while the hydrus is Christ, who enters through the gate of Hell to redeem lost souls. In this manuscript there are two drawings of crocodiles, one with the hydrus and the other eating fish. 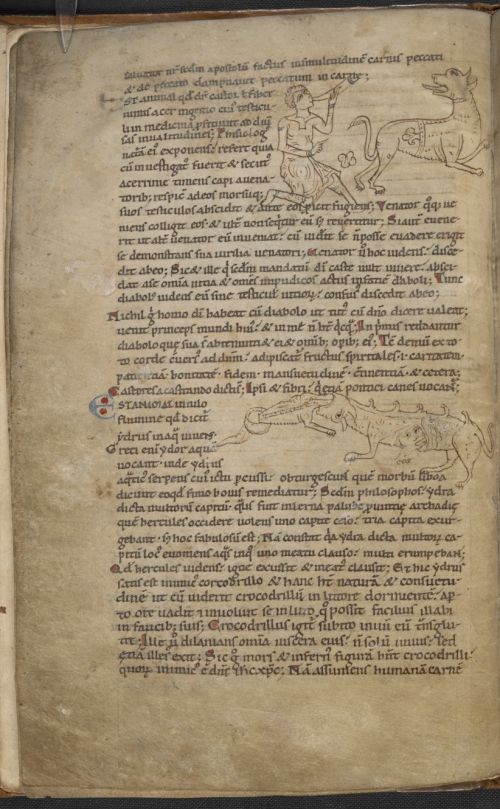 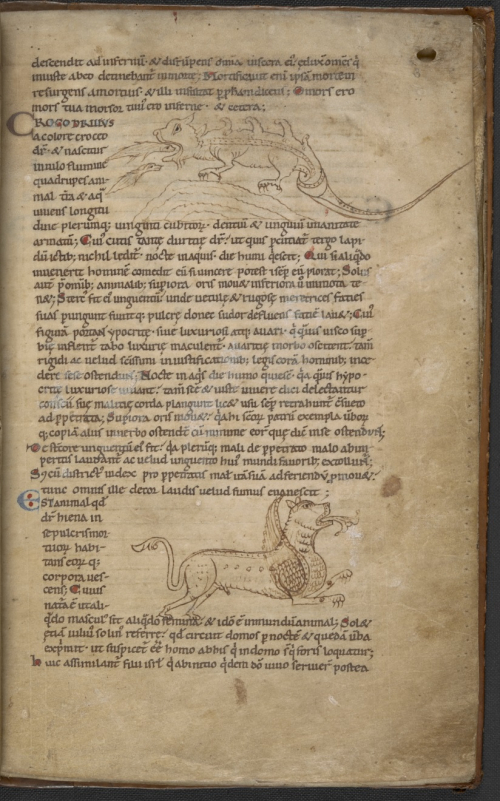 A beaver with a man blowing a horn, a crocodile swallowing a hydrus, a crocodile eating fish, and a winged hyena (England, 1st quarter of the 13th century): Stowe MS 1067, ff. 2v–3r

Guillaume le Clerc, a Norman cleric and early compiler of the bestiary, described crocodiles as being shaped ‘somewhat like an ox’. The artist of one bestiary seems to have followed this trend, as their crocodile has long legs and looks more like a horse. 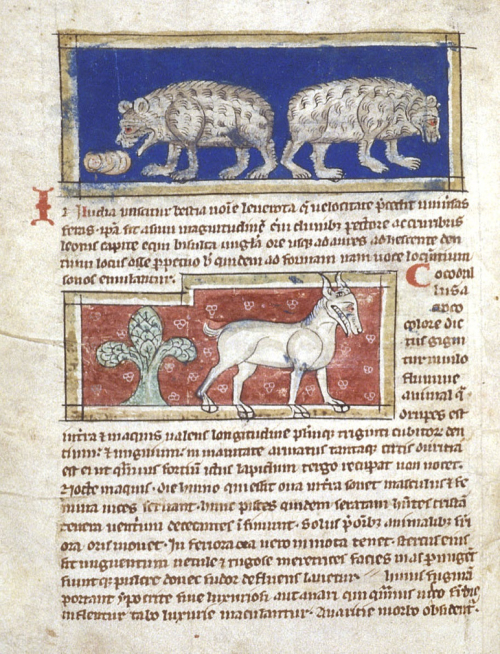 Later in the same volume, a different artist drew a more plausible shape, although this crocodile's ears are rather dog-like. 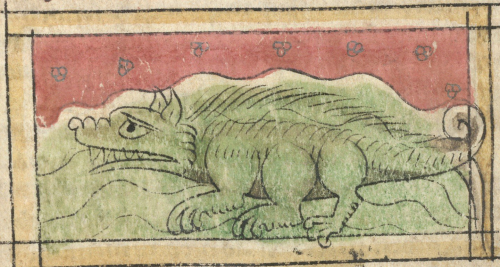 All the early writers who described crocodiles, from Pliny to Isidore to Mandeville, were agreed that they are ferocious beasts. Some alluded to their taste for humans, while Mandeville and Bartholomaeus Anglicus mentioned the tears that they cried before swallowing their hapless prey. In this image, a crocodile (labelled 'serpens') is shown swallowing a man who is stabbing him, while a hydra emerges from a hole it has bitten in his side. 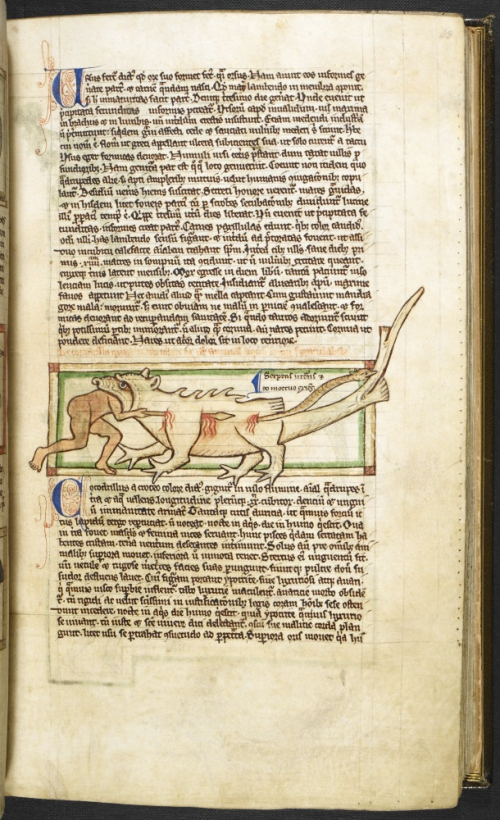 For pure invention, the prize goes to these two artists, whose creatures resemble dinosaurs or prehistoric insects. 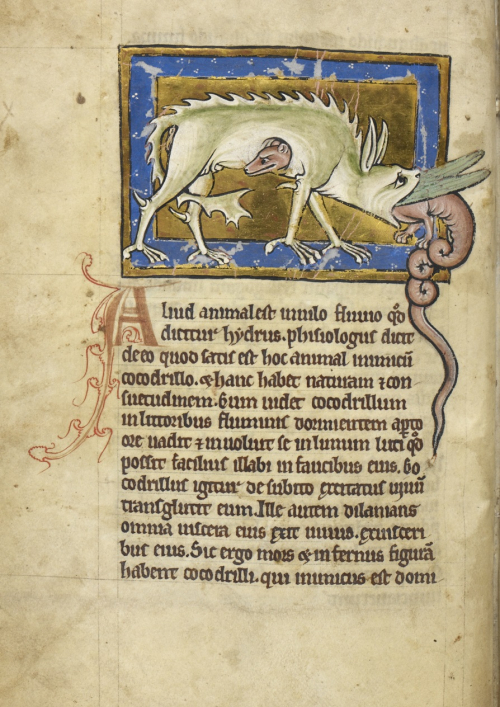 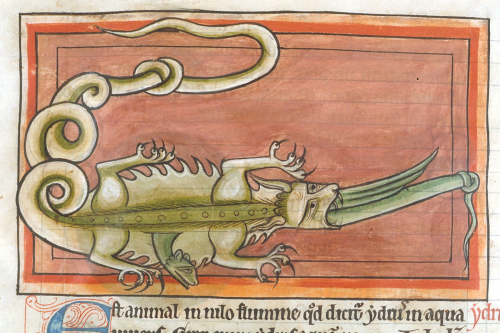 A crocodile with a knotted tail (England, early 13th century): Harley MS 4751, f. 62v. This manuscript was digitised as part of The Polonsky Foundation England and France Project.

Bestiaries are not the only manuscripts to contain images of crocodiles. Here are two in the margins of Psalters, one made in Constantinople and the other in England. 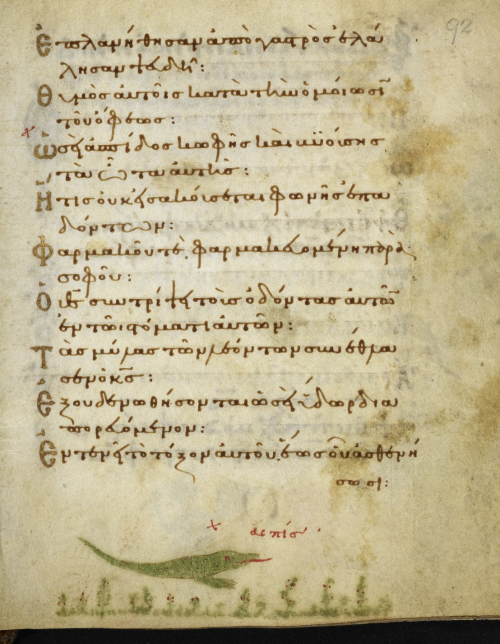 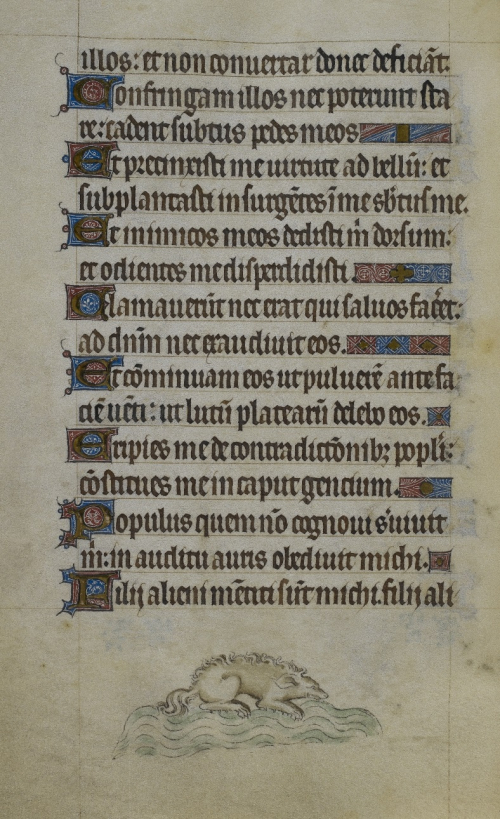 So why blog about crocodiles? They are certainly not cuddly creatures like the dogs, cats, elephants, hedgehogs, beavers or owls that we've blogged about before. The idea came to me while I was writing another blogpost on the works of Homer. What do crocodiles have to do with Homer, one might ask? The missing link is the remarkable survival of two Egyptian papyri containing his writings, known as the ‘Harris Homer’, one in roll-form and one in book-form (Papyrus 107 and Papyrus 126).

The papyrus roll was found in ‘the crocodile pit’ at Ma’abdey, near Monfalat, in Egypt, on 9 December 1849, before being acquired by Mr A. C. Harris. This story has been investigated by Brent Nongbri in his article ‘The Crocodile pit of Maabdeh, Florence Nightingale, and the British Museum's acquisition of the Harris Homers’, Bulletin of the American Society of Papyrologists, 54 (2017), 207–17. Apparently the pit was a cave on the banks of the Nile containing thousands of crocodile and human mummies, much visited by 19th-century travellers who wished to experience the thrill of being attacked by bats and encountering the spirits of dead crocodiles.