Ink in the clink

While he was imprisoned in the Tower of London from 1603 to 1616, the famous courtier, explorer and author, Sir Walter Raleigh (1554–1618), turned to writing. One manuscript is an impressive witness to the years he spent in prison. Add MS 57555 contains Raleigh’s own handwritten notes, a shelf-list of his books held in the Tower, and an autograph poem addressed to Queen Elizabeth I.

Writing was a familiar activity in the Tower of London. The building contains a substantial collection of early modern graffiti, as prisoners inscribed their names, initials, symbols, monograms or verses onto the walls. A number of early modern prisoners’ poems were circulated with accounts of how they were originally written upon windows with pins or diamonds. Elizabeth I herself, as a prisoner in Woodstock Palace, was said to have written the following verse with a diamond upon her window: ‘Much suspected by me / Nothing proved can be. Quoth Elizabeth, Prisoner’. Lady Jane Grey is also meant to have written verses upon her window in the Tower of London during her imprisonment, using a pin. 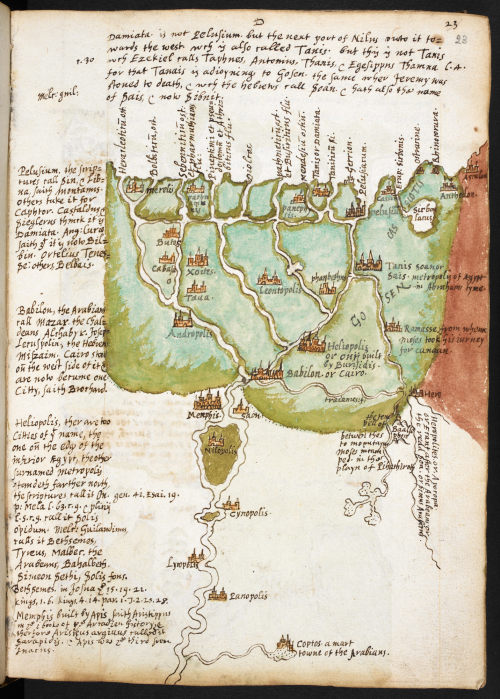 Walter Raleigh's map of Egypt, showing the lands around 'Babilon or Cairo', 'Heliopolis' and 'Memphis', from his commonplace book: Add MS 57555, f. 23r

Raleigh’s written remains from the Tower can be found in this manuscript. It is partly a ‘commonplace book’: a book in which notes and memoranda could be recorded for easy reference, under subject-headings which had been written in advance. Raleigh used his notebook to compile historical information on the Middle East and North Africa, arranged alphabetically by ancient place-name. This research was most likely undertaken in preparation for his capacious prose work The History of the World (published in 1614). The manuscript also contains Raleigh’s draft maps of the coast and hinterland of North Africa and Palestine, some of which closely mirror the engravings by William Hole which accompany the printed History of the World. 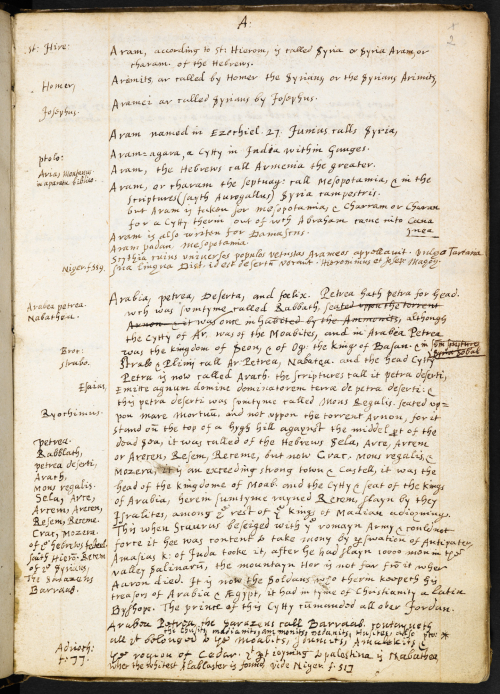 Raleigh similarly used his notebook as an apparatus when it came to recording information about the books he owned in the Tower. In his room within the Bloody Tower, Raleigh had approximately 515 books, as well as mathematical instruments and a 'stilhows' or laboratory. In his notebook, Raleigh and two servants or amanuenses compiled a list of these books, and their locations on the shelves, according to their subject and size. The manuscript would have helped Raleigh physically navigate the reading material he had amassed upon his shelves.

This manuscript shows how Raleigh was surrounded by the written word during his time in the Tower. His notebook was an organisational tool for writing; whether that was organising research and notes for his own writing, or the contents and location of volumes in his library. Appropriately, the final item in the volume, an older poem addressed to Elizabeth I, ends with Raleigh imagining an ideal scene of writing, but one which has sadly been diminished:

If love could find a quill

drawn from an angells winge

or did the muses singe

that prety wantons will,

to pleas all other sence 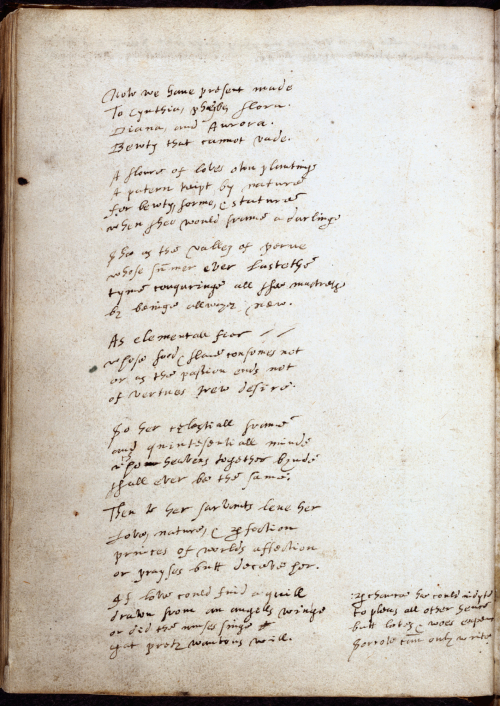 Raleigh was released from the Tower in 1618, to make a final journey to Guiana in search of El Dorado, a city of gold. The voyage was unsuccessful and, upon his return, King James I ordered his execution for violating peace treaties with the Spanish. Sir Walter Raleigh was executed on the morning of 29 October 1618, at Westminster.

You can see an extraordinary range of similar items relating to the history of writing in the British Library's current major exhibition, Writing: Making Your Mark , which is on until 27 August 2019.