The British Library's new exhibition, Writing: Making Your Mark, celebrates all forms of writing over the last 5,000 years. It focuses not only on the very outcome of the act of writing, the written document itself, but more broadly on the various tools used to create the written word. 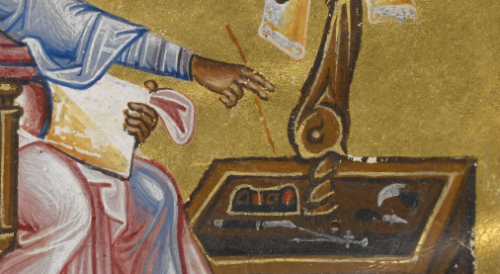 Besides the various types of pens, quills and pencils, one of the earliest and most popular writing tools, used for more than five millennia, is the stylus. The name comes from the Latin word stilus, meaning 'a stake'. It refers to a small, pointed instrument made of metal, wood or bone, used by the Romans for writing upon wax tablets. 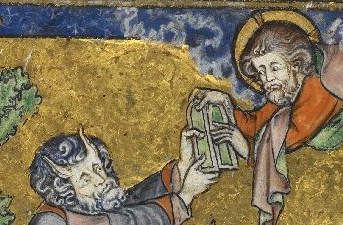 The term 'tablet' can cover a variety of writing materials. One perhaps thinks of a stone with writing carved onto it, such as the two tablets of the Ten Commandments said to have been carved by God. However, it was not only iconic pieces of inscribed stones that were employed in this way in Antiquity, since tablets made of wood or wax were more commonly in use. 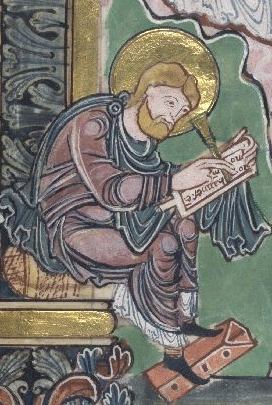 The earliest surviving wooden writing tablet was recovered from a 3,500-year-old shipwreck near Kaş, in modern Turkey, in 1986. They were not in common use until about 715BC with the Neo-Assyrians in Mesopotamia. In the 7th century BC, the Greeks set up a community in Egypt from where the next oldest tablet was found, although it does not appear that the Egyptians themselves actually used such tablets. They became more common in the Roman Empire, surviving in considerable quantities from Egypt to Britain. Wooden tablets would have been written on with pen and ink, similar to a sheet of papyrus or a page of parchment.

Documents on wooden tablets were usually ephemeral in nature. Pieces written for or at school are the most common survivors, such as teachers' notebooks, children's homework or private letters (such as the famous Vindolanda tablets excavated from Hadrian’s Wall). 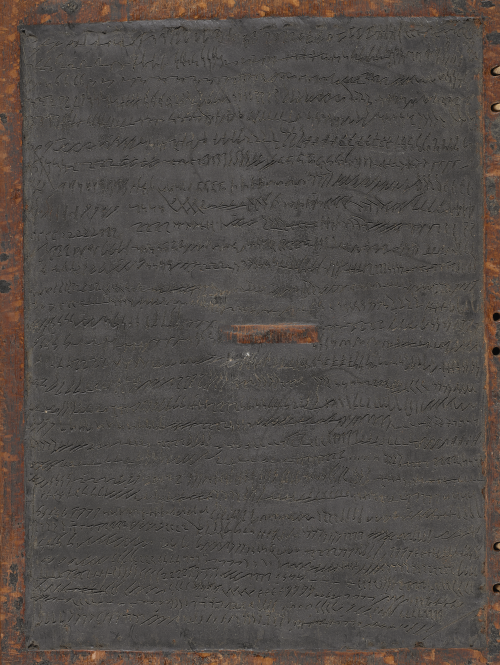 The earliest documented use of wax tablets dates from Italy in the 7th century BC. The Etruscans used them not only for writing but also as amulets. Their wider use started with the Greeks, who were great beekeepers and had plenty of beeswax at their disposal. For a short period, there was a ban on the export of papyrus from Egypt, meaning that wax tablets were in regular use. Styluses would have been employed to scratch letters in the smooth wax.

Most tablets were made from the sandarac tree (Tetraclinis articulata, a member of the cypress family) or from boxwood. A flat, rectangular block would have been hollowed out and filled with wax, often black or natural or with a sooty coating, so that the lighter colour showed through when written on. 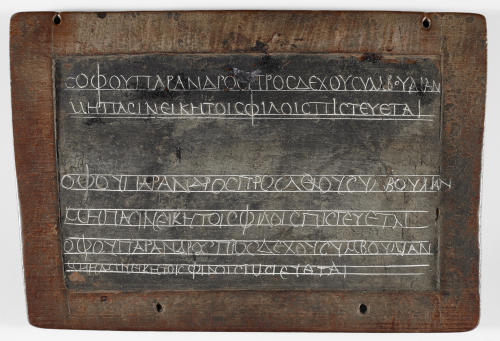 Wax tablets were used in similar contexts as their wooden counterparts. Cheap and easy to re-use, wax tablets were ideal for teaching children to write. The item shown here, approximately the size of a modern iPad, is a homework-book used about 1,800 years ago at a Greek school in Egypt. The teacher wrote out two lines of a maxim on the top of the tablet, which were to be copied out by the child at home. The pupil tried their best but made several mistakes: the first letter in the first line ('C') was missed out twice, the last letter of the line ran over the margin, and the last line became compressed.

Thanks to a generous loan from the Museum of Writing Research Collection of the University of London Senate House, Writing: Making Your Mark displays the tools children may have used to do their homework 2,000 years ago. The sharp end of an iron stylus was used to write, while the blunt end was heated over a flame and used to erase mistakes or smooth the wax for reuse. The styluses were often stored with the tablets themselves: the last part of a set of tablets often contained a little groove in which to store the stylus. 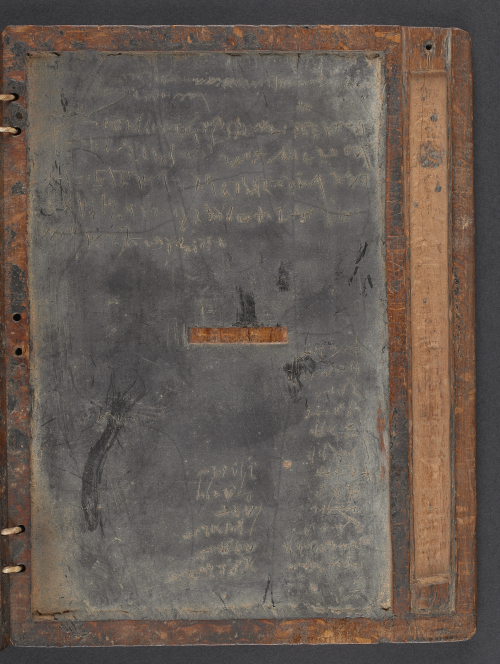 How would words be erased from a wax tablet? Alan Cole, the consultant of the Museum of Writing Research Collection, has experimented as follows: 'I used original, Roman metal styli and an original Roman lamp. I held the stylus in my thumb and forefinger about a centimetre and a quarter from the flat end and held it in the tip of the flame until I began to feel the warmth.  It was then at the optimum temperature to erase a few characters. This worked for iron and bronze. Not advisable for silver, gold, wood or bone! To erase a whole tablet of characters, hold the tablet upside-down, just above the tip of the flame, and gently move the wax over it until the surface is about at melting point and then remove it from the flame and with the tablet wax side up either move the tablet in a slight see-saw movement or gently go over the surface with a warmed stylus. Personally, I use a blow-torch!'

On 20 May the British Library is hosting a one-day conference featuring the latest research on our tablets and the different kinds of things people wrote on wood, wax and metal, from homework to charms and letters.

Writing: Making Your Mark is on at the British Library until 27 August.