Mehmed the Conqueror, scourge of the world

The fall of Constantinople to the Ottoman Empire in 1453 brought Turkish politics closer to western Europe. The Italian merchant cities already had commercial ties with the Ottomans across the Mediterranean, but after the collapse of the Byzantine Empire, western Europeans became increasingly more interested in — and often worried by — their new eastern neighbours.

It was not only scholars, manuscripts and ideas that flowed from East to West. In the wake of the Ottoman conquest of the Byzantine Empire, the reputation of Mehmed II (1432–1481), commonly known as Mehmed the Conqueror, spread throughout Western Europe. Reports travelled of his military genius, political astuteness and cultural refinement. 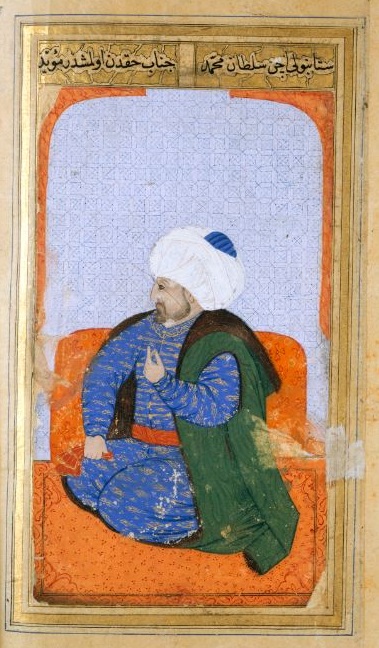 A portrait of Mehmed II in Kiyafet ül-insaniye, a description of the first twelve Ottoman sultans: Add MS 7880, f. 45v

A celebrity of the 15th century, Mehmed mesmerised his contemporaries, particularly Italian humanists and artists. Gentile Bellini was even invited to paint Mehmed’s portrait. The humanists’ fascination with the Ottoman sultan may be gauged through an epitaph for Mehmed, which started circulating soon after the sultan’s death in 1481. Previously attributed to Leonardo Griffi (1437–1485), friend of the renowned Italian humanist Francesco Filelfo (1398–1481), but now considered to have been composed anonymously, the epitaph extols Mehmed’s virtues and conquests.

An early copy of the epitaph known as ‘the epigram of the great Turk’ (epigrama magni teurci [sic]) survives in Harley MS 2455, a late-15th century manuscript written probably in Milan. The volume also contains works by Terence and Ovid and a copy of the 14th-century epitaph for Giovanni Visconti, archbishop of Milan (d. 1354), composed by Gabrio Zamorei. As Zamorei’s epitaph occurs in many other manuscripts produced in Milan, it is likely Harley 2455 may have also been written there. 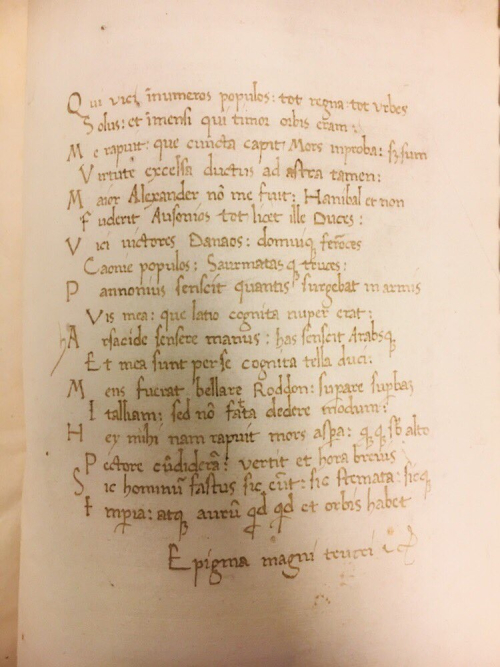 This copy of the epitaph for Mehmed II is written in a clear humanistic script: Harley MS 2455, f. 90r

The epitaph for Mehmed brings together the humanists’ fascination for the Ottoman sultan and their enthusiasm for classical antiquity. In flowing elegiac couplets, the sultan is described as the ‘dread of the world’ (timor orbis), having conquered countless peoples, kingdoms and cities. Mehmed’s conquest of Constantinople was followed by that of other major Greek cities as well as that of the Genovese colony in Crimea. He is not an equal to Alexander the Great or Hannibal, the text explains, but stands well above them.

In good humanistic tradition, the poet censures ‘proud Italy’ (superba Italia), whom the sultan would have conquered had the fates not conspired against him. Mehmed may have the whole world, but in the face of death, the poet concludes, human pride, magnificence, empires and gold perish without a trace. 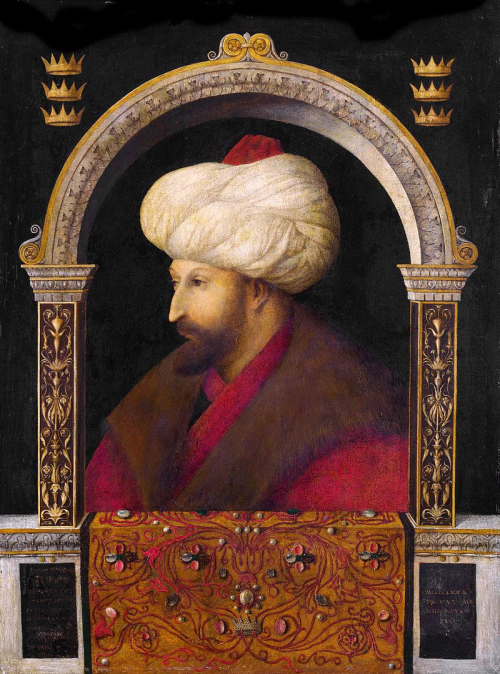 Portrait of Mehmed II by Gentile Bellini, in the collections of the National Gallery, London

The British Library has recently started to upgrade the catalogue records of the Harley manuscripts, including Harley MS 2455. You can read an introduction to this project here.