Whale of a time

The Polonsky Foundation England and France Project has created a new animation telling the story of the Whale, the terror of the seas, based on an account in an illustrated bestiary (Harley MS 4751).

The bestiary was a type of manuscript that contained descriptions of over a hundred animals, detailing their characteristics and habits, as well as associated allegorical moral lessons. To explore more stories from the bestiary, check out this brilliant discussion on our website: ‘Beastly tales from the medieval bestiary’.

Illustrations of the whale in early medieval bestiaries vary greatly, but they often take the form of a type of enormous fish, with fins, a tail and a huge belly. According to one description in a manuscript made during the early 13th century (Harley MS 4751), the whale’s body is so large that unwary sailors mistake it for land and anchor their ships on its back. When they light fires, the creature feels the heat of the flames and dives beneath the waves, dragging the sailors to their deaths. 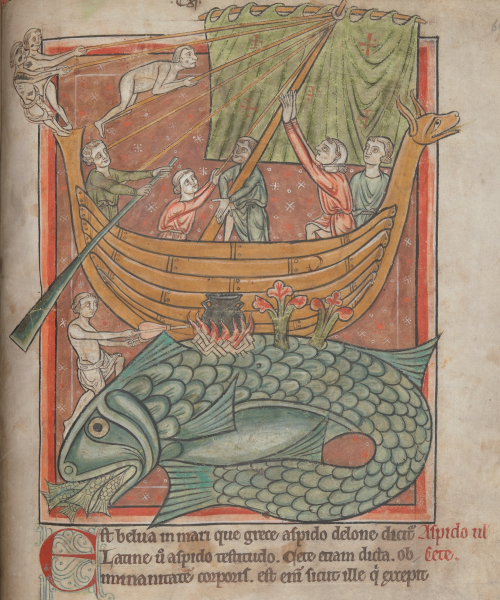 The whale is so huge that sailors could mistake it for an island, in a bestiary with additions from Gerald of Wales's Topographia Hibernica (Salisbury, late 12th–early 13th century): Harley MS 4751, f. 69r 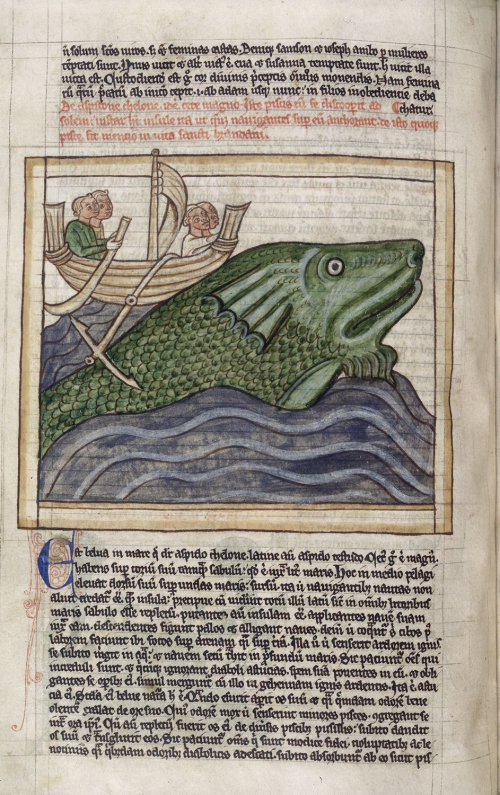 Sailors mistake a whale for an island and anchor their ship on its back, in Peraldus’ Theological Miscellany (England, 3rd quarter of the 13th century): Harley MS 3244, f. 60v

To feed itself, the whale will open its mouth and let out a sweet scent, luring schools of small fish inside. Then it quickly snaps its jaws shut, so that the fish cannot escape, and swallows them whole. Because of these behaviours, the commentary in medieval bestiaries associated the whale with the Devil, who similarly deceives and lures sinners, dragging them down with him to the depths of Hell. 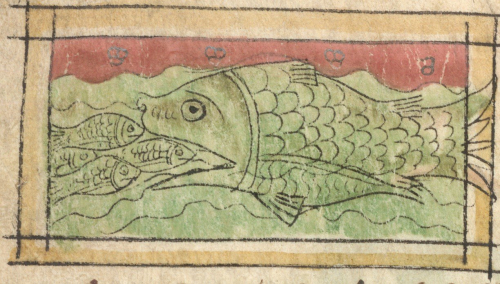 A hungry whale opens its mouth and lets out a sweet scent to lure small fish, in a bestiary (England, 2nd or 3rd quarter of the 13th century): Sloane MS 3544, f. 42v

We would love you to explore more stories of birds and beasts from the bestiary. As well as Beastly tales from the medieval bestiary, check out this animation of the life of the crane, also created for The Polonsky Foundation England and France Project. The Medieval England and France, 700–1200 website contains a wealth of other articles relating to the manuscript culture of this period, alongside collection items from the British Library and Bibliothèque nationale de France.