What does a wheelbarrow have to do with Aristotle?

Visitors to the British Library exhibition, Writing: Making Your Mark, will no doubt stop to admire a copy of Aristotle’s works on natural sciences, probably made for a medieval student at Oxford University. The careful layout and the perfectly formed gothic handwriting in different styles is impressive, but what will they make of the images on the page?

The page on display shows a decorated letter containing, logically enough, a seated philosopher examining a book and pointing to the heavens. But in the margin there is a man pushing a naked figure in a wheelbarrow, similar to the figures sometimes used to illustrate the fool of Psalm 52, “The fool (insipiens) said in his heart: There is no God” (e.g. in the Rutland Psalter, Add MS 62925). What does this scene have to do with Aristotle? 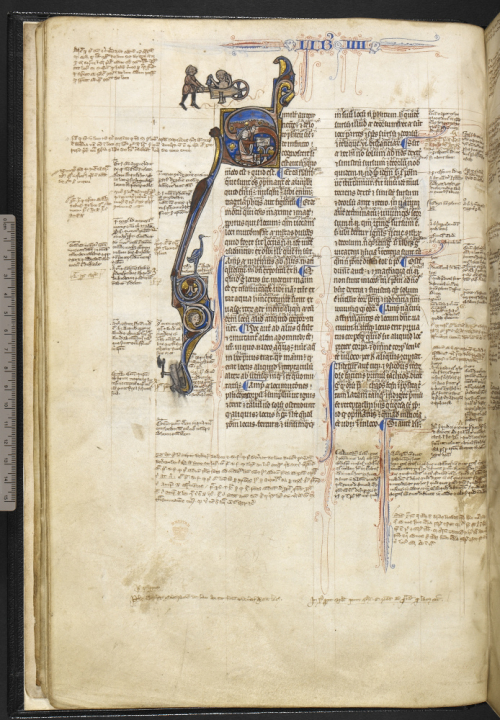 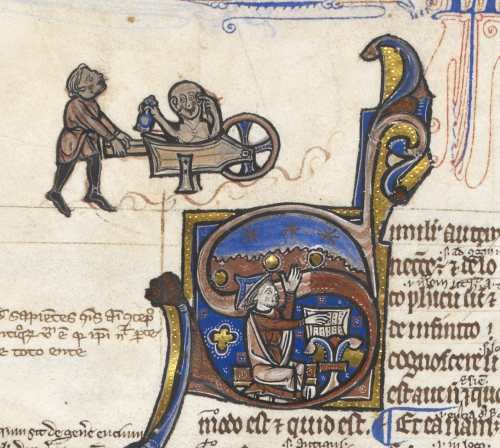 A philosopher and a man pushing a fool in a wheelbarrow, Aristotle’s Libri naturales, England (Oxford?), 3rd quarter of the 13th century: Harley MS 3487, f. 22v

In the 12th and 13th centuries, the works of the Greek philosopher Aristotle were translated into Latin and completely transformed ideas on philosophy and natural science in Western Europe. A number of manuscripts containing works by Aristotle or attributed to him have been digitised in The Polonsky Foundation England and France Project: Manuscripts from the British Library and the Bibliothèque nationale de France, 700-1200 and are referenced in this article https://www.bl.uk/medieval-english-french-manuscripts/articles/medieval-science-and-mathematics.

Despite Church disapproval of the study of ‘pagan’ writings that contradicted its teachings, and the subsequent banning of Aristotle’s works in Paris, they soon became key texts in medieval universities. This book contains a collection of the required reading on the Oxford curriculum, complete with glosses and commentaries in the margins and between the lines of text to provide detailed explanations. But it is the decoration that makes this manuscript unique: it is exceptional for a volume of Aristotle’s works to be so elaborately illustrated at this time. There are 29 historiated initials, one at the beginning of each book or chapter, each representing the text that is to follow. Because there was no earlier tradition of illustrating Aristotle’s texts, the artists had to be innovative. Sometimes they adapted subjects from other genres, and sometimes they invented new ones. 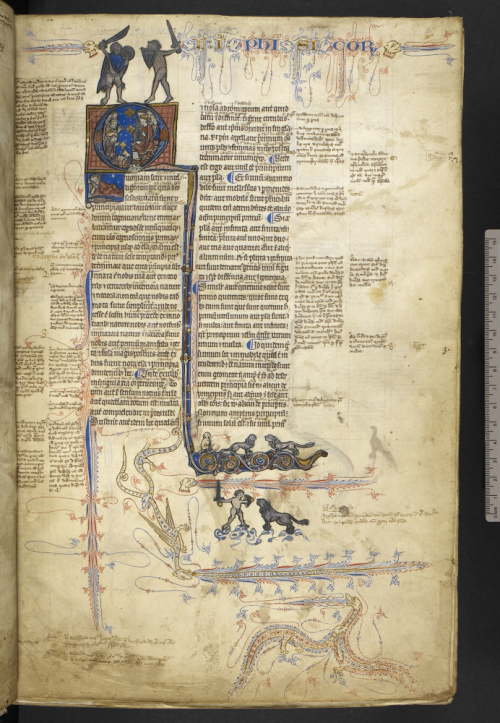 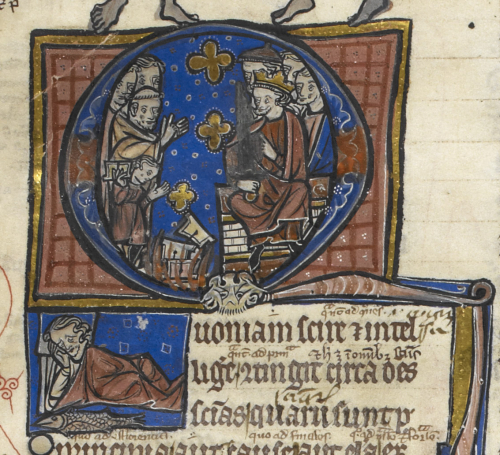 Books being burned before a king, a friar and others, Aristotle’s Libri naturales: Harley MS 3487, f. 4r

Perhaps the most intriguing of all the initials is the first in the manuscript, on the opening page of Physics. The decorated letter on this page depicts a small child throwing books onto a fire before a king, a friar and other figures.  Scholars have suggested that this scene represents the burning of books of Aristotle’s works in Paris in 1210, while the friar represents the role played by the Franciscans and other preaching orders in teaching Aristotle. The most well-known image in this manuscript is one of the earliest depictions of a windmill. This is found at the beginning of the book Meteorologica, which includes early accounts of weather phenomena. Here a man is adjusting the direction of a windmill to catch the wind. Beneath, a bird holds a twig in its beak, perhaps referring to the way that birds use the wind in flight.

Now, let’s return to the illustration of a philosopher star-gazing and a fool riding in a wheelbarrow on the page on display in the exhibition. It appears at the beginning of book IV of Physics, which studies the Heavens. A possible interpretation for this image is that it juxtaposes knowledge and foolishness. The seated philosopher inside the letter is looking up at the stars, but above him the fool could be a reminder that too much knowledge leads to madness. But as with many of the marginal images in the manuscript, there are no definite explanations. 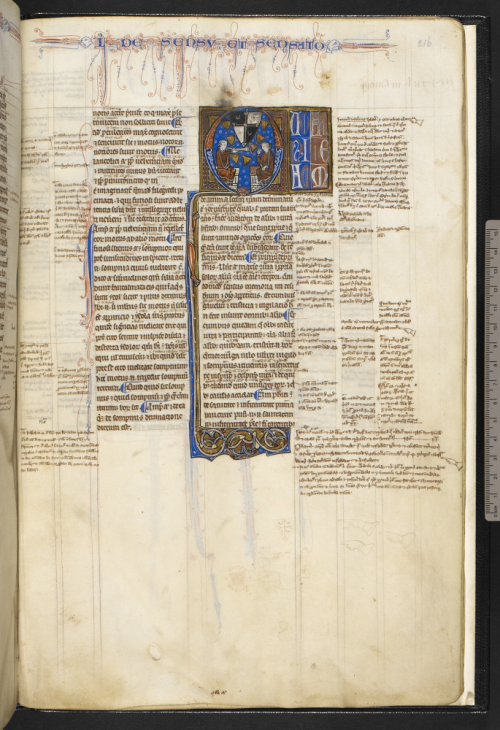 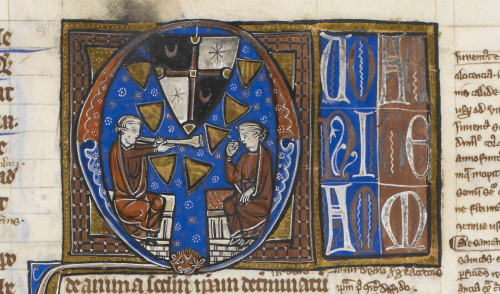 A coat of arms, possibly of a son of Geoffrey Beauchamp of Bedford, with one man blowing a horn and another eating, Aristotle’s Libri naturales: Harley MS 3487, f. 216r

This manuscript is an example of the skills that came together in 13th-century Oxford to produce a work that is both educational and entertaining. The thoughtful explanations and interpretations of the text, the remarkable planning and layout, and the innovative decoration and illustration, make it easy and delightful to use. The owner must have been one lucky student, and indeed a likely candidate would be the son of Geoffrey Beauchamp of Bedford (fl. c. 1256), member of one of the richest and most powerful families in England at the time.