We are thrilled to announce that Claire Breay, Head of Ancient, Medieval and Early Modern Manuscripts at the British Library, has received this year's Longman-History Today Trustees' Award. This honour is in recognition of Claire's efforts to promote history in the public sphere, culminating most recently in the Library's once-in-a-generation (or should that be once-in-a-millennium?!) Anglo-Saxons Kingdoms exhibition. Claire received her award from Paul Lay, editor of History Today, pictured with her below, and in characteristic style she paid tribute to her colleagues across the British Library, together with Professor Simon Keynes and Professor Joanna Story, who advised on the exhibition, as well as her husband (for remembering to feed her family while she was otherwise occupied). 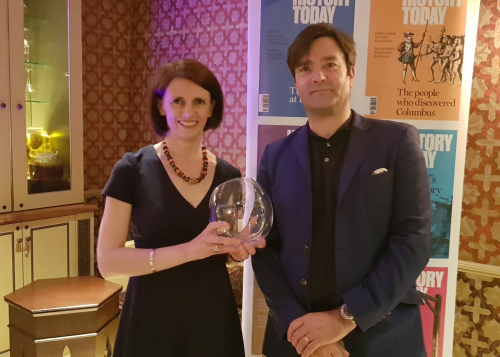 Speaking on behalf of the judges, Paul Lay remarked that Claire deserved the Trustees' Award for a string of major achievements, which include curating the Library's exhibition Magna Carta: Law, Liberty, Legacy in 2015, and for co-editing (with Jo Story) the catalogue which accompanied Anglo-Saxon Kingdoms. Many of our readers will be aware that this most recent exhibition brought together for the first time a significant number of the most precious early English treasures, including the four Old English poetic codices, items from Sutton Hoo and the Staffordshire Hoard, Domesday Book and (one of our particular favourites) Spong Man. Also on display was the mightily impressive (and phenomenally heavy) Codex Amiatinus, which had been returned temporarily to these shores for the first time in 1,300 years. Securing agreement to borrow these manuscripts and artefacts was no mean feat. As Claire pointed out in her acceptance speech, this enabled us to tell the story of a critical period of early medieval history alongside many of the Library's own Anglo-Saxon manuscripts, a remarkable number of which belong to the Cotton collection. 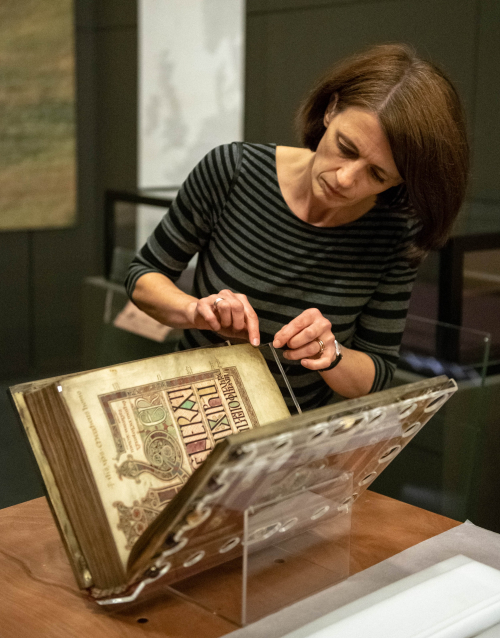 Claire Breay with the Lindisfarne Gospels (Cotton MS Nero D IV), prior to it being installed in the exhibition

We are delighted that Claire has been honoured in this way, and hope that you join us in congratulating her.

Posted by Ancient, Medieval, and Early Modern Manuscripts at 11:54 AM