Noah's Ark and the Anglo-Saxons

When our Anglo-Saxon Kingdoms exhibition ended recently, you might have been forgiven for thinking that little more remains to be discovered about this crucial period of early medieval history. It's highly unusual for unknown Anglo-Saxon manuscripts to come to light (although we did recently purchase a leaf formerly in private hands), while archaeological finds like the Staffordshire Hoard and the Winfarthing Pendant are still extreme rarities. We are delighted, therefore, to reveal that new technologies can enable us to uncover more about the Anglo-Saxon past.

Some of our readers may be familiar with the Old English Orosius, Add MS 47967 is the earliest surviving copy of a vernacular translation of the Historiarum adversus Paganos Libri Septem (Seven Books of History against the Pagans), a history of the world written by Paulus Orosius (d. after 418). This manuscript was probably copied in Winchester during the reign of King Alfred the Great (r. 871–899) and it may have been part of Alfred’s programme to translate important Latin works into Old English.

At the very end of this copy is a faded page of text (f. 87v), nearly impossible to read, although N. R. Ker attempted a transcription in his Catalogue of Manuscripts containing Anglo-Saxon (1957). Now, with the help of multi-spectral imaging technology employed by Dr Christina Duffy at the Library, we have been able to produce a clearer photograph of the page, unveiling more of the text it contains. 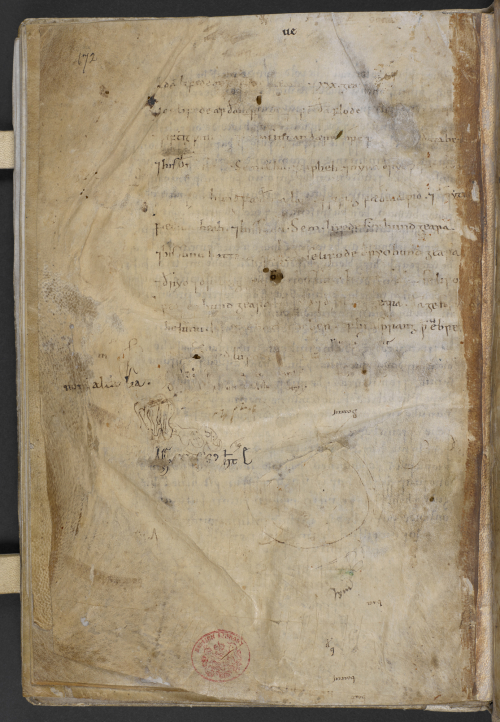 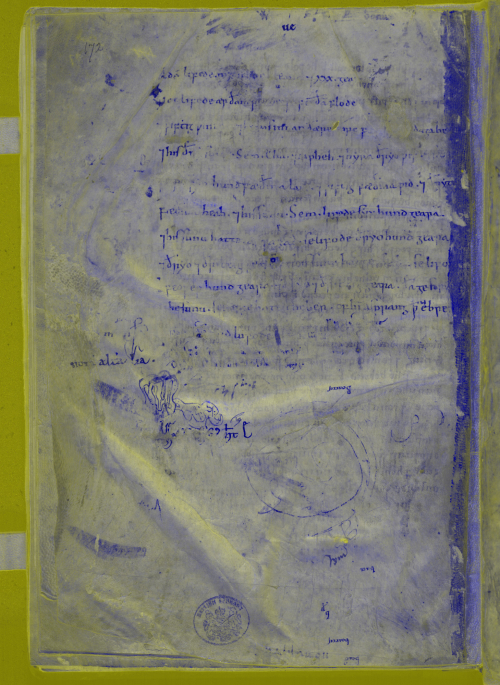 Before and after: the page of faded text at the end of the Old English Orosius, and after undergoing multispectral imaging: Add MS 47967, f. 87v

The Old English written here comprises a long note that provides details relating to the Bible, specifically the ages of Adam, Noah, his sons and their wives, and the dimensions of the Ark. The text reads as follows:

('Adam lived for 930 years. Noah lived 600 years before the Flood and 350 winters after it and he was in the Ark for 40 days, he and his three sons Shem, Ham and Japheth and their three wives. The Ark was 300 fathoms long, 50 fathoms wide, and 30 fathoms high. And his son Shem lived 630 years and his son Arfaxad lived 438 years. Then he begat a son called Heber. From him sprung forth the ‘Hebrew’ people.')

Comparable examples of this type of Old English text survive from other early manuscripts. At the end of a 12th-century copy of excerpts from the Disticha Catonis (Cotton MS Julius A II) is a series of notes written in the vernacular. 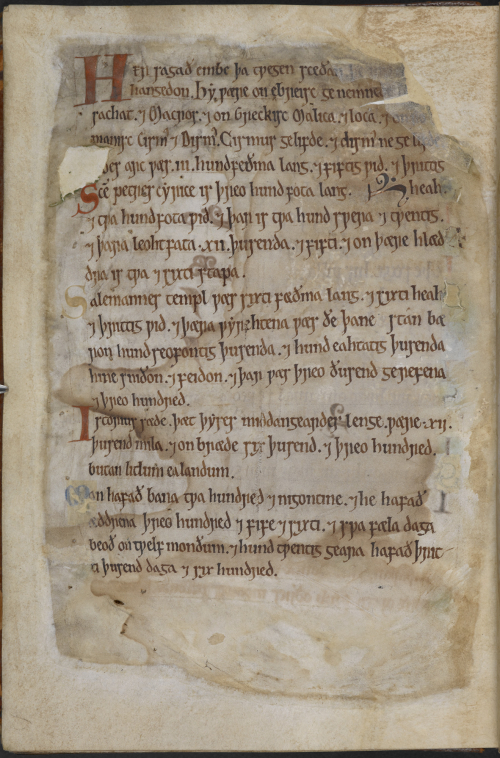 This text concerns a variety of subjects, including the names of the two thieves who were crucified next to Christ, the Temple of Solomon and the Church of St Peter in Rome, the dimensions of the world, and the number of bones in the human body. There is also a note that, like the faded text in the Old English Orosius, details the measurements of Noah’s Ark.

The story of Noah and his sons, and the building of the Ark, seems to have been popular in Anglo-Saxon England. Many of the surviving genealogical lists of Anglo-Saxon kings, for example, feature Noah prominently. The West Saxon Regnal List tell us that the line of the kings of Wessex, the dominant kingdom of Anglo-Saxon England from the late 9th century onwards, was descended from the Old Testament patriarch, through his fourth son Sceaf, said to have been born on the Ark itself. This work survives in a miscellany of astronomical, geographical and theological material, made in England during the second quarter of the 11th century. 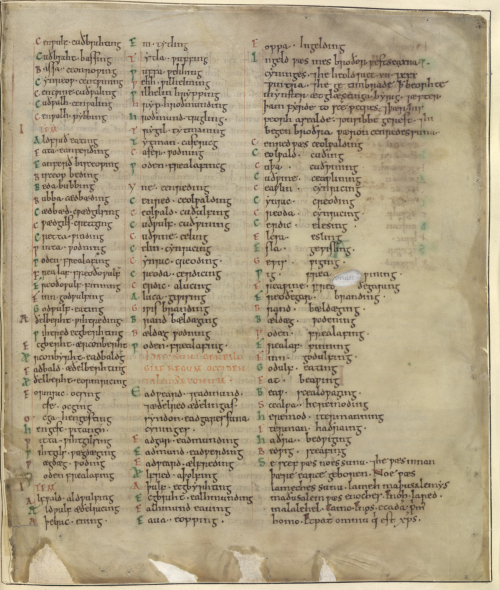 This copy of the West Saxon Regnal List states that the West Saxon kings were descended from Noah, through his fourth son Sceaf: Cotton MS Tiberius B V/1, f. 23r

In the same manuscript, a mappa mundi or ‘map of the world’ shows where the Ark is thought to have come to land. Here, its final resting place (marked with a drawing of the Ark itself) is identified as east of the Black Sea, close to the mountain ranges of Armenia. 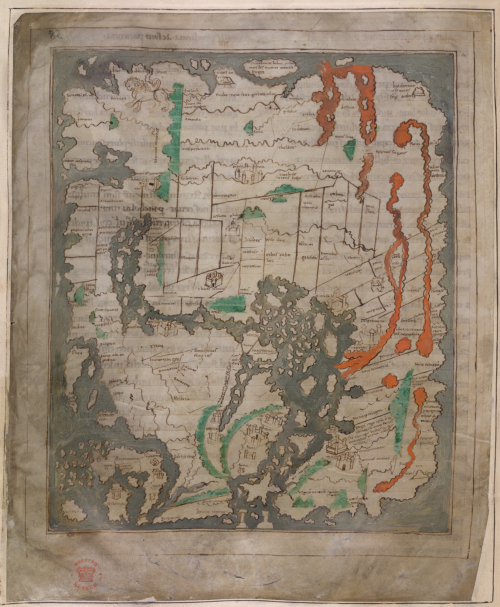 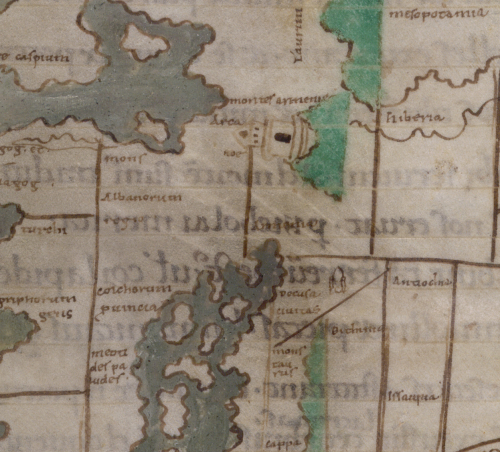 A map of the world from the Anglo-Saxon miscellany, showing the location of Noah’s Ark: Cotton MS Tiberius B V/1, f. 56v

Meanwhile, the artists of the Old English Hexateuch (Cotton MS Claudius B IV), written around the same time, were particularly inspired by Noah’s story and included several illustrations to accompany the account of Noah and his sons from the book of Genesis. These colourful framed images show the various phases of the Ark’s construction, the loading of the animals, the Ark at sea and the animals leaving the Ark with Noah and his family, once the waters had retreated. 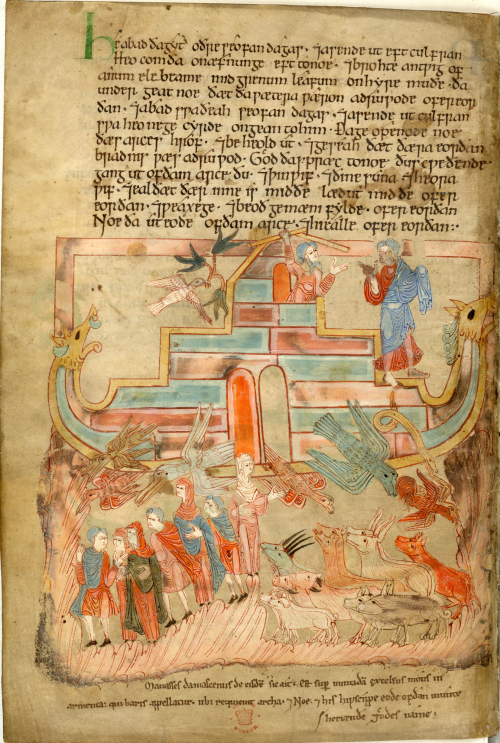 The animals leaving the Ark after the Flood has subsided, from the Old English Hexateuch: Cotton MS Claudius B IV, f. 15v

We are very excited to have been able to read the page in the Orosius manuscript for perhaps the first time in a thousand years. This is proof that there are many more discoveries to be made, which collectively will enable us to build up a more detailed picture of pre-Conquest history.