Toads and ermine (and other coats of arms)

Heraldry, or the study and design of armorial bearings, sometimes has a dusty reputation. This is quite undeserved: heraldic manuscripts can give us a fascinating insight into the way in which history and legend were interwoven in the medieval mind. In the mid-15th century, Richard Strangways of the Inner Temple wrote a treatise on the rules of heraldry that he exemplified with ‘imaginary arms’: coats of arms that were attributed to the protagonists of medieval legends and heroes of romances, and, retroactively, kings who had lived before the beginning of the age of heraldry in the 12th century. His treatise survives uniquely  in Harley MS 2259. 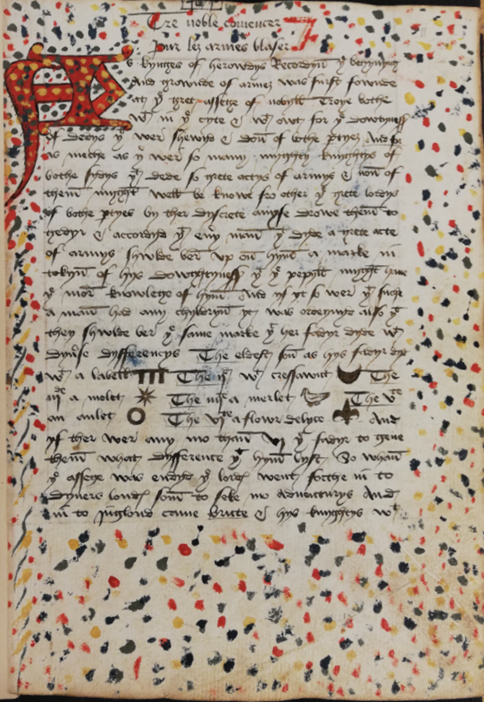 Strangways included in his treatise the attributed arms of Brutus of Troy, a legendary figure who — according to the anonymous 9th-century Historia Brittonum and Geoffrey of Monmouth’s Historia Regum Brittaniae — was a descendant of the Trojan hero Aeneas, and the founder and first king of Britain. He also painted the attributed arms of William the Conqueror. Like the near-contemporary Men of Arms in Harley MS 4205, Strangways claimed that the Duke of Normandy bore a shield with silver and blue bars when he conquered England in 1066. 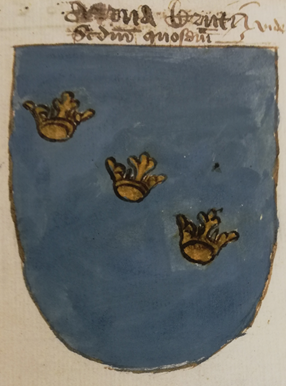 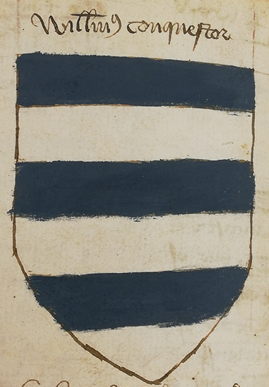 Describing the arms of the kings of France, Strangways followed a popular medieval legend: the pre-Christian kings of the Franks would have borne a pagan shield with three black toads (resembling the attributed arms of Satan), which the Franks continued to use until ‘Kyng Lowes’ [Louis the Pious?] prayed for a new charge and an angel gave him fleurs-de-lis to replace the toads. 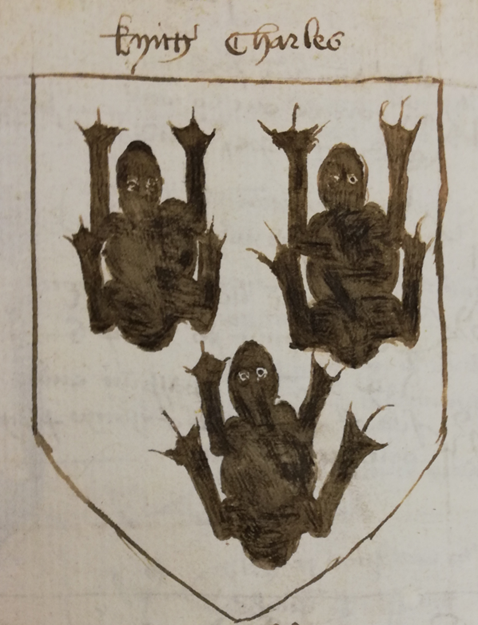 Arthurian literature was evidently another important source for Strangways. He formally described — or to put it in heraldic terms ‘blazons’ — the arms of the legendary King Arthur as a ‘gules three crowns in pale’. This means: a red shield with three golden crowns ordered vertically. 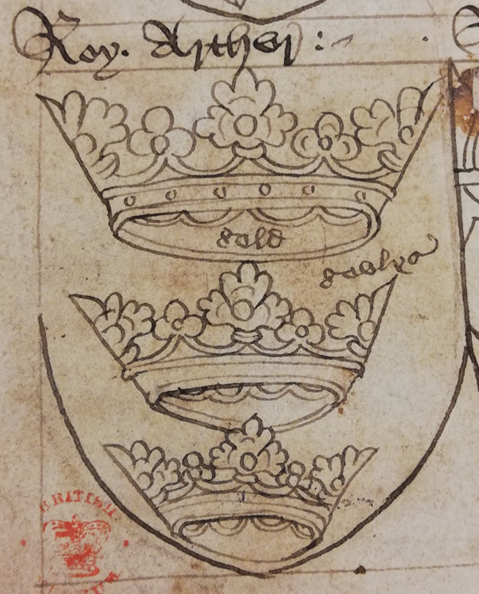 Strangways also showed the arms of Sir Geraint, who Welsh romances held to be one of Arthur’s most valiant knights, and those of Sir Gawain, one of the most renowned Knights of the Round Table. As the 14th-century Middle English romance of Sir Gawain and the Green Knight in Cotton MS Nero A X has it, Gawain bore a red shield with a five-pointed golden star. But Strangways gave him a green shield with a golden bar that is covered with an ‘ermine’ — a heraldic pattern based on the winter coat of the stoat. He stated that adding this ‘fur’ was necessary because Gawain was born in bastardy, a claim corroborated by medieval works such as De Ortu Waluuanii Nepotis Arturi (The Rise of Sir Gawain, Nephew of Arthur). To put it in Strangways’s own words, ‘the rule in heraldry is that if he is born of a noble lady in bastardy and bears her arms he shall bear them with such a fur’ (‘the law of armys ys yf he come of a gret lady in bastardy and ber her armys he shall ber hem with such a furcot’). 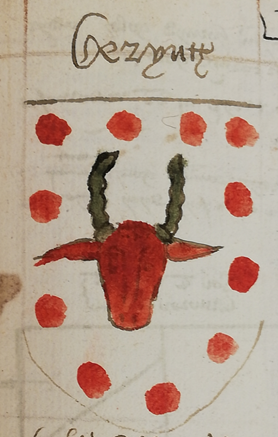 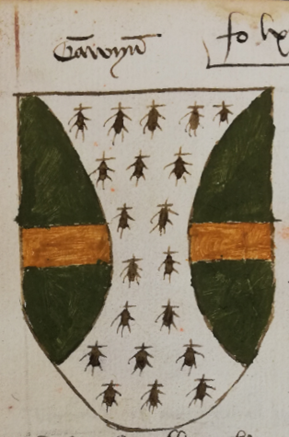 Harley MS 2259 also features the arms of Sir John Mandeville, the supposed author of a fictional travel memoir describing the wonders of the Holy Land, Africa and Asia. Mandeville’s Travels survives in hundreds of medieval manuscripts, but none of the illustrated versions (such as Harley MS 3954 and Add MS 24189) show Mandeville bearing arms. His shield was once displayed in the church of Guillemins near Liège (in modern-day Belgium), where Mandeville was supposedly buried, but the church was destroyed during the French Revolution. Strangways’s treatise includes one of only two extant illustrations of Mandeville's arms, and the only medieval one. 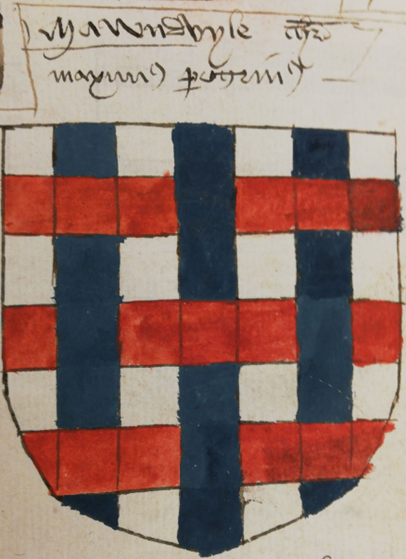 Strangways made special mention of the attributed arms of Prester John. According to popular legend, he was the founder and ruler of a Christian kingdom in the Far East. A letter purportedly written by him to the Byzantine Emperor, Manuel Komnenos, describes a kingdom with mythical animals, monstrous races and marvels such as a fountain of youth. The letter survives in hundreds of medieval manuscripts, the oldest dating back to the 12th century (for example, Harley MS 3099). Prester John’s arms are exceptional because they display the Crucifixion of Christ, imagery that was reserved for only a few eminent bishops and religious institutions.

Strangways emphasized his heraldic charge’s rarity by explaining the distinction between a crucifix and a cross, which was commonly used on coats of arms: ‘It is called a crucifix because God is nailed upon it, because if it is so that God isn’t nailed upon it in person, then it should just be called a cross’ (‘hyt ys callyd a crucyfix be cause god ys naylyd and crucyfyd up on yt. For yf  yt were so þat god were nat naylyd on yt in figure than yt shuld be callyd but a crosse’). 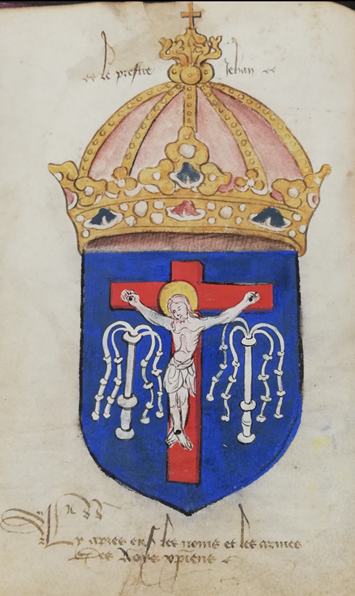 Strangways’s treatise is just one of several late medieval English heraldic works to feature attributed arms. These ‘imaginary arms’ reflect the importance placed on symbolism by the late medieval gentry and aristocracy, and a desire to associate themselves with important figures in medieval history and legend.

We are currently creating new online records for manuscripts in the Harley collection (one of the foundation collections of the British Library). You can read more about this project, which includes Harley MS 2259 (containing Strangways's treatise), in our blogpost Cataloguing the Harley manuscripts.