Unexpected encounters of the fragmentary kind

Over the last few months, we have been progressively adding new descriptions of the Harley manuscripts to our online catalogue. We have been surprised on a regular basis by the number of medieval fragments we have encountered in some of these volumes. Many of these leaves were not previously described in the printed Catalogue of Harleian Manuscripts (1808–1812), and they have gone largely unnoticed in modern times.

One of our most unexpected discoveries comes from the collections of John Bagford (1650–1716), a shoemaker, bookseller and library agent for Hans Sloane (1660–1753) and Robert Harley (1661–1724), founders of the Library’s Sloane and Harley collections. For example, tucked between Bagford’s notes on the history of printing is a parchment fragment that features a decorated monogram of the letters Te Igitur followed by the words clementissime pater, the opening words of the Canon of the Mass (‘Thee, therefore, most merciful Father’). 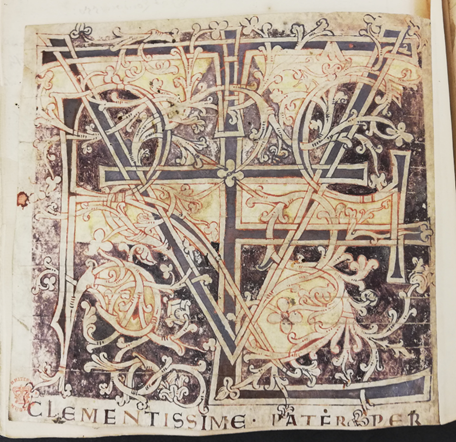 The opening of the Canon of the Mass and the Commemoration of the Living and the beginning of the Invocation of the Saints, from a fragmentary liturgical book (late 10th century or early 11th century): Harley MS 5910, ff. 79v, 79r

This fragment was cut from a manuscript used to celebrate Mass, probably a missal or sacramentary. Its script and the initial's design suggest that it was made  in the late 10th century or early 11th century, probably in France. The script and initial bear close similarities with a 10th-century manuscript made in Stavelot (modern-day Belgium). That manuscript (Stowe MS 3) was recently digitised as part of The Polonsky Foundation England and France Project. It contains a copy of the Four Gospels and a lectionary (a collection of readings of Scripture used for worship on a particular day). Here, pencil sketches for a large initial Q and F mark the beginning of the Gospel of St Luke. 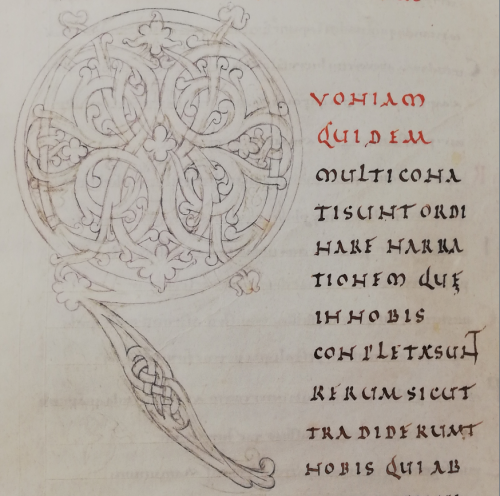 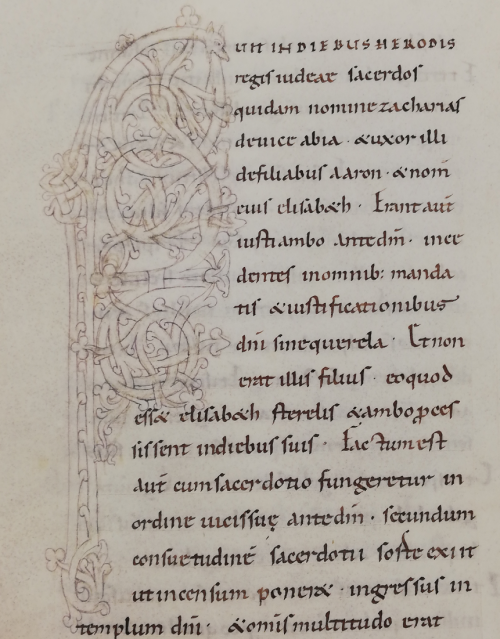 Sketches in pencil for a large initial Q and F marking the beginning of the Gospel of St Luke, from a 10th-century Gospel-book and Lectionary made in Stavelot: Stowe MS 3, ff. 111v–112r

During the Middle Ages, monasteries often recycled old liturgical manuscripts as binding materials. This may explain how a 15th-century manuscript of the Speculum Curatorum (Mirror for Curates) by the English Benedictine monk Ranulf Higden (d. 1364) came to include a flyleaf from a 12th-century Roman ritual, a manuscript containing the rites that were performed by priests. The fragment contains part of the rite of sprinkling a congregation with holy water (Asperges), followed by a blessing for pilgrims (‘Benedictio peregrinorum’). 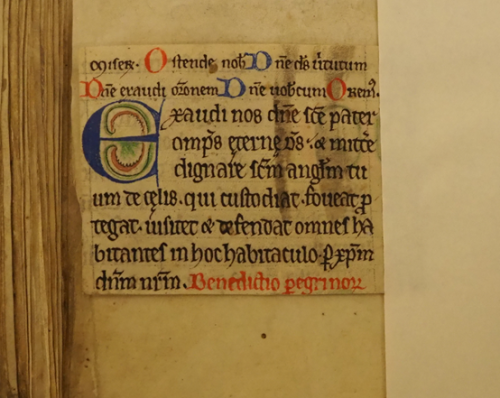 The Dissolution of the Monasteries between 1536 and 1541 caused many religious manuscripts to be dispersed among lay owners. The latter often exploited such manuscripts as sources of binding materials for other books, resulting in some unusual pairings of medieval and early modern leaves. For example, we have found two flyleaves with a 13th-century glossary of plant names in an early modern manuscript of texts concerning the Church of England. 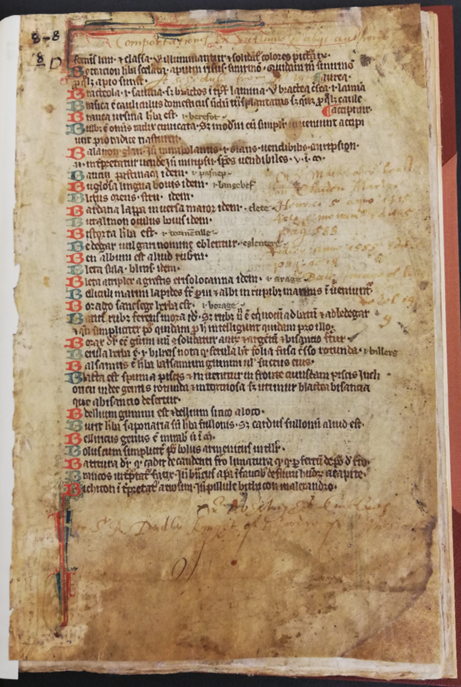 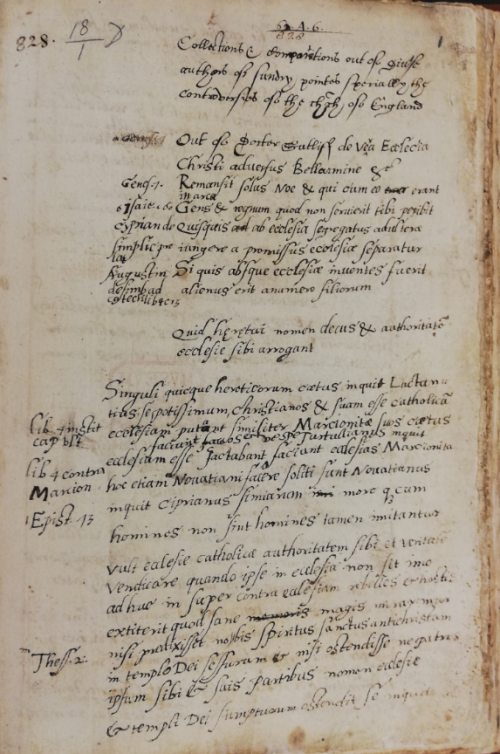 In cataloguing a manuscript (Harley MS 6547) containing the Tractatus de Libero Arbitrio (Treatise on Free Will), we encountered a parchment fold-out that was taken from a 13th-century glossed Bible. 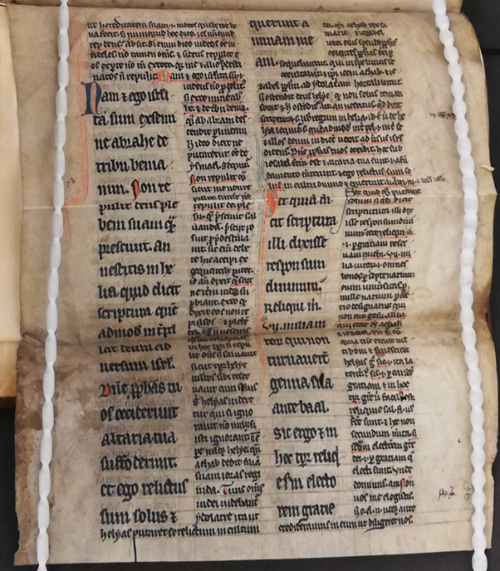 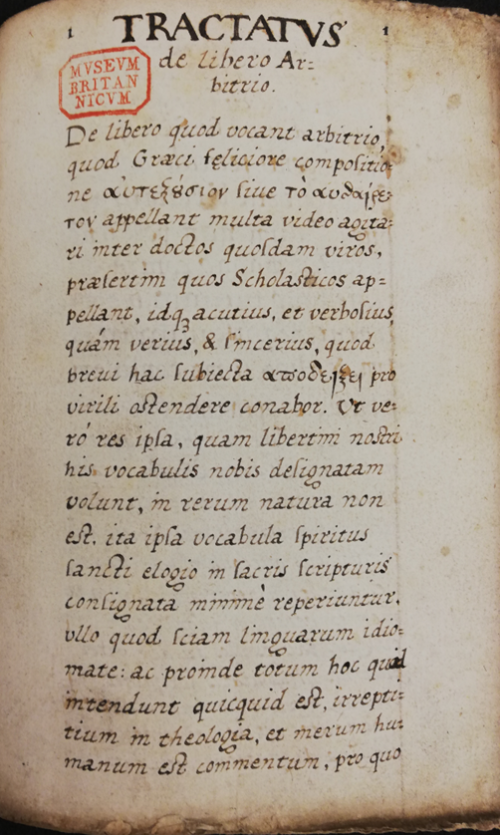 An unknown early modern English manuscript owner appears to have taken a leaf from a 13th-century lectionary to supply a flyleaf for a mid 16th-century survey of English counties (Harley MS 71). 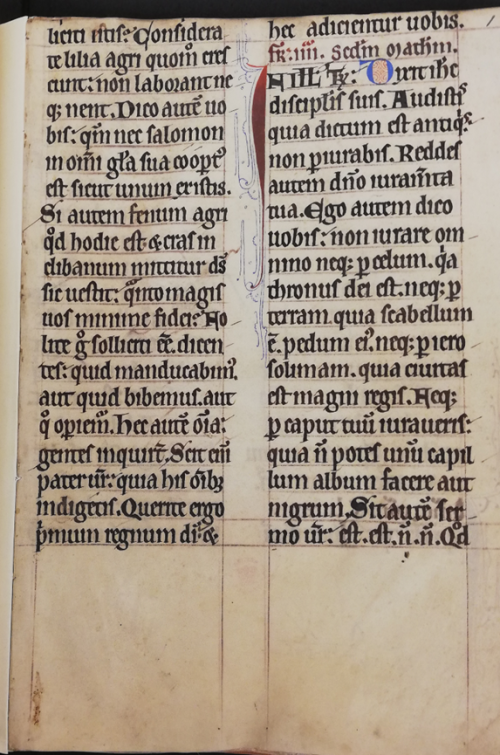 A final example of an unusual pairing can be found in Harley MS 6355. This manuscript contains a 16th-century treatise on gunpowder, just as the printed catalogue describes. What the catalogue does not mention is that it also contains four flyleaves with texts and music notation for liturgical feasts, taken from a 14th-century manuscript.

Many other Harleian binding fragments await further research. Not only do such leaves sometimes contain materials that are valuable sources for medieval history and art, but they also provide us with an insight into how they were used and re-used by their early owners. We hope to discover many more as our cataloguing project continues. Maybe you will have your own close encounters with some of these 'UFLs' (unidentified flyleaves).