Art and science in Renaissance Italy

Here at the British Library we’re big fans of Renaissance art and science. It’s the subject of our current exhibition, Leonardo da Vinci: A Mind in Motion (7 June–8 September 2019), and we also have a display about it in our permanent free exhibition space, The Treasures Gallery. Here’s a sneak peek of some of the beauties you can see in the Treasures display.

Early Renaissance Italy witnessed a remarkable flowering of the arts and sciences. Humanist scholars looked to medieval libraries to discover works from the past, which they copied, studied and developed in new ways. They were particularly interested in discovering classical works of ancient Greek and Roman culture, building on the movement to recover classical texts that had been taking place since the 12th century. But they were also stimulated by works of medieval science, both from the Latin and Arabic traditions. 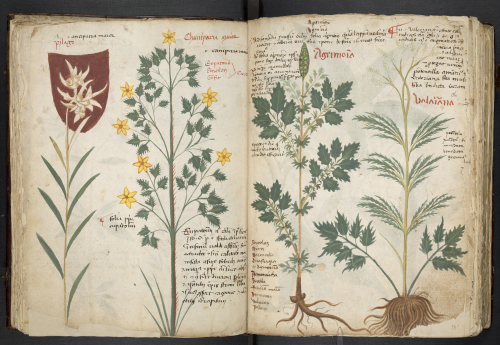 The increased study of plants during the Renaissance lead towards the development of the modern field of botany. In medieval Europe, knowledge about plants and their medicinal properties was transmitted in illustrated manuscripts known as herbals. They were based on ancient Latin and Greek sources, compiled and updated by medieval scholars. In the Renaissance, people started to revise herbals based on first-hand examinations of plants. This manuscript, known as the Codex Bellunensis, is largely an adaptation of the ancient work on medicinal plants, De Materia Medica by the Greek physician Dioscorides. But it also includes observations of local flora, in this case from the lower Dolomite Mountains in Northern Italy. On the left is the earliest known representation of the plant edelweiss, shown alongside eupatorium, agrimony and valerian. 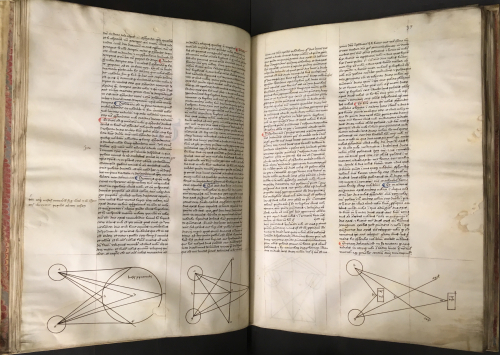 Renaissance scholars also looked to the Arabic world as a source of knowledge. This manuscript contains De aspectibus, a Latin translation of Kitāb al-Manāẓir (Book of Optics) by the 11th-century Arabic scholar Ibn al-Haytham, known in Latin as Alhazen. This work was the first to systematically demonstrate that vision is the result of light reflecting off objects and entering the eye. The book also includes ‘Alhazen's problem’, a mathematical problem concerning the reflection of light from spherical mirrors that was not solved algebraically until 1965. Translated into Latin around 1200, the work was carefully studied by western thinkers such as Roger Bacon (c.1219/20–c.1292) and Leonardo Da Vinci (1452–1519). The pages shown here examine the subject of binocular vision, with the diagrams illustrating how the visual axes of the two eyes, labelled ‘a’ and ‘g’, intersect. 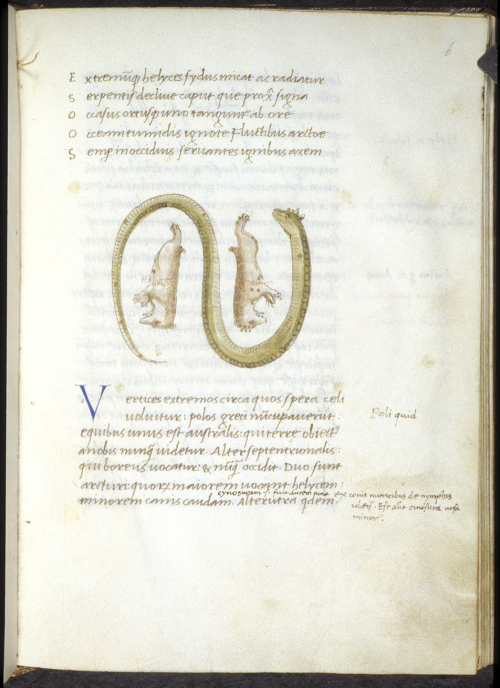 Aratea, a Latin translation by Germanicus of Aratus’ Phaenomena, Florence, 1465–1475:

The Aratea is a poem about the ancient constellations and their mythological origins. It was originally written in Greek by the ancient poet Aratus in the 3rd century BC. This particular Latin translation was made in around AD 14–19 by the Roman general Germanicus, who was the nephew of the emperor Tiberius, the father of Caligula and the grandfather of Nero, no less. The poem was an important source for the study of astronomy throughout the Middle Ages, but the humanist interest in rediscovering authentic classical texts led to a surge in its popularity in 15th-century Italy. This copy belonged to Francesco Sassetti of Florence (1421–90), a prominent banker for the Medici family. The pages on display describe and illustrate the constellations closest to the north celestial pole, Ursa Major (the Great Bear), Ursa Minor (the Lesser Bear), and Draco.

To see these manuscripts in person, come and visit the Treasures Gallery at the British Library. To learn even more about Renaissance achievements in art and science, don’t miss our current exhibition Leonardo da Vinci: A Mind in Motion at the British Library from 7 June until 8 September 2019.