Magical seals in an English Book of Hours

In addition to containing the daily cycle of prayer, Books of Hours sometimes include magical spells or incantations, reflecting their lay owners' concerns over physical and spiritual dangers. Stowe MS 16, a Book of Hours produced in London shortly before 1410, is an interesting example. This manuscript is mainly known to scholars because it includes a miniature of the Annunciation that has been attributed to Herman Scheerre (fl. c. 1388–c. 1422), a Flemish or German illuminator who was one of the most influential artists in early 15th-century England. 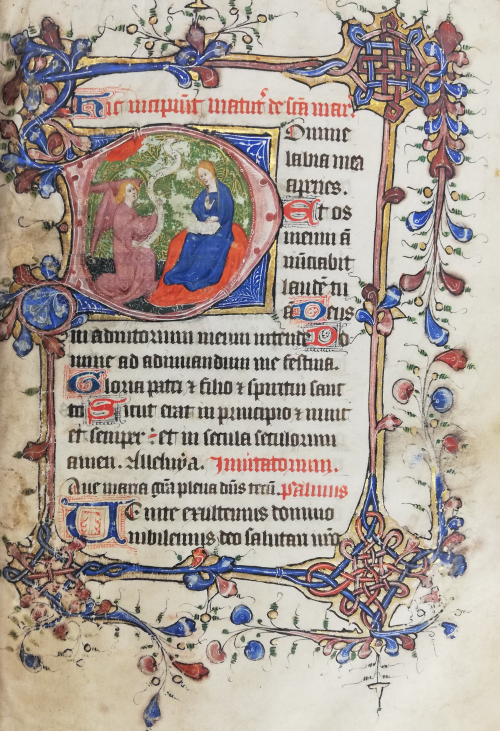 But another remarkable feature of Stowe MS 16 has so far gone unnoticed: a 15th-century owner — perhaps ‘George Rotherham’, who inscribed his name on a flyleaf — added four circular diagrams that, as their accompanying inscriptions explain, represent ‘seals’ that offered supernatural protection. The first is referred to as the ‘Seal of Solomon’, alluding to an ancient legend according to which the biblical King Solomon owned a seal ring with an engraved hexagram or pentagram, that enabled him to command demons. It formed the basis for a tradition of pseudo-Solomonic seals that flourished during the later Middle Ages. The inscription that accompanies the seal in Stowe MS 16 instructs the reader to use it as an amulet in battle: ‘Hoc signum Salamonis qui super se portaverit nec manu in bello erit captus’ (‘Whosoever will carry the seal of Solomon on themselves will not be captured in battle’). 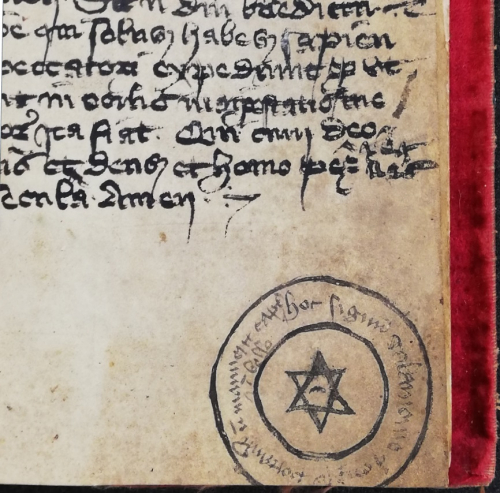 The owner of Stowe MS 16 also added incantations against ‘seven sisters’ (‘septem sorores’), fever demons who are named after seven types of fever, followed by three more magical seals that offered protection against enemies, water and fire, and evil. The inscription on the first seal reads: ‘Hoc signum fer [te]cum contra omnes inimicos’ (‘Carry this seal with you against all enemies’). 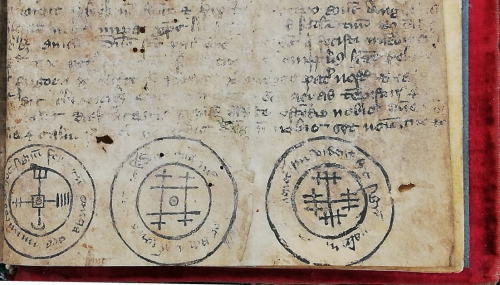 Magical seals were not usually copied into prayer books. Instead, they circulated in medical and magical manuscripts. For example, one 15th-century English medical manuscript (Royal MS 17 B XLVIII) contains a seal for thunderstorms: ‘Quando audieris tonitruum respice hoc signum et liberaberis; In nomine patris’ (‘When you hear thunder, look at this seal and you will be freed – In the name of the Father’). 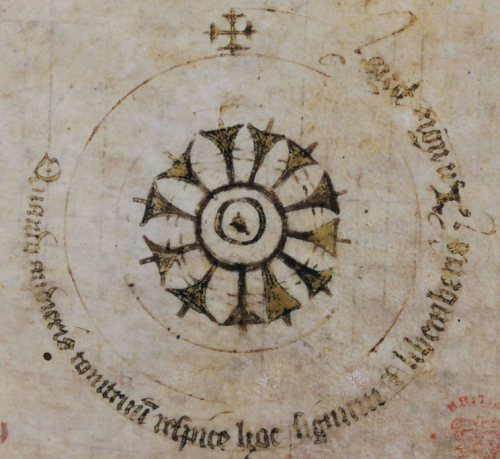 Magical seals were also copied onto separate parchment leaves that could be worn as amulets. One such leaf, now bound into Add MS 36674, contains on one side a so-called ‘Heavenly Letter’. This letter, invoking the divine names of God, was purportedly sent by Pope Leo III to Charlemagne in order to protect him in battle. On the leaf’s other side, thirty-two seals have been drawn in red ink. These complement the Heavenly Letter’s purpose since they claim to protect their user against imprisonment, wounds and death in battle. 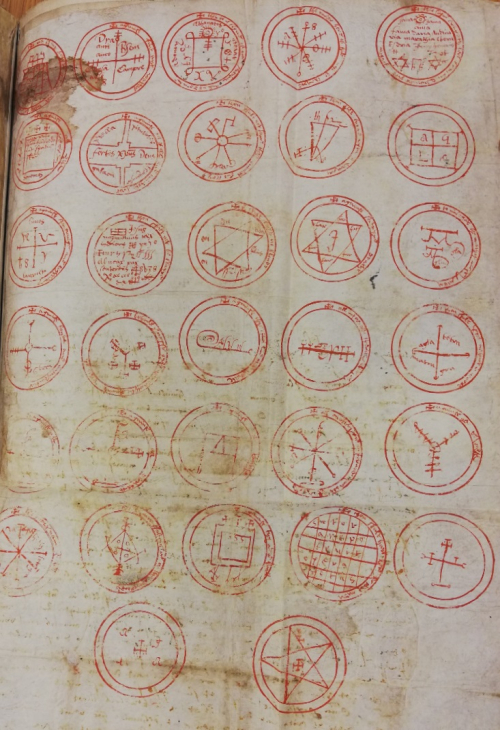 Another separate amulet leaf with magical seals is now bound into Add MS 15505. The amulet, produced in early 16th-century Italy, features a large circular diagram with ten magical seals inside it. At its centre is a seal with a ‘cross crosslet’ and the magical formula ‘AGLA’. It is circumscribed with the name ‘Antonius’ — probably referring to St Anthony of Egypt, who was often invoked against the plague — and is surrounded by eight more seals that provide protection against demons, enemies, evil and misfortune. The seals contain magical inscriptions such as ‘SATOR AREPO’, a popular magical formula that had been used on amulets for centuries (another example is found in Egerton MS 821). Each seal is flanked by the Greek letters ‘Chi’ and ‘Rho’, representing the name of Christ. 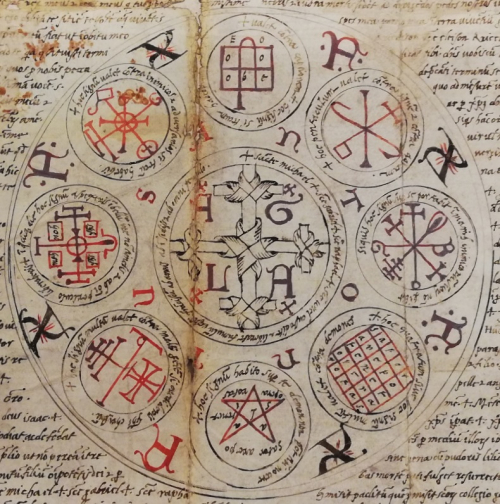 Magical seals were also copied onto amulet rolls. On one 15th-century English roll (Harley Roll T 11), they have been combined with devotional items such as the ‘Measure of the Side Wound’. This lozenge-shaped image purports to represent the true size of the wound in Christ’s side, inflicted when the Roman soldier Longinus pierced him with his lance. The accompanying text claims that when pregnant women wear the image on their bodies during childbirth, it will protect both them and their children. This suggests that the amulet roll may have been used as a birthing girdle, making particularly relevant its seals for staunching bleeding wounds and against sudden death (without having received the last rites). 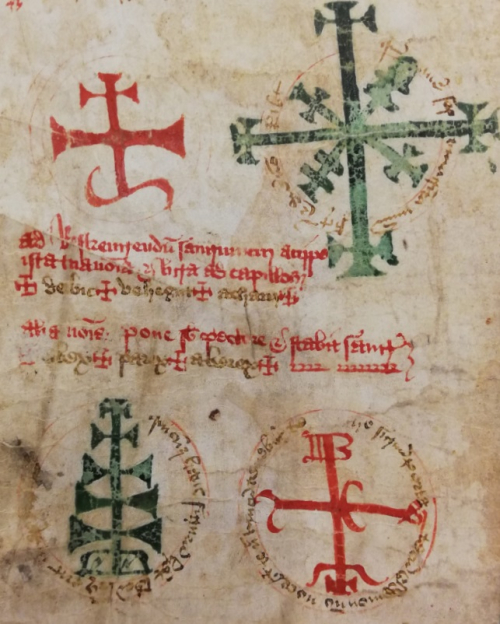 No less than sixty-three magical seals were copied onto a 17th-century English amulet roll (Add MS 25311). Many are aimed against evil spirits, but others against material and physical dangers: for example, it includes seals against venomous snakebites and poverty. The roll may have served as a multi-purpose amulet, or as a model from which single seals were copied onto smaller amulets. 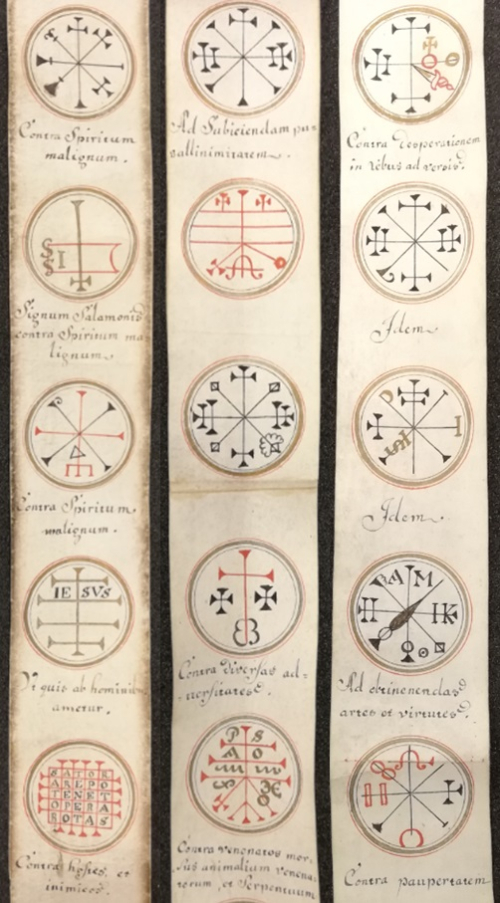 The owner of Stowe MS 16 who added the four magical seals to the manuscript probably copied them from the sort of medical or magical manuscripts that are shown here. In doing so, they evidently wanted to give their Book of Hours protective properties so that, in carrying it with them for their daily prayers, it would function equally as an amulet.