Medieval writers typically relied on Classical texts for their knowledge of the world beyond Europe. The Roman and Greek sources which they consulted informed them that legendary people inhabited distant regions. One of the most influential works was the Natural History of the Roman author Pliny the Elder (AD 23–79). Pliny described people with the heads of dogs (Cynamolgi) and four feet (Artabatiae) in Ethiopia, and with horses’ hooves as feet (Hippopodes) in the Baltic. 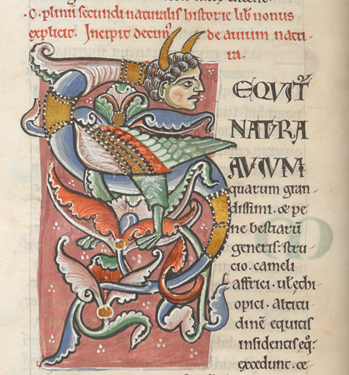 The Classical 'monstrous' people also feature in the Etymologies of the Spanish author Isidore of Seville (570–636). Isidore, who considered such strange beings to be signs of God, claimed that Libya was home to the Blemmyae, a headless people who had their mouths and eyes in their chest, and the Antipodes (‘opposite-footed’), a people whose feet pointed upward. In India, Isidore located the dog-headed people called Cynocephali (‘dog-headed’) and the Cyclopes (‘round-eyed’), a people with one eye in the middle of their foreheads. Ethiopia was supposedly inhabited by the Sciapodes ('shade-footed'), having a single leg with a large foot which they used to shade under during extreme heat. 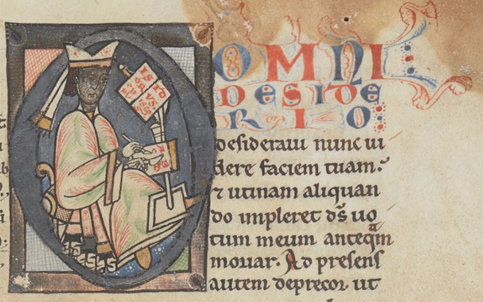 Isidore of Seville depicted at the opening of the Etymologiae (France, 4th quarter of the 12th century): Add MS 15603, f. 1r

Tales of marvellous inhabitants were often included in descriptions of the regions outside Europe. For example, the early 8th-century Cosmography, a fictitious travelogue of a certain ‘Aethicus Ister’, reported that a dog-headed people lived on a northern island above Britain. In Scythia, female warriors known as Amazons reared the cubs of minotaurs (half-man, half-bull) and centaurs (half-man, half-horse) and trained them to fight in war.

Testament to the popularity of these tales is a 12th-century Bible from Arnstein Abbey in Germany (Harley MS 2799). On a page that was originally left blank have been drawn seventeen legendary people, including the Cynocephali, Cyclopes, Blemmyae (first row), and Sciapods (third row). 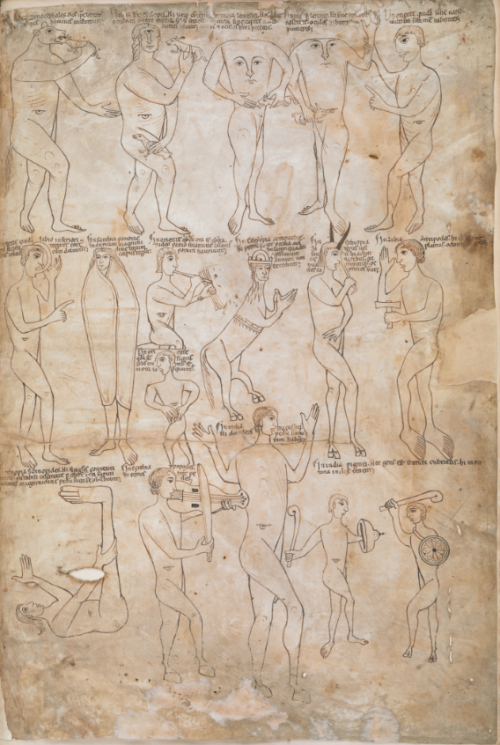 The existence of strange peoples became a popular theme in medieval accounts of Christian conversion. These works signalled that, if even 'monsters' could be taught Christianity, there should be no reason why the entire world could not be converted as well. The so-called Letter of Prester John is an example of this: it purports to be a letter from a priest named John addressed to Manuel of Constantinople and Frederick Barbarossa in 1163. The priest claims to govern a powerful kingdom in India, filled with gold and jewels, and inhabited by strange creatures that have converted to Christianity. The letter claims that the kingdom has:

(‘archers [i.e. centaurs], savage men, horned men, fauns, satyrs and women of the same race, pygmies, dog-headed men, giants whose height is 40 cubits, one-eyed men, cyclopses and a bird which is called ‘phoenix’, and almost every kind of animal which is under heaven’, trans. by Keagan Brewer, Prester John (2015), p. 69) 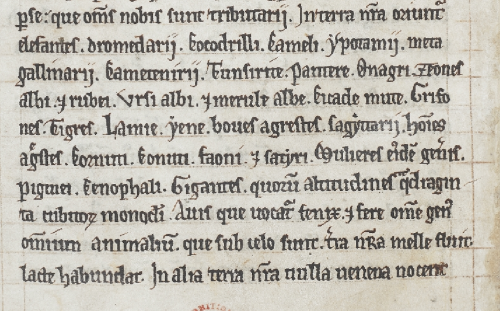 The association between monstrous people and conversion to Christianity perhaps explains why the artist of an early 13th-century English Psalter (Arundel MS 157) chose to paint a figure that looks like a Sciapod at the opening line of Psalm 84:5: ‘Converte nos, Deus salutaris noster’ (‘Convert us, God our saviour’). However, the Sciapod — who appears to be lying upside down in order to find shade under his foot — could also be a pun on the Psalm verse, since the Latin word convertere can be translated both as ‘convert’ and ‘turn upside-down’.