Reading the runes in Beowulf (so seaxy)

Students of the Old English epic poem Beowulf (which survives uniquely in Cotton MS Vitellius A XV) may be familiar with the fight between our hero and Grendel’s monstrous mother, and the part played in that encounter by a marvellous sword. As the pair tussle, Beowulf stumbles and falls to the floor. His opponent stabs him with a knife, and he is only saved by his chain mail. Beowulf then sees a sweord eotenisc (a sword of giants, l. 1558), which he grabs and uses to kill Grendel’s mother. Seeing Grendel’s corpse, Beowulf uses the same sword to cut the monster’s head from his body. As soon as Grendel’s blood touches it, the blade melts away like ice and only the hilt is left intact.

Later, when Beowulf returns to Heorot — the hall of the Geatish people — the sword hilt is examined by Hrothgar, their king:

('Hrothgar spoke, the hilt he examined,
— the ancient relic — where was written
of that primordial war, when the flood slew,
with raging waves, the race of giants') 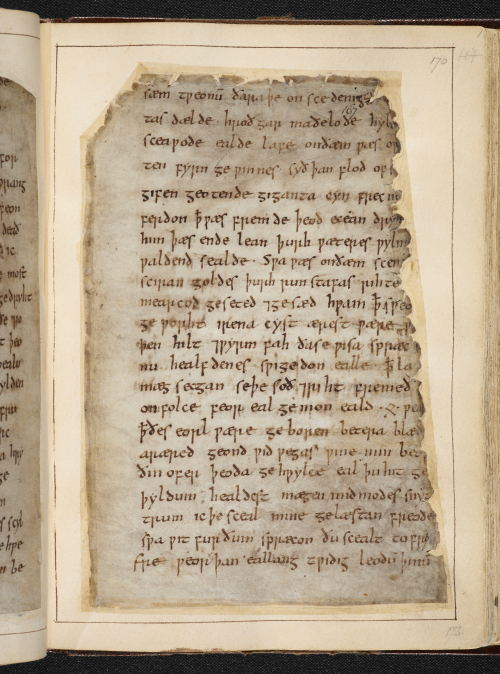 The poet goes on to describe this strange sword in more detail.

('On those guards of shining gold
were runic staves, rightly marked

Their set-down shapes told a tale: for whom that sword was wrought,
best of irons, in bygone days,
with twisted hilt and serpent patterns.')

Beowulf is not easy to translate, but there are examples of ‘hypermetric lines’ in many Old English poems, including at ll. 1705–07 of Beowulf. What is important is that the sword is described as gemearcod (marked) with runstafas (runic staves). These markings gesetod ond gesæd, literally ‘set-down and said’ or ‘established and told’, the story of the sword’s original commissioner. This is quite a sword! It tells the story of the flood that killed the giants — usually thought to be a reference to the Biblical flood — and also the story, in snaking patterns and runic staves, of its own creation.

What kind of sword was the poet imagining? What was the significance of runes for the poet? What, indeed, are runes? The runic alphabet was used to write Germanic languages before the Latin alphabet arrived along with Christian missionaries. Runes are generally straight sided, hard-lined beasts. There are no round shapes in the letters as traditionally formed, probably because this made them easier to carve into wood and stone. The runic alphabet and the Latin alphabet were used in tandem in Anglo-Saxon England, and they were on friendly terms — two runic letters routinely appeared in Old English texts written in the Latin alphabet. The first was Þ (lowercase þ), which makes a ‘th’ sound. Runic letters also have names — this one is called thorn, which means ‘thorn’ in Modern English. The second runic letter was Ƿ (lowercase ƿ), which equates to a modern ‘w’. Its name is wynn, which means ‘joy’ (whence we get Modern English ‘winsome’).

These two runes appear most commonly in Old English texts written in the Latin alphabet (although the ƿ is often changed to ‘w’ in modern editions). But they weren’t the only runes that made their way into texts written in the Latin alphabet. In fact, runes crop up quite frequently in Anglo-Saxon manuscripts. The poet Cynewulf (one of the very few named poets from the Anglo-Saxon period) embedded runic signatures in his works, some of the riddles of the Exeter Book contain runes, and they also appear in the Beowulf manuscript, on the very same folio where Grendel’s sword hilt is described. 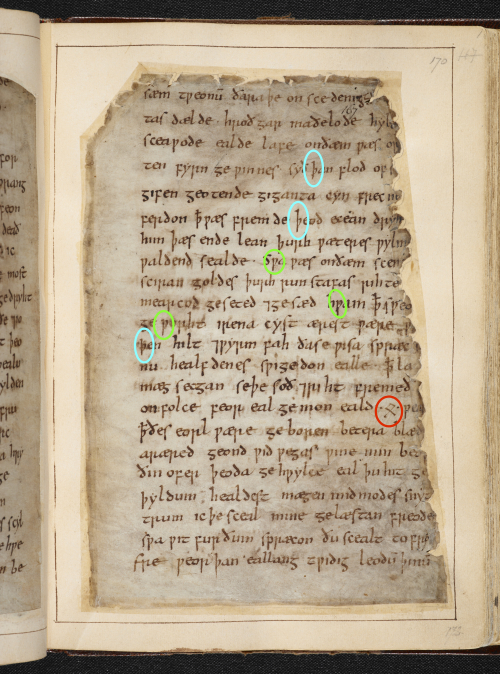 On this folio you can see an abundance of the commonly occurring runic letters, ƿ and þ, but 8 lines from the bottom, on the tattered, right-hand edge of the folio, you can see something quite unusual in this manuscript — ᛟ the ethel rune. Ethel means estate or homeland and here the scribe used it as an abbreviation for the first element in the compound ethelweard, meaning guardian of the homeland (weard means ‘guardian’ giving us Modern English ‘warden’). 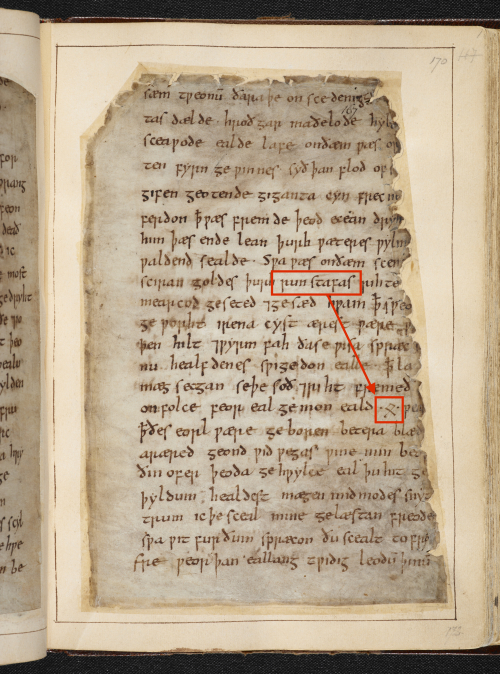 Why did the scribe chose the runic abbreviation at this point? Were they prompted by the reference to runstafas a few lines earlier? This brings us back to the sweord eotenisc, the sword of giants. In considering what kind of sword the poet was imagining, archaeology provides some clues. Those of you lucky enough to visit our recent Anglo-Saxon Kingdoms exhibition may remember the Seax of Beagnoth, also known as the Thames Scramasax, a 10th-century Anglo Saxon seax (a long, single-edged knife) on loan from the British Museum. On its blade the seax boasts the only complete carved Anglo-Saxon futhorc, or runic alphabet, as well as the name ‘Beagnoþ’ ᛒᛠᚷᚾᚩᚦ, who is assumed to be its commissioner or creator. 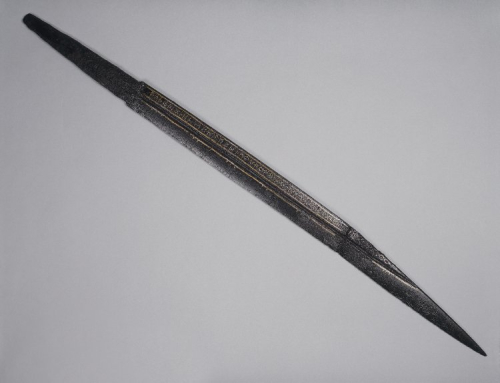 This seax does not contain a narrative of the kind described in Beowulf. As yet, no weapons have been discovered that have a narrative inscribed on them, and it’s hard to imagine one having enough space to tell such a story. Perhaps, in describing these runstafas, the poet was not imagining a written text as we would know it today. Perhaps the runes on the sword hilt weren’t meant to be read, but more to prompt the recollection of a particular story. Maybe the runes made by giants were more than just letters — they conveyed something powerful. Maybe the first scribe of Beowulf (only the first of the text’s two scribes used the ethel rune) echoed that power as only a scribe could, by including their own runic abbreviation just a few lines later.

If you’re intrigued by any of these questions, then why not book a place on the Library’s Adult Learning course: Writing in Medieval England, 3–4 August. There are only a few places left, so get your ticket now! Meantime, don’t forget to visit our exhibition Writing: Making Your Mark, which closes on 27 August.