The first man on the Moon

This weekend, the world is remembering Apollo 11, the first Moon landing, and the two astronauts who first stepped unto the lunar surface on 21 July 1969. Commander Neil Armstrong and lunar module pilot Buzz Aldrin were the first humans to walk on another astronomical body, in what was to become one of the most earth-shaking events of the 20th century.

While Armstrong and Aldrin were the first humans on the Moon, there is a figure in medieval literature who may have got there first, around Easter 1300.* In the Divine Comedy, Dante Alighieri describes his fantastical journey down into the nine circles of Hell, upwards on the Mount of Purgatory, and away through the spheres of Heaven: from Inferno to Purgatorio and into Paradiso. Written in Italian in the early 14th century, Dante’s Comedy is one of the most influential poems of all time, a synthesis of medieval culture, science, philosophy, theology, scholarship and political science.

[* Nor should we forget Chang'e 嫦娥, the Chinese goddess of the Moon, who, according to legend, has been living there for some 4,000 years.]

In the Comedy, Dante-the-pilgrim travels through the afterworlds in search of self-knowledge and truth, driven by the desire for union with the divine. Passing through Hell and Purgatory, he is ready to ascend to the stars in Heaven, guided and instructed by the fascinating figure of Beatrice. Dante’s complex Heaven is made out of concentric spheres, each corresponding to a heavenly body in the cosmological system inherited from classical antiquity and modified by Christian thought. Outside the seven planetary spheres (including the Sun in this geocentric model), there is the sphere of the fixed stars, the first mover and the Empyrean, enclosing all the others but lying beyond time and space. To arrive there, the pilgrim must first pass through the sphere of the Moon, located closest to Earth. 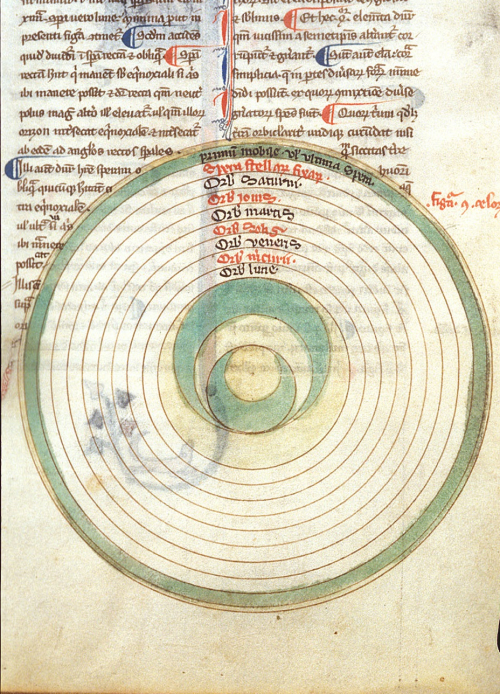 Dante’s launch from the Earth’s atmosphere opens Paradiso, the third and last section of the Divine Comedy. Comparing his journey upwards to sailing a little ship into the unknown, he explains in classicizing language that he is the first on this kind of mission. In Allen Mandelbaum’s translation:

The waves I take were never sailed before;
Minerva breathes, Apollo pilots me,
and the nine Muses show to me the Bears. (Paradiso, 2.7–9) 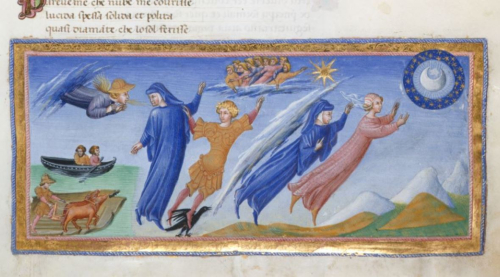 Fly me to the Moon: Dante and Beatrice launch towards the Moon in this Tuscan manuscript of the Divine Comedy from around 1444: Yates Thompson MS 36, f. 131r

Dante is on his own Apollo mission to the stars. Illustrated manuscripts of the Divine Comedy typically depict his journey as a flight upwards. The Moon is usually identified by its colour and partial phase, to distinguish it from other celestial bodies. In a manuscript painted in Florence in the 1440s (Yates Thompson MS 36), Dante’s lunar mission is remarkably faithful to the poetic text quoted above: the illustration depicts the boat sailing away from familiar, agricultural shores, while Minerva blows from a cloud. The pilgrim is being led by the figure of Apollo, as the chorus-like group of Muses point towards a star (presumably the Northern Star).

Dante’s first stop on the Moon is a giant leap of imagination, but a small step in the traveller’s consciousness, as he instantanously makes a landing:

Beatrice gazed upward. I watched her.
But in a span perhaps no longer than
an arrow takes to strike, to fly, to leave

the bow, I reached a place where I could see
that something wonderful drew me; and she
from whom my need could not be hidden, turned

to me (her gladness matched her loveliness):
“Direct your mind to God in gratefulness,”
she said; “He has brought us to the first star.” (Paradiso 2.22–30)

Propelled by love, Dante’s imaginative mind-capsule lands on the surface of the Moon, whereupon he starts inquiring about the nature of the ‘dark spots’ on the lunar surface. In his own, inquisitive way, Dante-the-traveller is collecting information about the Moon. Armstrong and Aldrin brought 21kg of lunar material back to Earth. Dante gathered information which he took with him to Mercury, his next stop. 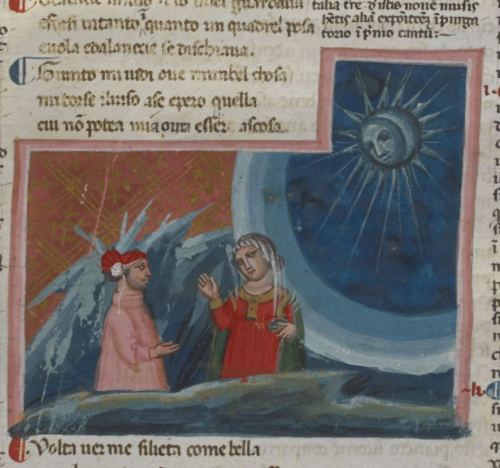 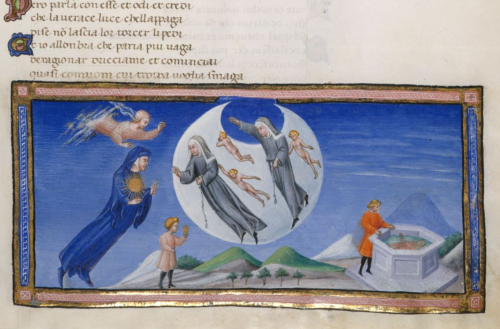 Burning with the desire to know more, Dante reaches the Moon, where the blessed can answer his questions: Yates Thompson MS 36, f. 132r

The year before Apollo 11, three astronauts travelled to the Moon, orbited it, and returned safely to Earth. One of them, William Anders, took a famous photograph of the Earth from the lunar orbit known as Earthrise. Dante took no photographs on his interstellar voyage, but he left us a poetic description of Earth from the heaven of the fixed stars, outside the planetary spheres:

And all the seven heavens showed to me
their magnitudes, their speeds, the distances
of each from each. The little threshing floor

that so incites our savagery was all —
from hills to river mouths — revealed to me
while I wheeled with eternal Gemini. (Paradiso 21.148–153)

‘The little threshing floor’, the insignificant dot in the immensity of the cosmos, evokes in the reader of the Divine Comedy the same thoughts as Anders’ Earthrise photograph. The onward and upward quest of discovery and knowledge, whether medieval or modern, concludes with a gaze on ourselves and with an affirmation of responsibility for the future.