The British Library’s current exhibition, Leonardo da Vinci: A Mind in Motion (7 June–8 September 2019), investigates the great thinker’s fascination with water. But Leonardo was not the first to send his imagination plunging beneath the waves. Here are some of the ways that medieval people imagined being able to explore underwater. 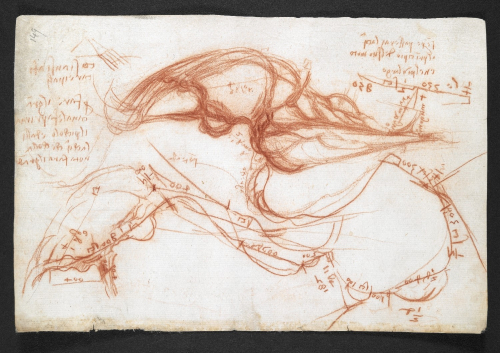 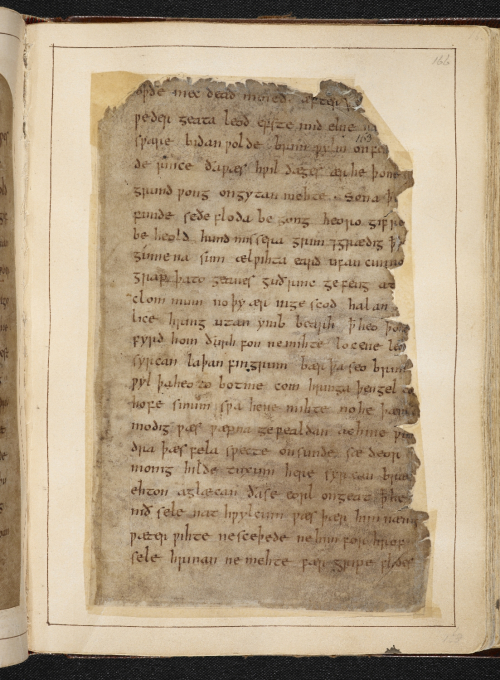 In the Anglo-Saxon period, underwater exploration belonged to the world of heroic poetry rather than human technology. In the Old English epic poem Beowulf, the hero journeys to the bottom of a horrifying mere to fight Grendel’s Mother in her watery lair. He dresses in full war-gear, a mail-shirt and a gold boar-embellished helmet, and arms himself with a precious sword named Hrunting. Then after briefly settling his affairs in case of his death, he dives into the lake:

The man of the Weder-Geats moved briskly, would hardly wait for an answer; the surging water took possession of the war-maker. It was then a good part of the day before he could make out the level bottom (Translation by R. D. Fulk).

In a hall in the depths of the lake, Beowulf and Grendel’s Mother engage in a ferocious fight. For a long time the adversaries seem to be evenly matched, but the decisive moment comes when Beowulf notices an enormous sword that was made by giants in ancient times. He grabs the sword and swings it at the lake-woman, slicing off her head.

The poem makes no attempt to explain how Beowulf is able to survive underwater—he just can. His status as a legendary hero and the strongest man alive places him outside the ordinary limits of human ability. In a world of giants, dragons, magical swords and cursed treasure, the hero is a supernatural figure. Beowulf is up to any challenge, no diving apparatus required. 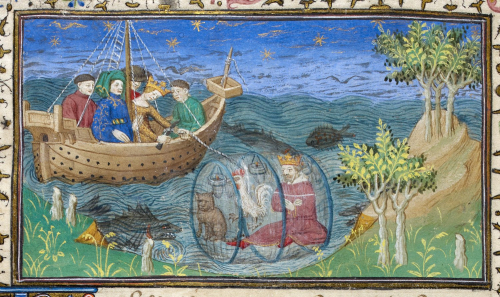 Another of medieval literature’s most memorable underwater adventures is that of Alexander the Great. The ancient Macedonian king and formidable military commander was one of the greatest heroes of medieval romance. One episode associated with Alexander in the romance tradition describes how he travels to the bottom of the sea to explore its wonders.

Unlike Beowulf, Alexander is hampered by the real-world necessity of having to breathe. To solve this, he designs an air-tight barrel made from glass which is lowered on chains from a boat. Inside his proto-submarine, Alexander takes lamps to light his way and two animal companions, a cockerel to tell the time and a cat whose breath purifies the air.

Alexander’s underwater journey shows that medieval people were thinking creatively about how a person could venture safely underwater. That’s not to say that the design would work: for one thing, the barrel would float without ballast; for another, a cat’s breath does not purify air so Alexander would have a very limited air supply. 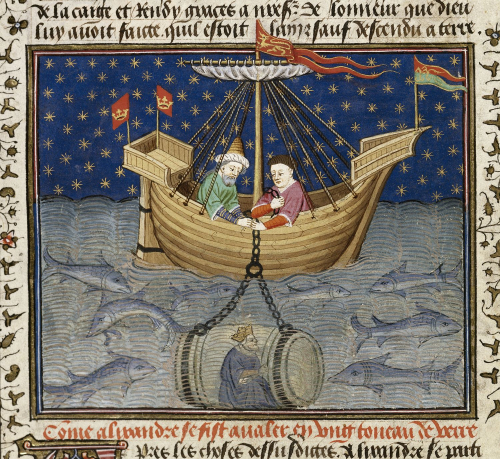 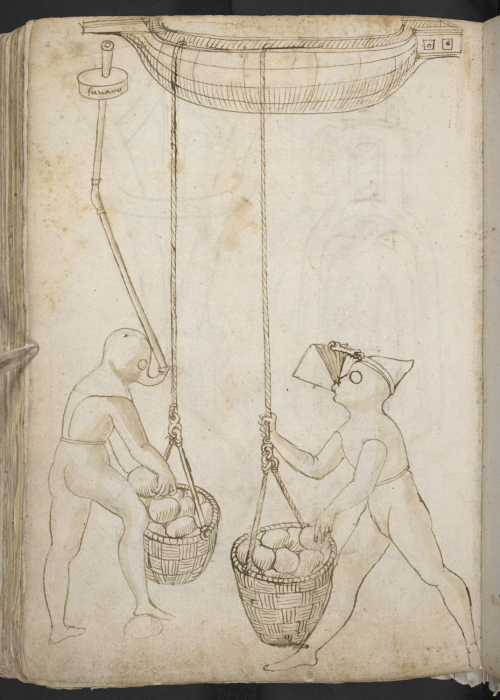 Is not until the 15th-century that people began to design diving apparatus with a view to practical use. This sketchbook, compiled in the 15th-century by an unknown Italian engineer, contains designs for diving suits that might have inspired Leonardo's (you can also see this manuscript in the exhibition, Leonardo da Vinci: A Mind in Motion, displaying a design for a water wheel).

The diving suits would allow a person freer movement than the barrel, so that the divers can carry out tasks underwater such as loading these baskets with rocks. With the figure on the left, the engineer has attempted to solve the problem of air supply by feeding air through a hose, connected at one end to a float on the surface and at the other to the diver’s mask. This is close to the design that was finally employed in the first successful diving suits, but with one major difference. The Renaissance engineer had not realised that the air supplied to the diver would have to be pressurised to account for the increased pressure underwater. 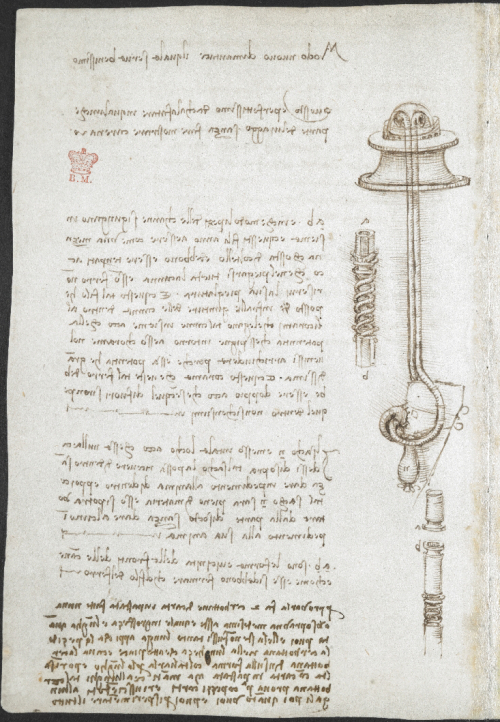 Leonardo’s diving apparatus from the early 16th century follows roughly the same design as the anonymous sketchbook, but adds some improved features. His diving mask is provided with two hoses, one to bring fresh air in and the other to take old air out. He has realised that the hoses will need to be reinforced with metal rings to stop the water pressure from closing them up. The float is also modified to prevent water accidentally spilling into the air supply. But crucially, Leonardo did not think to add an air compressor to the design so in practice the diver would not be able to breathe in deep water.

It was not until the 18th century that the first successful diving suits were made. But from Beowulf to Leonardo, people had long been coming up with creative ways to explore the world beneath the waves. To admire Leonardo’s design for diving apparatus in person, don’t miss the exhibition, Leonardo da Vinci: A Mind in Motion, at the British Library from 7 June–8 September 2019.