Have you ever wondered how a 16th-century poet gathered their works together? A writer with an eye to posterity might have followed the example of Sir Thomas Wyatt (c. 1503–1542), poet, ambassador and rumoured lover of Anne Boleyn. In the 1530s, Wyatt arranged for clear and authoritative copies of his verse to be transcribed into an album under his own supervision. The resulting manuscript, Egerton MS 2711, has stood the test of time. It is one of the earliest examples of an English poet’s collection of their own poems. 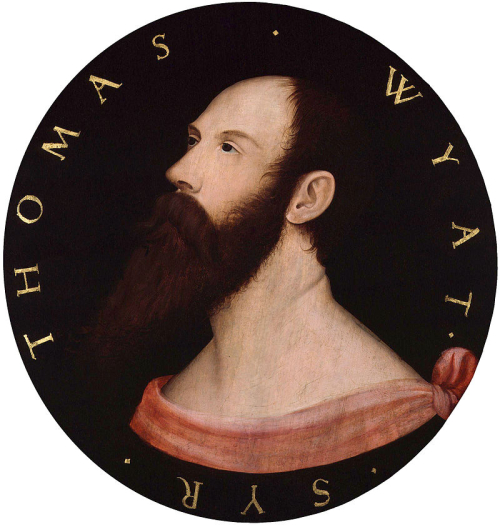 But Wyatt’s collection did not stay tidy for long. Changes in handwriting reveal that the poet himself took over from his scribes (or amanuenses), first to correct and alter some of the poems, and later to compose new works directly into the album. It is thus the only surviving example of Wyatt’s poetry in his own handwriting. Because the manuscript's purpose evolved during his lifetime, Egerton MS 2711 offers a fascinating glimpse of a Tudor poet at work. 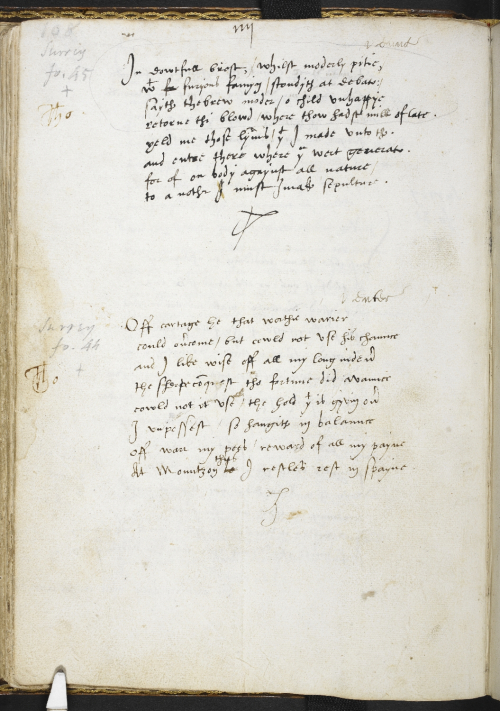 The manuscript reveals that Wyatt sometimes had trouble making up his mind. He often tweaked lines in some of his finished poems, and he experimented with alternative rhyme-words when composing new ones. One of the revised poems is the sonnet ‘If waker care, if sudden pale colour’, in which Wyatt imitated six lines of Petrarch’s Sonnet 188. Wyatt’s alterations to the poem can be read in light of his rumoured relationship with Anne Boleyn: the poem contains a reference to a ‘Brunet’ who ‘set my wealth in such a roar’, but the manuscript shows that the line originally read, ‘her that did set our country in a roar’. 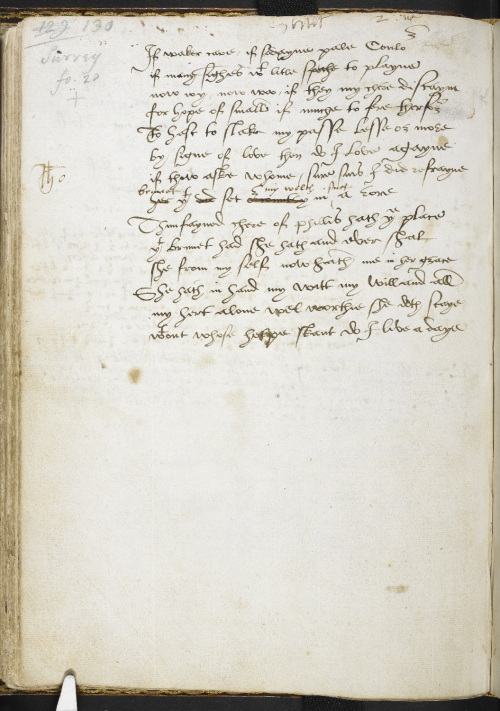 Wyatt’s decision to begin composing poems into the volume may have been related to a journey he made to mainland Europe, as English ambassador to the Spanish court from 1537 to 1539. A satirical poem in the manuscript describes the busy life of a diplomat, who ‘trots still up and down / and never rests but running day and night / From Realm to Realm from city street and town’. When the volume became a working notebook for Wyatt, it also began to reflect his evolving network of colleagues: the handwriting of one scribe who copied verses into the volume has been identified as that of John Brereton, one of Wyatt’s diplomatic secretaries.

As well as providing a place for Wyatt’s poetry to be recorded during his lifetime, the manuscript also became a space for later readers to engage with his work. After Wyatt’s death, the poet Nicholas Grimald made several annotations in the manuscript, such as simple headings like ‘a Sonnett’. Meanwhile, Wyatt’s own son, Thomas, added more of his father’s poems to the collection, and even copied out two letters of paternal advice he had received during his father’s Spanish embassy. (Thomas Wyatt did not necessarily heed his father's advice, since he led an infamous rebellion against Queen Mary, and ended his life on the block at the Tower of London in 1554.) 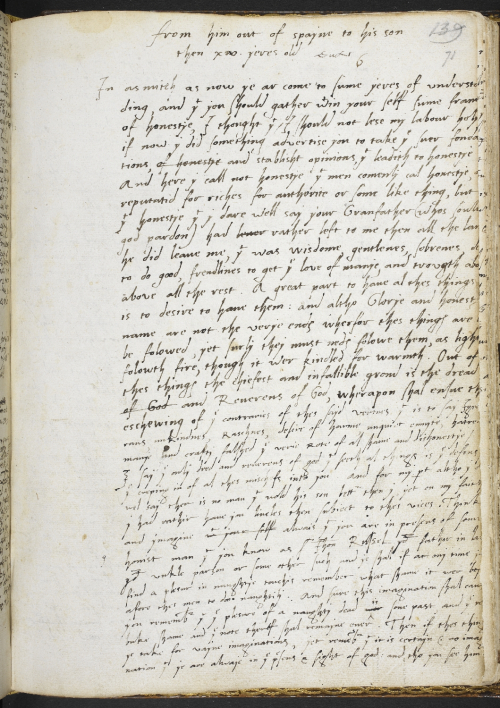 A letter copied into the manuscript by Thomas Wyatt the Younger: Egerton MS 2711, f. 71r

Despite the many hands involved in the creation of this manuscript, early owners and readers were careful to include material that would shed more light on Wyatt’s life and work, and solidify his reputation. As a result, Egerton MS 2711 very much remains a collection of Wyatt’s poems rather than a multi-authored anthology like the Devonshire manuscript (Add MS 17492).

A later owner of the manuscript, John Harington the elder, decided to include a categorisation of the poems by genre, while John Harington the younger entered some of his own paraphrases of the psalms following those made by Wyatt. Also thanks to the Harington family, many of the early pages of the manuscript are covered with copious mathematical notes and diagrams, which sometimes render Wyatt’s words all but illegible. 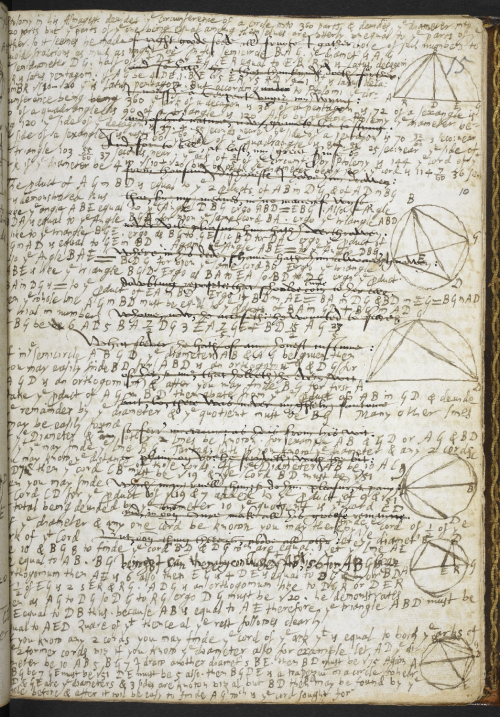 Some pages are less easy to read since they are now covered with mathematical notes: Egerton MS 2711, f. 10r

Of course, nowadays we would discourage any further scribbles appearing in Thomas Wyatt's manuscript. But that doesn't mean that you can no longer interact with this important collection of poems. We are delighted to say that Egerton MS 2711 has been digitised, so that modern readers can explore Wyatt's handwriting for themselves. This manuscript can be accessed in full and for free on the British Library's Digitised Manuscripts site.