There are only a few days left to visit the British Library's major exhibition, Writing: Making Your Mark. Recently, we dedicated a blogpost to one of the exhibits that has undoubtedly captured our visitors’ attention for its length, beauty and interest: the so-called Ravenna papyrus.

Another object on display, quite different from the Latin papyrus in terms of its size, nature and content, has also raised considerable public interest. It is a small potsherd, measuring 6.7 x 10 x 0.7 cm, whose outside (convex) side was used to host writing (Ostracon 13993). It is just one of the almost 4,200 potsherds, written in Ancient Greek, which form part of the British Library collections. They are known as ostraca (singular ostracon). You may not be immediately familiar with this term, but a modern English verb is derived from it. In Athens, in the 5th century BC, names of political figures who were believed to represent a threat to democracy were scratched onto the surface of potsherds, which were then deposited in urns. If a certain number of votes was reached, the person was expelled, that is, ostracised, for a period of ten years. 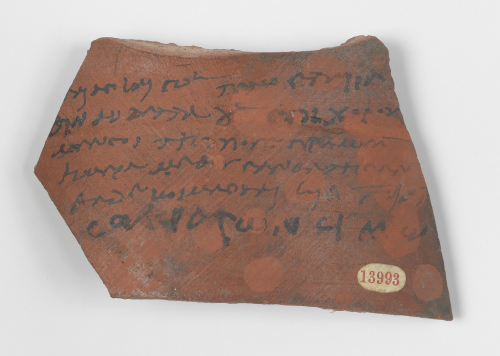 The ostracon on display in Writing: Making Your Mark, dated 7 October 110 (Ostracon 13993)

Writing on pottery was common in the ancient world, and served different purposes. Containers of various types and shapes could be inscribed with information as to their contents, origi, or destination, especially for trade. Such labels, called ‘tituli picti’ or ‘dipinti’, were generally executed on the neck or shoulders of the amphora in red or black ink. However, these painted inscriptions are not considered to be ‘ostraca’, even when they are preserved in fragmentary form.

In contrast, shards of broken pots were commonly recycled and used as a writing material. For example, in Graeco-Roman Egypt ostraca were widely employed for writing many kinds of text, despite their disadvantages. Their smaller surface could only host short texts; they were heavier than a sheet of papyrus; and they could not be sealed. On the other hand, such shards were not only easy to source, such as in households and rubbish heaps, but they were also free of charge. Writing was usually traced on them in ink using the calamus, a reed pen employed for writing Greek and Latin texts on papyrus, or the reed brush for Egyptian writing. In Writing: Making Your Mark, our visitors have the opportunity to view an example of a reed pen in Arabic style, with the nib cut left oblique in order to favour writing from right to left.

As a result of their widespread use, ostraca from Egypt bear a wide variety of Greek texts. These include everyday documents such as tax receipts, lists, accounts and letters, as well as writing exercises and literary texts. At times, it can be difficult to tell whether these literary works were themselves being copied as writing exercises. One of the most famous examples of ostraca preserving a literary text is a Ptolemaic ostracon now held in the Biblioteca Medicea Laurenziana in Florence (PSI XIII 1300). This contains an ode by Sappho, of which only a few words are quoted by other ancient authors. 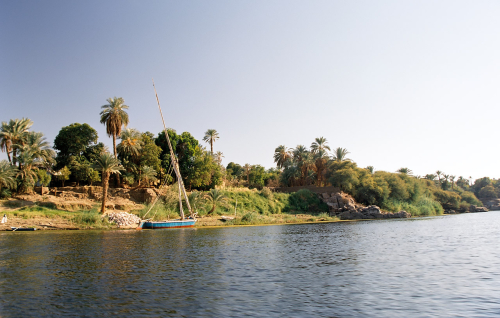 The ostracon on display in our exhibition dates from over 1,900 years ago, and it contains a type of permit which is only rarely attested in our sources. In it, two tax collectors authorised a woman named Thinabdella to perform her activity as a sex-worker on a specific day. The ostracon is one of a handful of such permits to survive from Elephantine, an island off Aswan in Upper Egypt. The text on our ostracon reads:

Pelaias and Sokraton, tax farmers, to the ‘hetaira’ Thinabdella, greetings. We grant you permission to have intercourse with whomever you wish in this place on the day written below.

The date then follows, corresponding to 7 October 110, alongside the subscription of Sokraton, penned in a different hand. Why the permit was granted for a single day has been a matter of debate. Did Thinabdella come to the town for a short stay, or on a specific occasion, such as a festival?

There are just a few days left to see the ostracon in person at Writing: Making Your Mark: the exhibition closes on 27 August. If you would like to see more ostraca, you can check them out on Digitised Manuscripts, where you will currently find over 145 ostraca originating from Elephantine, with more yet to come!

The exhibition catalogue, in both paperback and hardback, is available from the British Library Shop. 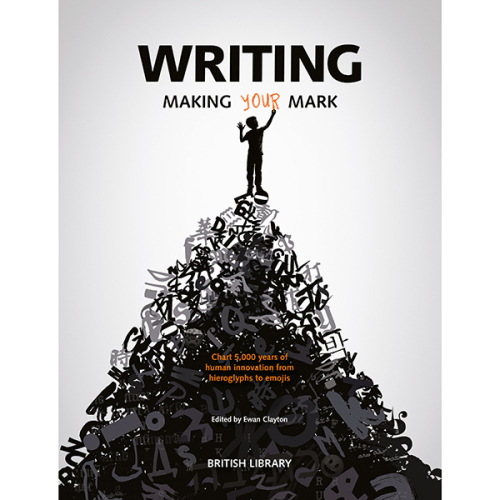