There are lots of fabulous things to see in our exhibition, Writing: Making Your Mark, ranging from an early homework book (on a wax tablet) to an entire manuscript written in Tironian notes. One of our star exhibits is also one of the largest, namely the Ravenna Papyrus, the longest intact papyrus held at the British Library. 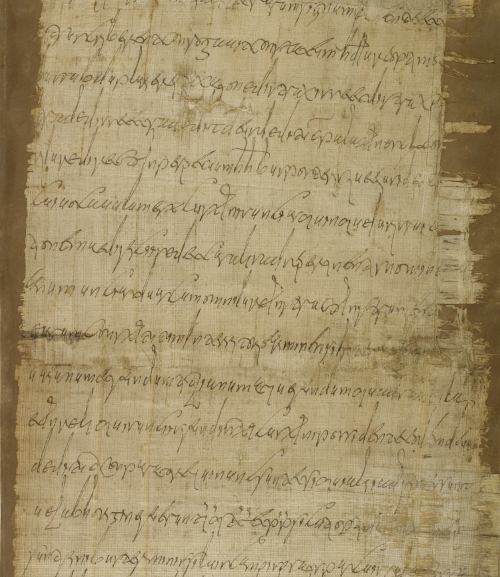 Measuring 224 cm (long) by 20 cm (wide), the Ravenna Papyrus (Add MS 5412) records a sale of land in the 7th year of the reign of Justin II the Younger (AD 572) by Domninus, a hayward (agellarius) from Cesena, to a court officer named Deusdedit. Domninus agreed to sell five-twelfths of a small estate called Custinis and two-twelfths of a farmhouse called Bassianum, for the price of five gold solidi. Five witnesses signed the deed, that is, Pascalis, Eugenius, Moderatus, Andreas and Vitalis, while the notary (forensis) was named Flavius Iohannis. The document can be viewed in its glorious entirety on the Library's Digitised Manuscripts site.

One significant feature of this papyrus, aside from its great length, is its handwriting. Flavius Iohannis, the notary, wrote a professional and rapid form of the script known as New Roman Cursive. This was the administrative script of Late Antiquity, first attested in the late 3rd century, and characterised by the introduction of lower-case forms and time-saving devices such as loops. The five witnesses also wrote in the same script: the handwriting of Pascalis and Moderatus is upright and slow in execution, while that of Eugenius is more rapid and rounded. Andreas’s hand is equally rapid but inclined to the right; Vitalis used a more rough form of this script.

The Ravenna Papyrus bears witness to the handwriting of several scribes, all of whom wrote differing forms of New Roman Cursive

In the Middle Ages this document was held in the archbishop’s archive at Ravenna. At the beginning of the 18th century it came into the hands of Giusto Fontanini of Rome (d. 1736), and after his death it passed to Ludovico Zucconi of Venice from whom it was bought for the Pinelli Library in Venice. On the occasion of the sale of the Pinelli library on 2 March 1789, it was acquired for the British Museum Library. We are delighted that so many visitors have been able to examine it in person this summer in Writing: Making Your Mark, and we hope that you also enjoy the opportunity to view it online.

Writing: Making Your Mark is on at the British Library until 27 August 2019.

The Ravenna Papyrus (Add MS 5412) is available in full on Digitised Manuscripts.