Many of you may be aware, especially if you follow us on Twitter, that we have a penchant for a little manuscript known as Le Petit Livre d'Amour (Stowe MS 955). Written by Pierre Sala early in the 16th century, it was presented as a love-gift to his mistress (and future wife), Marguerite Builloud. On the reverse of a portrait of the lover (f. 17v) is written, 'Set de vray le portret de Pierre Sala mestre dotel de ches le roy avec des enimes quil avoit fet a sa mestresse qui estoit grand honcle a madame de Ressis laquelle est sortie de la mayson de Guillien en Quercy.' Alongside the portrait of Sala (attributed to Jean Perréal) and the series of enigmatic miniatures (attributed to the Master of the Chronique scandaleuse), one of the manuscript's most distinctive features is its original wooden carrying case, designed to be suspended from a girdle. The leather covering is carved with devices which include the letters P (for Pierre) and M (for Marguerite), formed out of crossed compasses or staves. We suggest that you read more about the 'Little Book of Love' in this blogpost, and that you view it in full on our Digitised Manuscripts site. 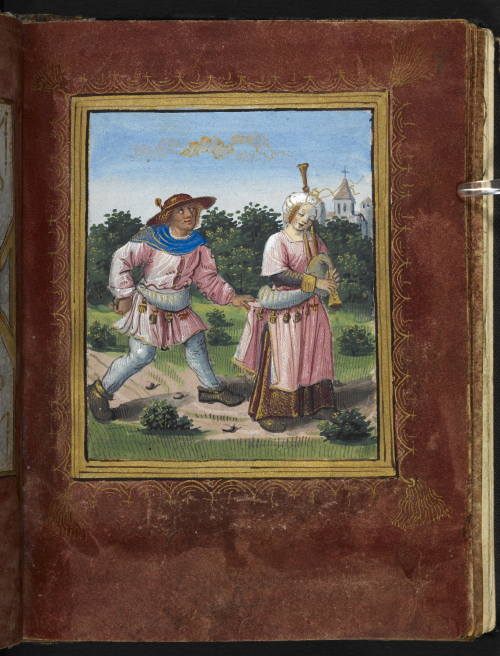 This is a prelude to this weekend's caption competition. As ever, there are no prizes, but we'd love to have your responses to the question, 'What is happening here?' Answers please via the comments box below or on Twitter to @BLMedieval.

Posted by Ancient, Medieval, and Early Modern Manuscripts at 00:01:00

She's got his drone and his chanter. He's left to bellow.

"Sumer Is Icumen In? Sorry, I don't do covers."

A hootin' tootin' hotsy totsy! Gonna tweak her butt and jingle her bells!

“Now, it isn't that I don't like you, Susan. Because, after all, in moments of quiet, I'm strangely drawn toward you. But, well, there haven't been any quiet moments.”