A starry night, the Trojan horse and a spinning top

We have been adding to our Catalogue of Illuminated Manuscripts for over 15 years. This week 25 new manuscripts make their first appearance, each with a selection of spectacular images to view and download. Which are your favourites?

Our nomination among the newcomers, amid very tough competition, is the Breviary of Jean sans Peur (Add MS 35311). We particularly like this miniature of the Virgin and angels, in a jewelled sky above a toy ship in a turquoise sea. John ‘the Fearless’, its owner, was Duke of Burgundy from 1404 until 1419. His Breviary was divided in two; the companion volume is also in our collections (Harley MS 2897). 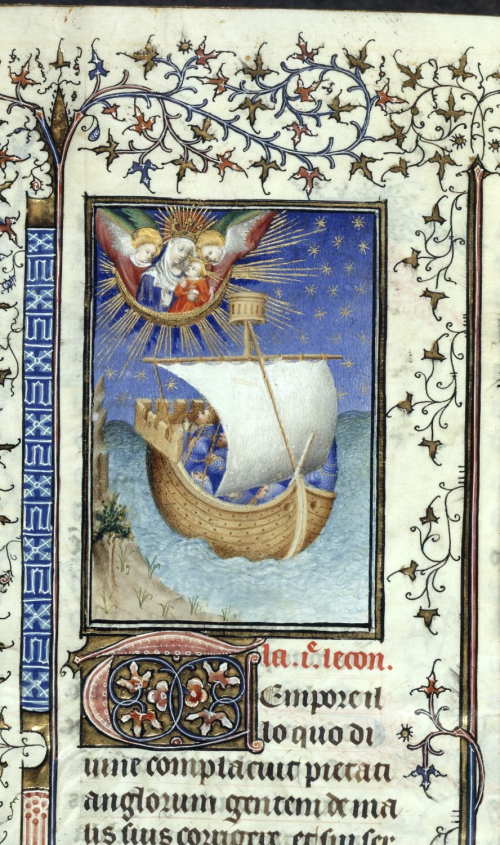 Coming a close second is this version of the Troy legend, by Guido delle Colonne. According to Historia Destructionis Troiae, the Greeks entered the city after the Trojans had demolished part of the wall to allow in the horse. Hiding inside the horse, a certain Sinon gave the signal to the Greek army to enter the city once the Trojans were asleep. 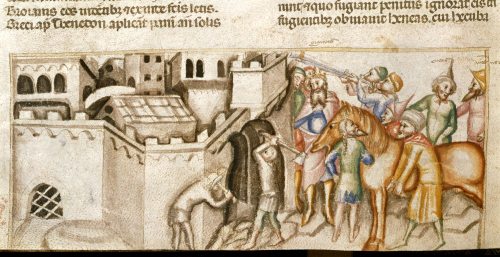 The Trojans breaking the city walls to let in the horse, from the Historia Destructionis Troiae, Venice, 14th century: Add MS 15477, f. 49v

Sibylla von Bondorff was a nun of the Minorite Order of St Clare in the Freiburg area of Germany. She is known to have illustrated at least 4 books, including two in the British Library. A manuscript of the Rule of St Clare illustrated by Sibylla has also been added to the catalogue: Add MS 15686. St Bonaventure is seated at a writing desk, a book open before him and a pen in his hand; divine inspiration aids him, depicted in the form of a dove; a vision of the stigmatised St Francis flanked by angels appears before him, in the Life of St Francis, S.W. Germany, 1478: Add MS 15710, f. 4r

This work of saints’ Lives by Jean Beleth contains 154 legends, each with at least one miniature. It includes a number of Welsh and Breton saints, as well as the Irish St Brendan. St Theophilus and the Devil; on the left, Theophilus surrenders his soul to the Devil in exchange for wealth; on the right the Virgin takes back his deed of surrender from the Devil, from Jean Beleth, Vie des Saints, Paris, 1325–1340: Add MS 17275, f. 29v

The decorated borders of this stunning Book of Hours from Bruges contain a wide variety of identifiable flowers and insects. 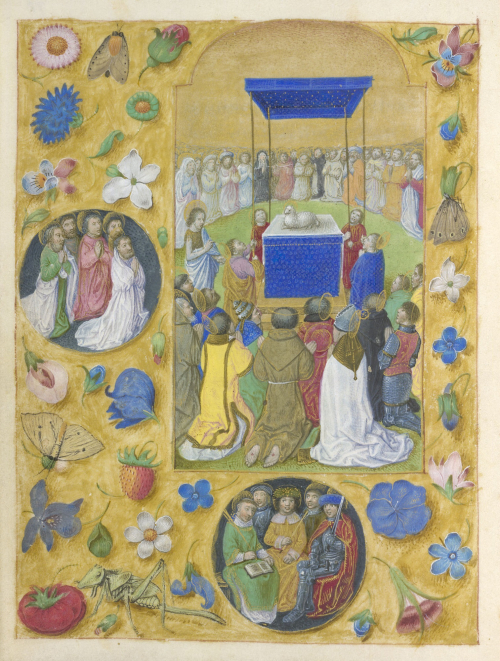 The saints including St Francis adoring the lamb; a scatter border with flowers and a cricket, incorporating two roundels showing kneeling apostles and martyrs, from a Book of Hours, Bruges, 1480–1489: Add MS 17280, f. 77v

This charming domestic scene in a Book of Hours shows the family life of Jesus, with Joseph working in his carpenter’s shop, Mary sewing and the young boy playing with a spinning top. 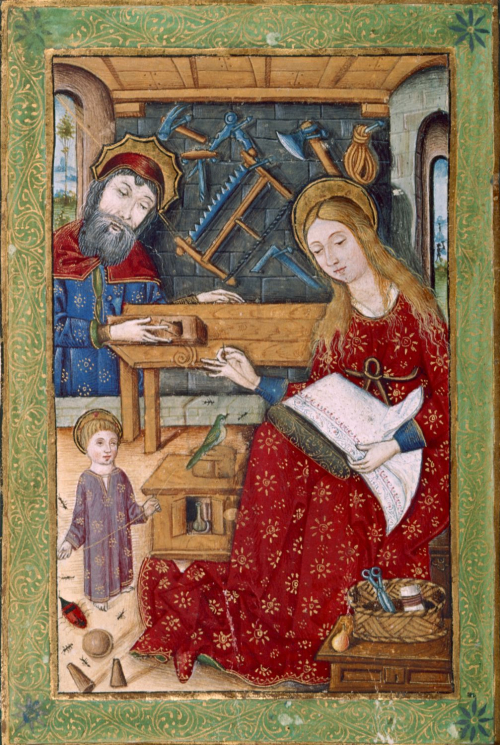 Every page in the ‘London Psalter’ (or ‘Scandinavian Psalter’) has marginalia, with a variety of creatures up to all sorts, including this ape playing a musical instrument. 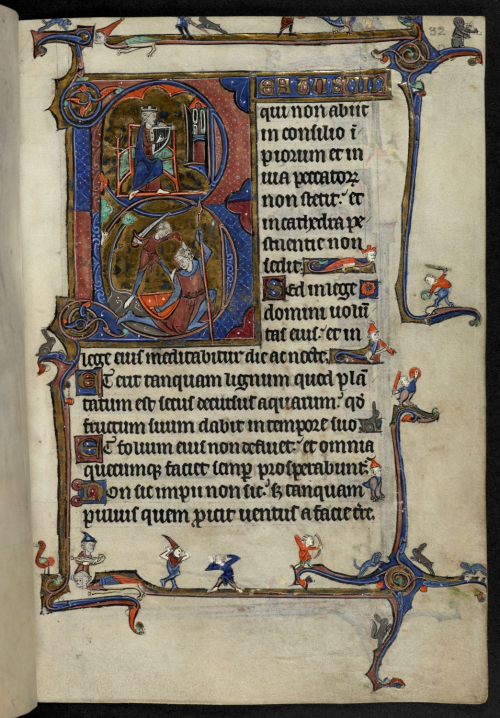 'B'(eatus) initial at the beginning of Psalm 1 with King David playing the harp and cutting off Goliath's head; human, animals and hybrid creatures with swords, bows and musical instruments, from a Psalter, Central France, c. 1255: Add MS 17868, f. 32r

This 10th-century collection of the Lives and Passions of the most important Hispanic saints in the 10th century is thought to have originated at the monastery of San Pedro de Cardeña, near Burgos. 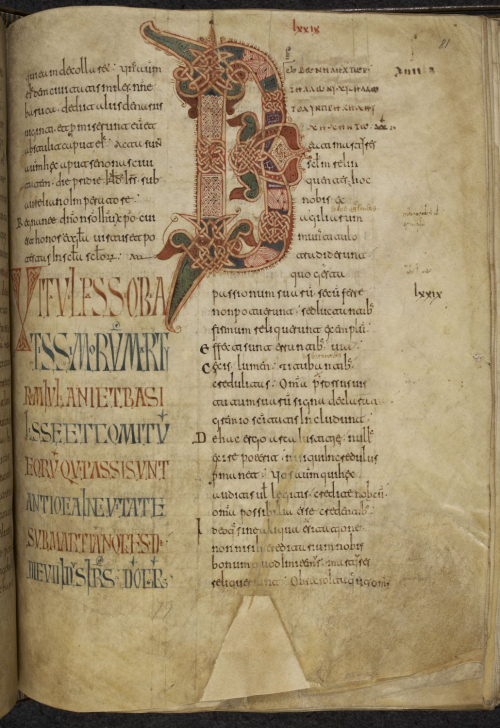 Zoomorphic initial, 'B'(eati), at the beginning of the lives and passion of SS Julianus, Basilissus and companions, from a Passional, Burgos, 919: Add MS 25600, f. 81.

This two-volume set of Gratian's Decretum contains a note in the Catalan language at the end of the second volume (Add MS 15275). 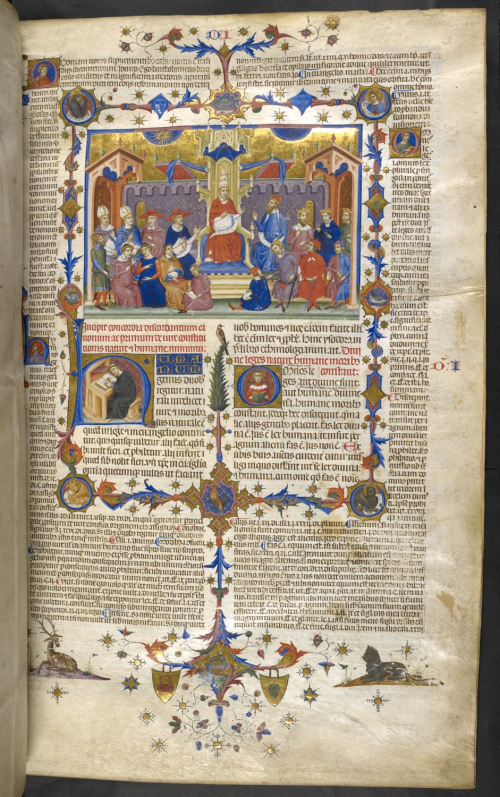 The Pope enthroned, with an assembly including an emperor with an arch-topped crown, three kings or princes, two cardinals and two bishops, with academic clerics in front of them. In the historiated initials are a cleric writing and a figure holding an open book; evangelist symbols, animals and birds in the border, Barcelona, 14th century: Add MS 15274, f. 3r

Here are links to all the manuscripts recently added to the Catalogue of Illuminated Manuscripts. Items marked with an asterisk can also be viewed in full on our Digitised Manuscripts site.

Add MS 15749: Prayers and meditations of Anselm, Augustine and Bernard

Add MS 18855: Book of Hours with leaves from a calendar by Simon Bening*