Today's episode of BBC Radio 4' popular Gardeners' Question Time (repeated on Sunday at 14:00) was recorded here at the British Library.

If you listen carefully, as well as hearing Bob Flowerdew, Anne Swithinbank and James Wong discussing the size of someone's melons, you may catch our curators Julian Harrison and Maddie Smith introducing some of the nation's favourite herbals. Julian showed presenter Matt Biggs pages from the Old English illustrated herbal (Cotton MS Vitellius C III). Sadly, this manuscript was badly damaged by fire in 1731, but Matt and Julian discussed how it contains an important record of early plant lore. Some of the plants it illustrates were not native to early medieval England, indicating that this book was based on earlier texts compiled around the Mediterranean. Matt was fascinated in particular with the accuracy of the drawings: he recognized this depiction of brassica without being able to read the original Old English text. 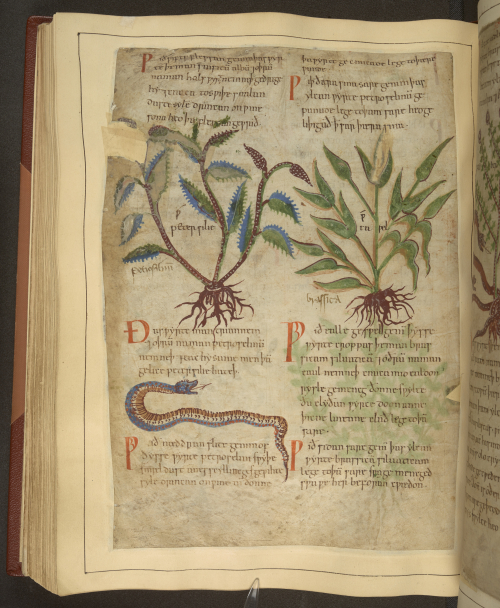 Julian also showed Matt this early 16th-century German herbal (Harley MS 3736), which has a series of idiosyncratic illustrations. You may have come across the manuscript before as it was open (on the mandrake page) in our exhibition Harry Potter: A History of Magic. The page shown here depicts what was once thought to be the Emperor Charlemagne (died 814) kneeling in front of a plant pierced by an arrow. The plant is named 'Carlina' and the caption explains that an angel advised him to eat it in order to be purged of poison. Since the recording, we have realised that the genus 'Carlina' was actually named in honour of Emperor Charles V (reigned 1519–1556), and this helps us to date the manuscript with more accuracy. 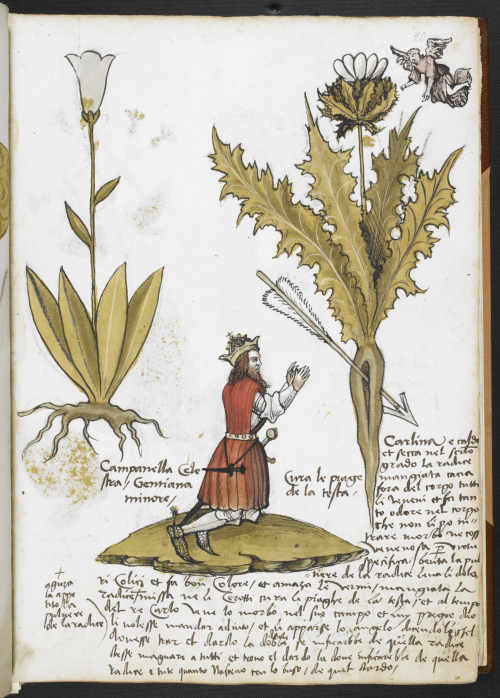