The technique of printing with moveable type was invented in Germany in the decade before Leonardo da Vinci (1452–1519) was born; as he reached his teens the new technology had already spread to Italy, thanks largely to the southwards emigration of German printers. Over the following decades increasing numbers of books were printed in a large number of cities and towns across the Italian peninsula.  With his vast written output — it’s estimated he produced 28,000 pages of writing, of which only about 25% survives today — Leonardo was a significant ‘author’ by any standards, but to what extent was he aware of printing? Did he ever intend to publish the various investigations he undertook throughout his career? Leonardo had an intense interest in machines of all kinds and spent a lot of his time inventing new ones, both on paper and as actual constructions. It seems unlikely that the printing press, one of the dominant new technologies of the time, would have escaped his attention. The two cities where he spent his first fifty years — Florence, where he trained as an artist and embarked on his career, and Milan, where he worked at the Sforza court for nearly two decades — would have given him ample opportunity to visit printing shops and see how they organised their work. A drawing in the Codex Atlanticus shows us his improved version of a printing press, which would in effect have semi-automated the process and meant that only one ‘pressman’, rather than the normal pair, would have been needed to operate the machine. Curiously, there seems to be no reference in any of Leonardo’s work to Gutenberg’s principal invention of moveable type (the printing press itself was merely a variant of a wine or olive press, machines which had been familiar for many centuries). If Leonardo did ever visit a printing house, it is intriguing to speculate what might have run through his mind as he watched compositors setting type line by line exactly as he himself wrote by hand, in ‘mirror script’, going from right to left, and reversing all the letters.

Clearer evidence of Leonardo’s interest in printed books comes from his library. The majority of volumes mentioned in his several surviving lists of the books which belonged to him at various points are printed ones. They are surprisingly eclectic — editions of chivalric romances and other contemporary vernacular literature, translations of Greek and Latin authors, religious texts, scientific treatises and manuals and introductory works on the subjects and topics which interested him or which he felt he needed to master as part of his scientific investigations. They also reflect the widening range of the emergent publishing industry and its markets.

It is not known whether Leonardo ever planned to produce printed editions of his writings on the various subjects on which he intended to write ‘treatises’, such as the ‘Book on Water’ which forms the core of the Codex Leicester recently displayed at the British Library. But there’s no evidence that he wanted to keep them secret. His mirror script, once believed to be a kind of encryption, is now thought simply to reflect the way Leonardo, as a left-hander, found it most comfortable to write. In the more finished notebooks, such as Codex Leicester or many sheets in Codex Arundel, there is a clear attempt on Leonardo’s part to design a clear and readable page layout, with a block of text and a wide margin with drawings and other notes alongside or even keyed into the main content. Within that content, there is often an implied interlocutor or potential/eventual reader in the way he frames his discussion of a topic. It is more probable — and characteristic of Leonardo’s working practices in general — that his notes on various subjects never attained the kind of order and arrangement which would have been necessary if they were ever going to make the transition to published texts.

The spheres of manuscript and print continued to interact in unexpected ways during what can be called the long afterlife of Leonardo’s notebooks. Two items in the last section of the British Library exhibition gave an intriguing glimpse into the continuing complexities of this relationship as far as Leonardo’s writings are concerned, showing how interest in Leonardo’s scientific thinking remained alive over subsequent centuries thanks to various networks of scholars and collectors. Both texts relate to the work of arranging and compiling the notebooks according to subject after Leonardo’s death in 1519, which was started by Francesco Melzi, the pupil to whom he had bequeathed his manuscripts, and continued by other scholars after their dispersal following Melzi’s death in 1570, most significantly in Rome (where many notebooks had ended up) at the beginning of the 17th century. 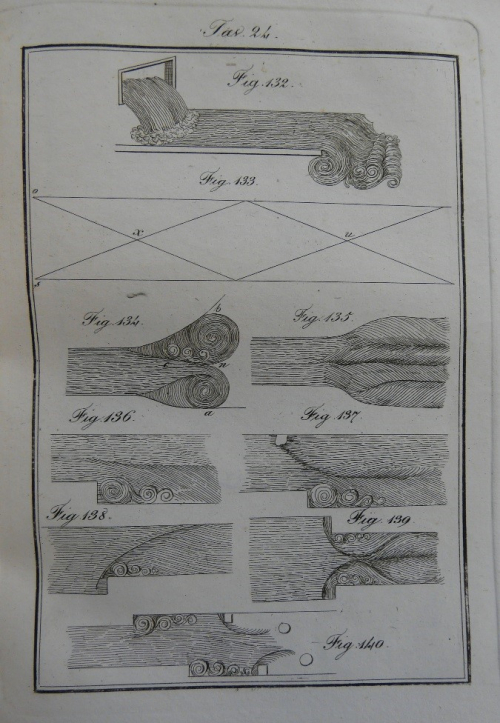 Del Moto e Misura dell’Acqua [‘On the Motion and Measurement of Water’] was published by Francesco Cardinale in Bologna in 1828, over 300 years after Leonardo’s death, as part of a multi-volume collection of works by Italian authors on water. Cardinale worked from a copy of a manuscript which had been compiled in the 1630s for the collection of Cardinal Francesco Barberini (1597–1679), the nephew of Pope Urban VIII, by the Dominican monk Luigi Maria Arconati, whose father owned eleven manuscripts by Leonardo, today in the Biblioteca Ambrosiana in Milan. In arranging his compilation of Leonardo’s notes, Arconati found a model in a recent publication on the subject, Bernardo Castelli’s Della misura dell’Acque correnti, published in Rome in 1628 and dedicated to Urban VIII (Castelli, a Benedictine abbot, is described on the title-page as the Pope’s official mathematician). 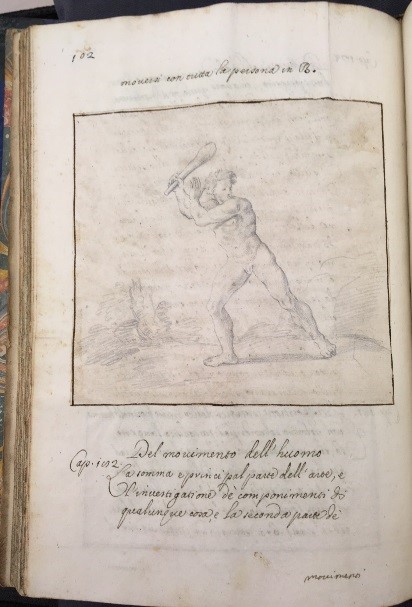 In the case of the second item, King's MS 284, the thread of transmission from Leonardo’s originals is even more complicated. It contains what is perhaps the most important of these posthumous thematic compilations, the Trattato della Pittura or treatise on painting. This work was initiated by Melzi, who, with collaborators, worked systematically through the notebooks in his possession; the resulting text, now Codex Urbinas Latinus 1270 in the Vatican Library, was never completed; but it became the source (although the manuscript itself disappeared from view for over two centuries) for numerous later abbreviated manuscript versions. It is once again in Rome in the 1630s that a new wave of systematic work on the text, following on from Melzi, was undertaken, again drawing on the collection of Arconati’s father, in preparation for the publication of two printed editions, in the Italian original and French translation, in Paris in 1651. The British Library manuscript is a copy of this printed edition together with the illustrations based on Nicolas Poussin’s drawings for the Paris edition.

These complex trajectories from manuscript to print and back again reflect and continue what can be seen as the intrinsic complications of Leonardo’s relationship as a writer to publication and to his readers.