It is unfortunate, but not necessarily surprising, that the earliest surviving topographical map of Scotland should be one designed for invasion. Some of the most accurate maps of pre-modern Europe were made in the context of trade or war, profit or conflict, two operations that required considerable precision. In this particular case, the conflict was the Anglo-Scottish Wars of the 15th century, with the map sitting at the very centre of the long-standing tensions between the two kingdoms. Its maker was a soldier-spy named John Hardyng (1378–1465), who was sent by King Henry V to Scotland on a reconnaissance mission. His primary goal was to collect tactical information about the country in order to plan an attack. 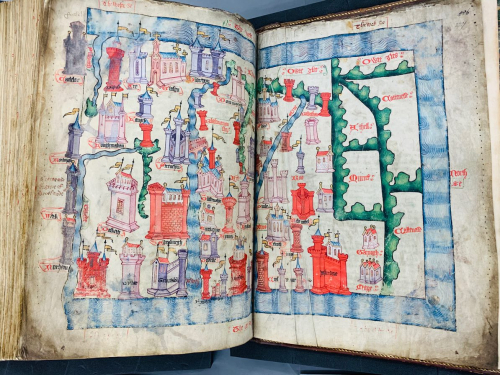 The first version of Hardyng’s chronicle is preserved only in this manuscript, which contains a full-colour map of Scotland; West is at the top: Lansdowne MS 204, ff. 226v–227r.

The outcome of Hardyng’s mission was a chronicle in Middle English verse, completed in 1457. It extended from the mythical foundations of Britain to 1437, and included a detailed map of southern and northern Scotland. There had been other maps which included Scotland, but Hardyng’s were unique. What is remarkable about them is that they focus on Scotland. This might seem insignificant, but in the medieval period it was not at all common to zoom in on a given area. While most other maps show Scotland as the northern part of Britain, Hardyng’s map turned a macro lens on the territory of the Scottish kingdom. 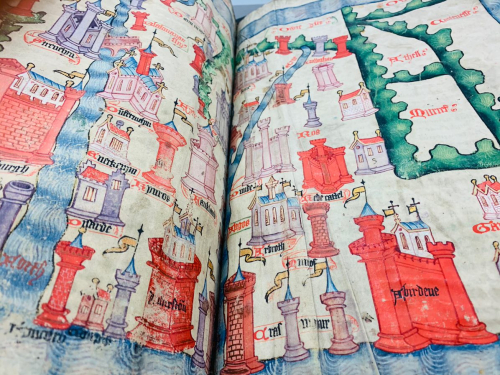 A close-up of the first version of Hardyng's map reveals the amazing detail of his cartographic representation: Lansdowne MS 204, ff. 226v–227r.

Having incorporated the results of his espionage in the chronicle, he presented its first version in turn to Kings Henry VI and Edward IV. Hardyng wanted these maps to provide visual support for the strategic planning outlined in the chronicle. As Sarah Peverley has argued, they are more symbolic than tactical, since they offer information about the general state of the country.

Hardyng’s chronicle survives in two versions, an earlier and a later one, each with its own map of Scotland. The two versions of the chronicle are noticeably different. The later version is shorter, more political, but also more popular and more influential than its predecessor. It was this version that was consulted by Shakespeare and John Milton. 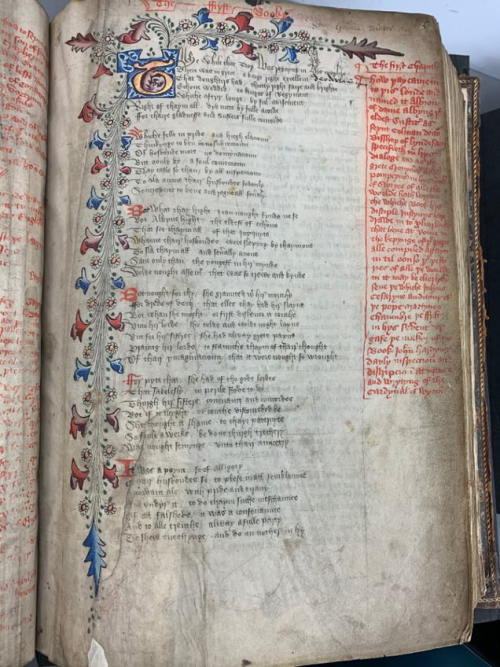 The second version of Hardyng's Chronicle is preserved in 12 manuscripts and traces the history of Britain back to an imagined past: Harley MS 661, f. 1r.

The Scottish map of the second version of the chronicle is more diagrammatic and more intriguing. Like the earlier version, it represents Scottish topography in remarkable detail, with towns, castles, churches and natural features like rivers and marshes. However, it also inter-weaves the text and diagrams in order to explain the significance of many Scottish localities. 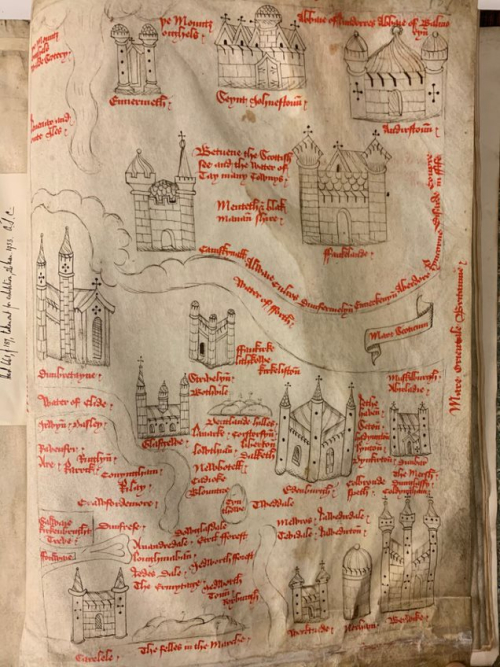 This map shows a high variety of southern Scottish castles, churches, walled cities and other fortifications.

This three-page map includes both southern and northern Scotland. While the southern part is packed with towns and fortifications, the northern parts are represented differently. The region between the mormaerdoms (medieval Scottish counties) of Strathern and Ros, the larger part of the Scottish Highlands, is represented using text and diagrams. The Highlands are referred to as the lands inhabited by the ‘wilde Scottes’. The map depicts the various mormaerdoms as protected by river courses and flanked by two seas, the Mare Orientale (North Sea) and the Mare Occidentale (the Atlantic). For example, ‘the shires of Marre (Mar) and of Carriocth (Carioch) aff this cuntrey stondeth between two waters'. 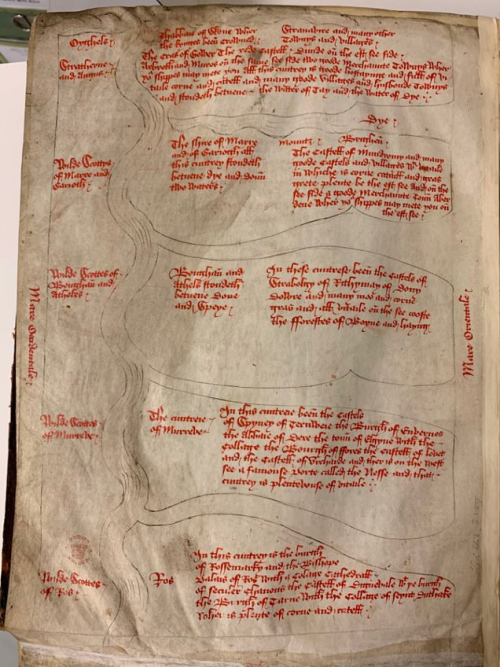 This map of the Highlands of Scotland has South at the top. It provides an overview of the locations of all the major Scottish shires: Harley MS 661, f. 187v.

But there is something rotten in the North of Scotland. At the far end of Britain, beyond the Orkney Islands, Hardyng located Satan’s infernal abode, the palace of doom. According to the English spy-soldier, the more one moved away from England, the more savage and devilish the inhabitants became, culminating in the source of all evil, at the ends of the Earth, under Scotland’s (and Satan’s) dominion. 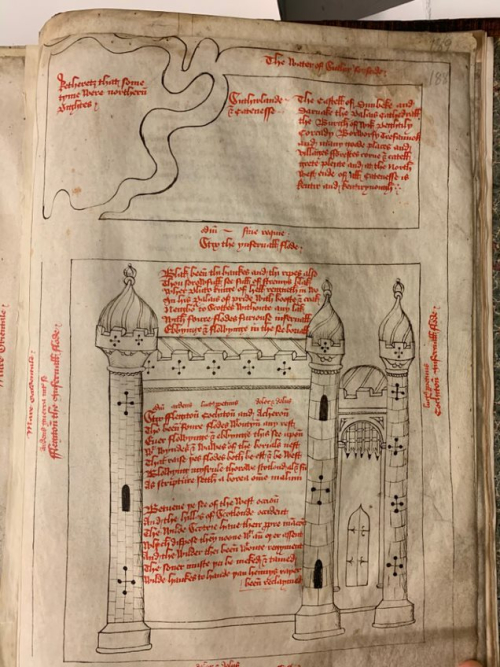 This diagram of Northern Scotland explains that 'the wilde Scotrie have their propre mancion' in Pluto (or Satan's) palace: Harley MS 661, f. 188r.

Surrounded by the four infernal rivers (Styx, Phlegethon, Cocytus and Acheron), Satan’s diagrammatic seat of power was a metaphor for Hardyng’s view that the 'wickedness' of the Scots was attributable to Satanic influence.

If you would like to read more about Hardyng’s Chronicle, we would highly recommend these by Sarah Peverley: