The art of the alphabet poem

On International Literacy Day (8 September), we look at how medieval and early modern scribes and artists celebrated the Latin alphabet through art and poetry. Decorated alphabets were central to medieval ‘alphabet books’. These are ‘pattern books’ that feature alphabets written or drawn in different fonts and featuring various styles of decoration. Their purpose is debated, but one explanation is that artists used them for promoting their skills among potential clients, or for recording interesting designs they found in other manuscripts. For example, the 'Macclesfield Alphabet Book' (Add MS 88887) ─ one of two surviving English alphabet books (the other one is Sloane MS 1448A) ─ contains fourteen different types of decorative alphabets. 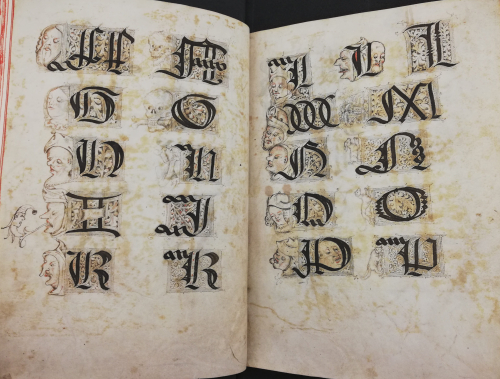 Similar alphabets were known to or designed by the German artist and scribe Johann Holtman, who produced an alphabet book (Add MS 31845) in 1529. 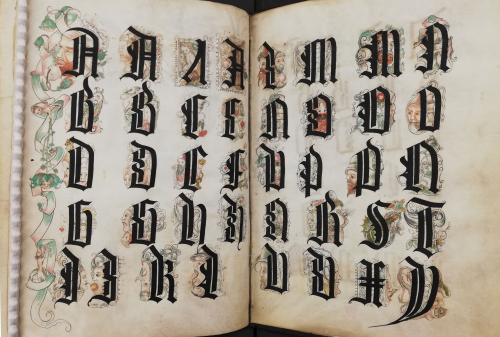 Decorated alphabets could also be combined with poetry. The ‘abecedarium’, a poem in which the first letters of each line or stanza together form the letters of the alphabet, was a form often used by medieval poets. Geoffrey Chaucer, the most renowned medieval English poet, himself wrote an ‘ABC hymn to the Virgin’ (see Harley MS 2251). Early modern artist-scribes also used this form, but put more emphasis on the alphabet poem’s visual display. First of all, they drew their initials at an enormous size, dedicating an entire page to each initial. Secondly, they decorated them extravagantly using a great variety of patterns and figures. Another distinct feature of their poems is that they are unique: only originals – no copies – survive. One example is a 16th-century Dutch alphabet poem (Add MS 24898): 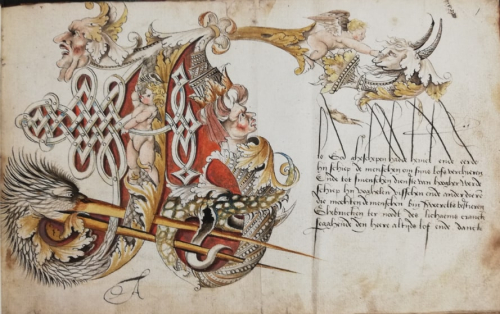 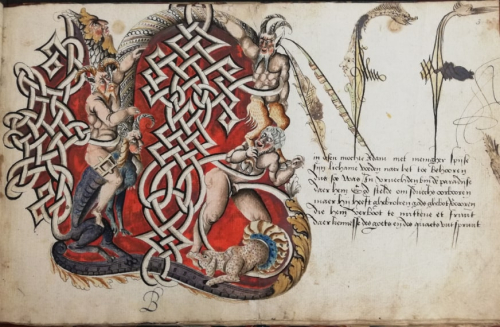 The initials reflect the poem’s religious themes. For example, its often-repeated motif of a stork eating a snake draws its meaning from medieval bestiaries. These use the stork’s enmity towards the snake as an example for the righteous who, likewise, should be the enemies of evil thoughts (‘snakes’). The poem was created by an artist-scribe who identifies himself on the page that is dedicated to the letter ‘D’. In the initial, he inscribed his name (‘Marcus van Yperen’) with the date 25 August 1560 in a banderole that is suitably wrapped around two quills and a quill knife. 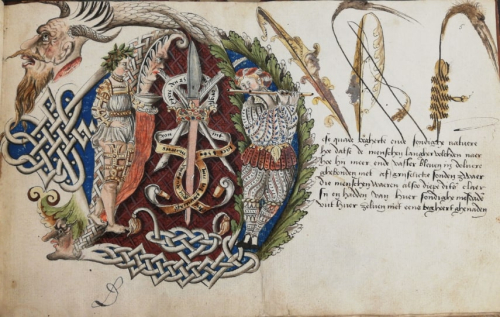 Another alphabet poem entitled Pennarum Nitor or The Pens Excellency (Add MS 36991) was created by Joseph Lawson in 1608. Here, each page presents two versions of the same letter of the alphabet, each with its own ‘poem’. The upper one is decorated in the style of a medieval manuscript, whereas the lower one is in a typographical style. The texts on these pages have no apparent connection with one another. For example, the two texts for the letter ‘A’ are legal and religious:

‘All men shall knowe by these presentes that I Robert Watersonne of ffelmingham in the Countie of Norffolk am indebted and doe owe unto L. Maine […]’.

‘A man of might if that thou bee give not thy minde I say unto a whore of no degree marke this I doe thee pray, for in the scripture thou shalt read if that thou marke it well the whordome is the ready way to lead the into hell’. 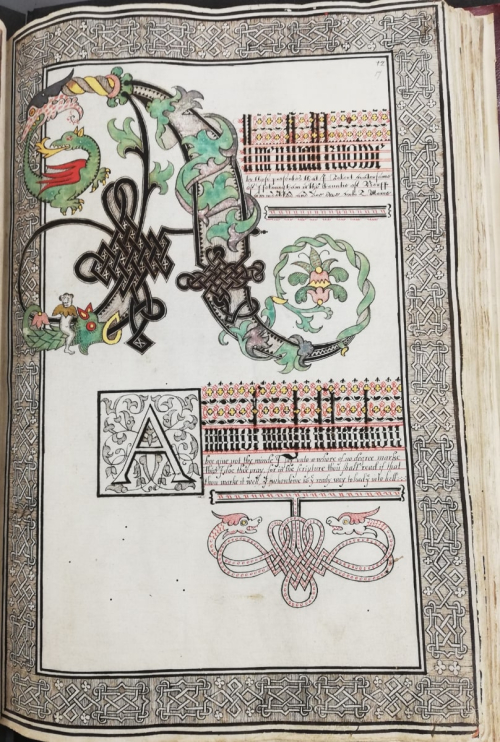 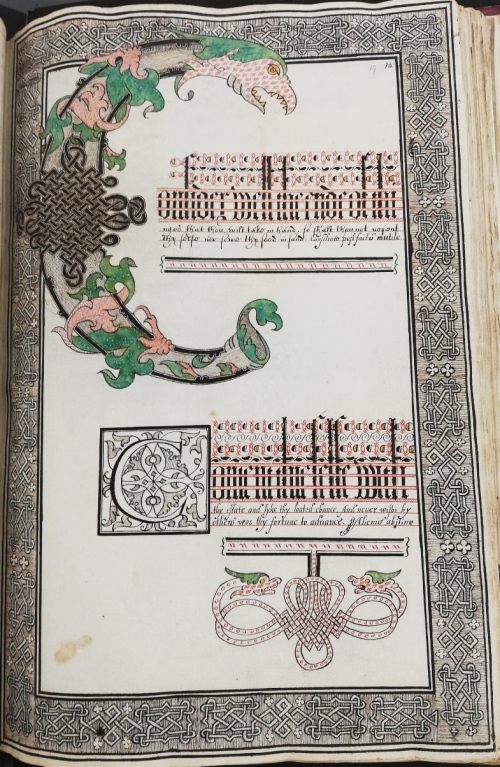 A final example of a decorated alphabet poem comes from a mid 17th-century English manuscript (Harley MS 1704). The artist-scribe may have created it for a ‘Robert Clare’ of Uttoxeter in Staffordshire: the latter’s name features in the ‘poem’ — which is more like a draft for a legal document — for the letter ‘B’. The manuscript also features inscriptions by Robert Clare himself, indicating that he came to own the poem after it was finished. The first one begins:

‘All men are wormes, but this no man in silk / twas brought to taugt first wrapt and white as milk / where afterwards it grew a butterfli which was a caterpiller [...]’. 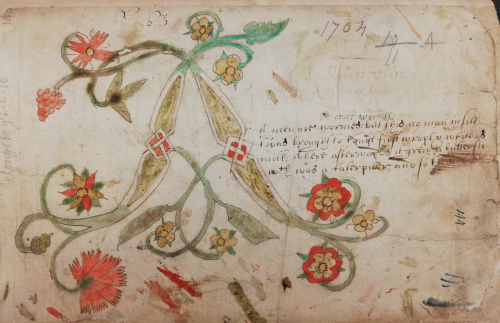 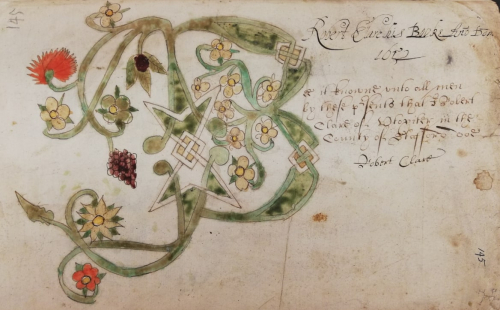 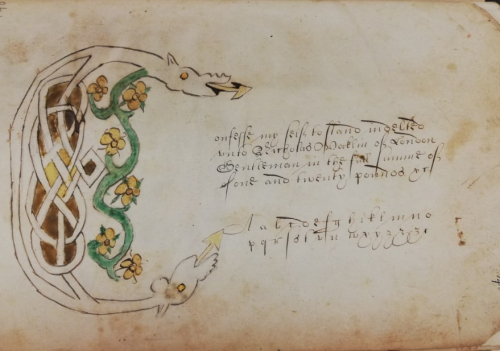 Medieval alphabet books and early modern alphabet poems may have fulfilled a similar purpose. Christopher de Hamel has suggested that alphabet books may not be practical books created by artists for their own use after all. Perhaps, he argues, they represent a way of analysing and visually displaying the world that is inherent to the ‘genre’ of alphabet books. Likewise, decorated alphabet poems encapsulate various aspects of the world, covering, for example, literary, religious, and legal subjects. Their initials reflect this in the multitude of human figures, animals and hybrid figures that inhabit them.