Drawing a blank: an attempt to save the life of Charles I?

Leafing through Harley MS 6988, it would be easy to flick past an unobtrusive empty page towards the end of the manuscript. Upon closer inspection, however, this ‘blank’ may be one of the central documents of the trial and execution of King Charles I in 1649.

Harley MS 6988 contains royal letters and warrants from between 1625 and 1655, chronicling the reign of King Charles I from his accession to his execution for treason, along with the development of the Civil War. Although one page towards the end of the manuscript is empty, this ‘blank’ is nevertheless as revealing as it is enigmatic.

On the right-hand side is the signature ‘Charles P’, while the left bears the Prince’s seal. In the hand of William Oldys (1696–1761), a previous owner of the document, is written: ‘Prince Charles his Carte Blanche to the Parliament to save his Father’s Head 1648’. A carte blanche is a blank paper on which a recipient can write their own conditions, essentially a pre-signed offer of full discretionary power. 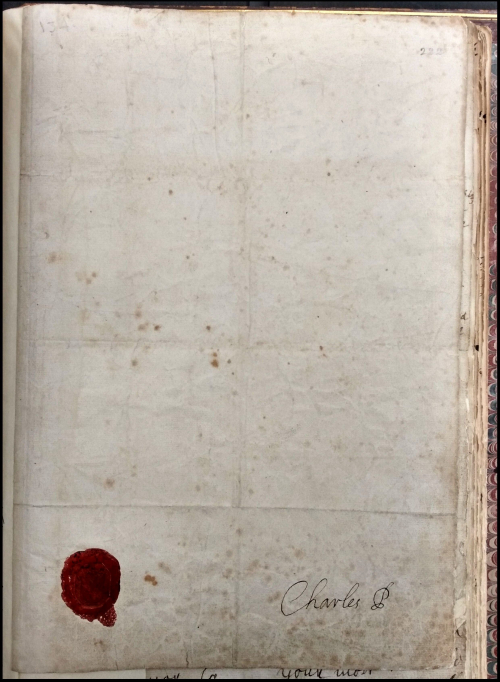 Is this empty sheet a carte blanche sent by Prince Charles (the future King Charles II) to Parliament as a last-ditch offer in exchange for his father’s life?

The question has been discussed in an article by T.C. Skeat, who notes that several early historians thought it probable that the paper was genuine: according to an account in the 1663 book Flagellum: or the Life and Death, Birth and Burial of Oliver Cromwell, ‘a Blank with the Kings Signet, and another of the Princes’ was given to Colonel John Cromwell, ‘for [Oliver] Cromwell to write his own conditions in, if he would now preserve the life of the King’.

In 1766 the story was linked to the blank pages of Harley MS 6988, when William Harris wrote in his biography of Charles II that, ‘I know there is in the British Museum a blank paper, at the bottom of which, on the right hand, is written Charles P. and on the left, opposite thereunto, a seal is affixed’.

However, it is questionable whether Prince Charles would have made such an offer on the eve of his father’s execution. Letters from the King to his son had instructed against any concessions on religion. Earlier in Harley MS 6988, King Charles I wrote to the Prince, ‘I command you to do nothing, whether it concerns war or peace, but with the advice of your council, and that you be constant to those grounds of religion and honour, which heretofore I have given you’ (f. 208r). 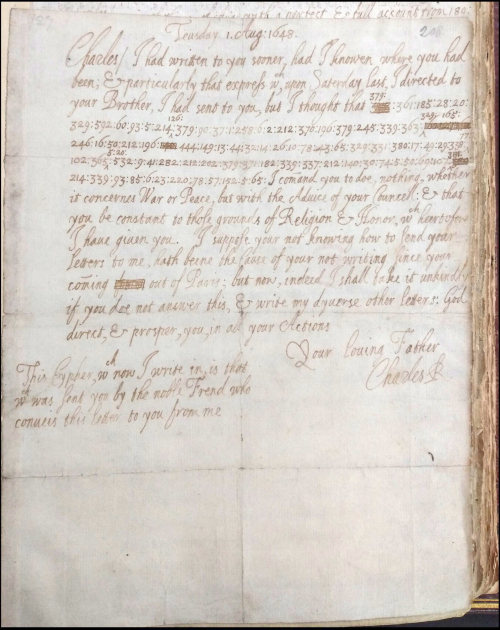 The King instructs his son to be constant in religion and honour: Harley MS 6988, f. 208r

On the other hand, as Skeat noted, the offer of a carte blanche was a familiar strategy during the period. Soon after the King’s execution, James, 1st Duke of Hamilton, was also sentenced to death for treason. His family protested, but Parliament refused to ‘hearken to the Earl of Denbigh, who proposed, on behalf of Duke Hamilton his brother-in-law, to give them a blank signed by the said Duke, to answer faithfully to such questions as should be there inserted’.

Royal figures are also found appending their signatures and seals to documents containing blank spaces to be filled in later, such as the 1601 licence in the Folger Shakespeare Library (MS X.d.70) signed by King James I, and the c. 1648 bond signed by Prince Charles now in the National Archives (SP 16/516 f. 225).

Although the empty page in Harley MS 6988 may have been ‘intentionally left blank’ by Prince Charles, it is not certain whether it was indeed a carte blanche intended to ‘save his Father’s Head’. Skeat concluded that the story was genuine, writing that ‘it seems almost perverse to refuse to accept the Carte Blanche as the very document with which the Prince of Wales sought to preserve his father’s life’. Despite uncertainties around its original purpose, the surviving leaf in Harley MS 6988 is a tantalising witness to a tempestuous historical moment, as well as a reminder of the potential of the blank page.