It is unfortunate that most books made in the West in the medieval period have not survived. In England, for instance, only about 90 missals (books containing the order of the Mass) have survived, out of an estimated 40,000 extant around the beginning of the 15th century. The situation is far worse for less prominent books, such as manuscripts of classical, scientific, medical and grammatical works. More manuscripts were undoubtedly lost in the early modern and modern periods than in the course of the Middle Ages.

Today, some medieval manuscripts survive only in fragmentary form. Modern libraries have a duty to preserve both complete manuscripts and the fragments of other books that have been partially lost.

One of the lesser-known collections of manuscript fragments at the British Library is that of John Bagford (1650/1–1716), now part of the Harley collection. John Bagford was a London shoemaker turned bibliophile and bookseller. A friend of the leading antiquarians of his time, he is known today mostly as a collector of Restoration-period ballads. You can read more about his career in the Oxford Dictionary of National Biography entry (subscription only) and in the blogpost ‘A Man of very surprising Genius’.

The Bagford collection includes nearly 300 manuscript fragments collected in six volumes, ranging from modest vellum scraps to full-size parchment and paper leaves. Bagford collected the fragments indiscriminately and did not arrange them in a specific order, with the sole exception of Harley MS 5958, which contains mainly fragments of musical manuscripts. 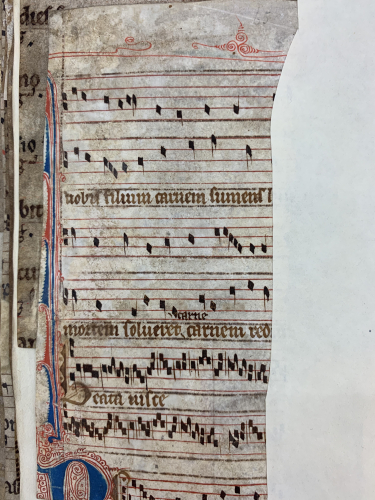 Originally, Bagford’s collection also included fragments of early printed books, but these were removed from the original volumes at the British Museum and are preserved separately. His scrapbooks contain fragments from a large variety of manuscripts dating from the 8th century down to the end of the Middle Ages. While fragments of musical, liturgical and biblical manuscripts are the most numerous, there is also a large number of fragments of patristic, scientific, classical, grammatical and legal texts. 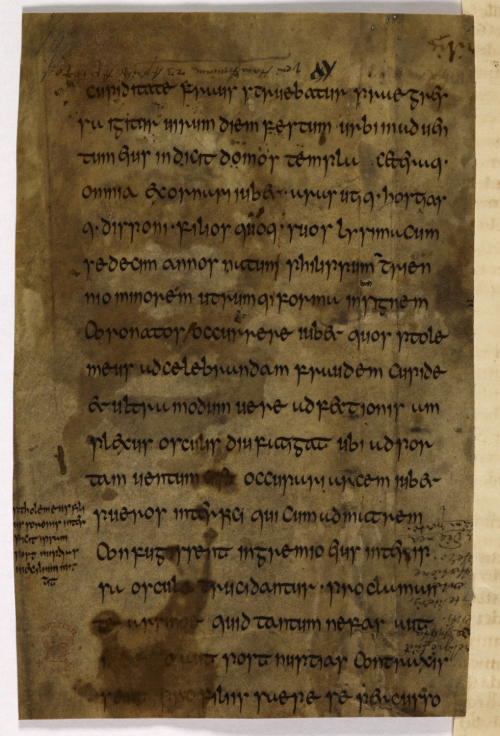 Several fragments are from illuminated manuscripts, but it appears Bagford collected every sort he could find, no matter how humble. 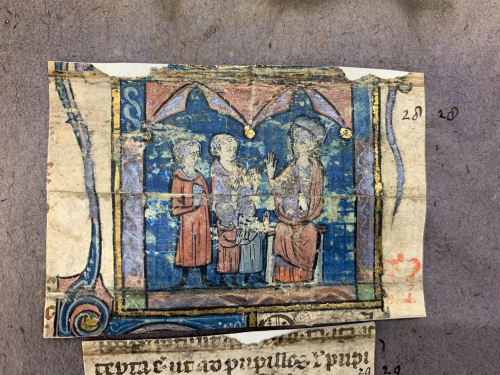 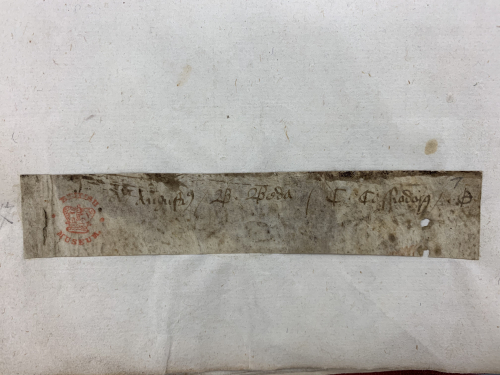 This fragment contains some form of reference system for patristic books (A for Augustine, B for Beda, C for Cassiodorus): Harley MS 5915, f. 7

Collecting fragments has always been controversial. It is one thing to acquire and gather loose leaves and floating scraps, quite another to make cut-outs from other manuscripts, defacing, mutilating and even destroying other items in pursuit of enlarging one’s collection. Bagford’s fragments come from a variety of sources, the provenance of most of which is untraceable.

Many fragments of medieval manuscripts considered dispensable were used since the beginning of print to reinforce the bindings of printed books. Small scraps were pasted on book spines, larger ones were used as pastedowns (paper or parchment pasted on the inner covers) or endleaves. Recycling medieval manuscripts was already common in the Middle Ages, when discarded older books were used for binding new ones. Often, an old manuscript parchment leaf would be used as covers for a newer volume.

A fragment from a manuscript containing the hugely popular 12th-century retelling of the Trojan War by Joseph of Exeter (died 1210) reveals its bookbinding afterlife. A residue of adhesive on the back indicates that this fragment was sourced from a binding where it was used as a pastedown. 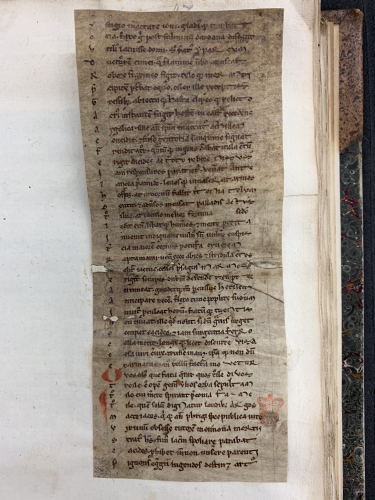 This fragment was once part of a manuscript containing Joseph of Exeter's De Bello Troiano: Harley MS 5977, f. 87r 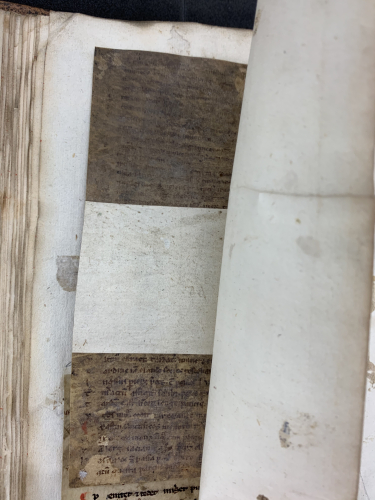 An unexamined fragment of the 12th-century play Geta was similarly used as a pastedown. This fragment is a bifolium (a sheet folded in half to produce two leaves), later incorporated into a manuscript more than twice its size. 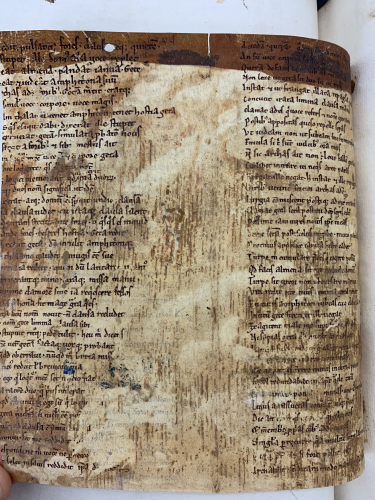 This fragment used to be folded in half. The holes for the binder’s stitching of cords are still visible, as is the folding line, slightly ripped at the top. The poor surface quality is due to it having been pasted, presumably, onto the lower board of another book: Harley MS 5977, f. 88

Bagford was accused by some 19th-century bibliographers of biblioclasm, meaning ‘the destruction of books’, a capital crime among booklovers. A ‘wicked old biblioclast’ (according to William Blades), ‘the most hungry and rapacious of all book and print collectors’ (T.F. Dibdin), Bagford's book-collecting activities remain a mystery. One must wonder how Bagford, a Londoner, acquired a loose leaf of astronomical tables for use in London, or a multitude of cut-out illuminations from manuscripts no longer extant. 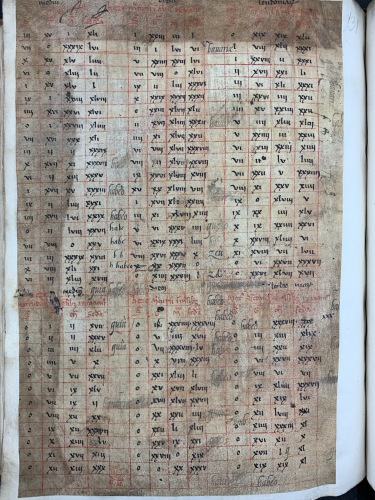 A leaf from a 13th-century scientific manuscript containing a table for the calculation of the meridian in London: Harley MS 5977, f. 131

Confronted with the low survival rates for books written before the Reformation, book historians often have to be content with the (vellum) scraps under the master’s table, regardless of whether the scraps were used in binding newer books or deliberately removed from a discarded manuscript. A manuscript scrap in hand is worth two in the dustbin of history. And so we are grateful today for Bagford’s zeal, which provides us with distant echoes of voices forever lost. 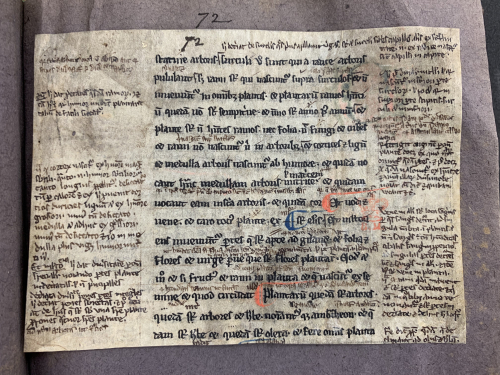