Medieval saints as protectors of animals

St Francis of Assisi (1181/82–1225) is traditionally known as the patron saint of animals and the natural environment. During the Middle Ages, however, other saints were sometimes associated with protecting animals, particularly in magical texts or ‘charms’.

One such charm is found in an 11th-century Psalter from Winchester (Cotton MS Vitellius E XVIII), recently digitised as part of The Polonsky England and France Project. This manuscript features a number of magical remedies for healing animals, written in Old English. The book also contains instructions for making a magical device known as 'St Columcille’s Circle', used to protect bees and keep them in a bee-enclosure (‘apiary’) when they were swarming. The text advised that you should use the point of a knife to draw a circle on a malmstone, and to inscribe Roman numerals and a Latin text inside the circle: ‘contra apes ut salui sint et in corda eorum scribam hanc’ (‘[This circle is] in case of a swarm of bees so that they may be safe, and in their hearts I will write my law’). One should then drive a stake into the ground at the centre of the apiary, and place the stone on top of the stake, so that the stone disappeared into the ground while its surface with the magical circle remained visible. You can read more about this in Martha Dana Rust's article, 'The Art of Beekeeping Meets the Arts of Grammar: A Gloss of "Columcille's Circle"', Philological Quarterly, 78 (1999), 359–87. 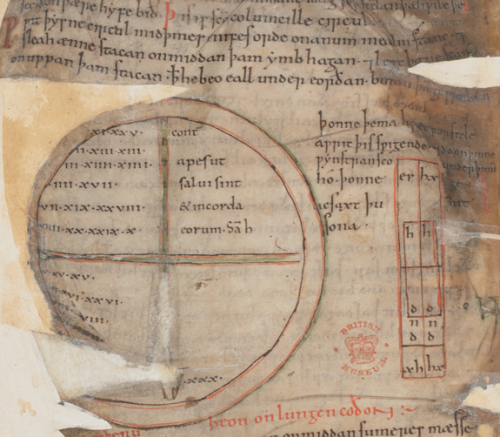 It is not clear why the charm associates St Columcille (521–597), also known as Columba — one of Ireland’s three patron saints — with the protection of bees. Martha Dana Rust has suggested that the author of 'St Columcille’s Circle' may have been influenced by the Ecclesiastical History of the English People written by Bede (673/4–735). Bede interpreted the name ‘Columcille’ as a compound of the name Columba and the Latin cella (‘cell’), which could refer both to the monastic cell or the wax cell of a honeycomb. For example, in one 12th-century English bestiary, Add MS 11283, it is noted that bees use flowers to create ‘small and rounded cells’ ('minutae atque rotundae cellulae'). 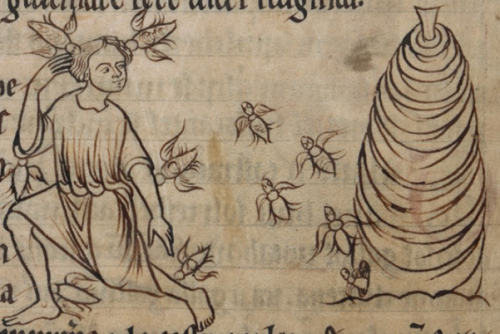 Another saint associated with the protection of animals is named in a 12th-century scientific and magical manuscript from southern France (Egerton MS 821). This collection contains various charms for healing cattle, including a charm for protecting an animal that invokes a certain ‘St Silvanus’. The text includes prayers to Christ and the Virgin Mary for support, but also instructs the reader to give three sticks to three men, and then say to them: ‘I appeal to you, [?named] men, that you should defend this animal from thieves or malign animals’ (‘apello homines nom[?ine] ut cum baculos defendatis hanc bestia a latronibus vel a malis bestiis’). Finally, the reader was instructed to invoke St Silvanus himself to protect the animal in question from thieves, dangerous animals and all ‘evil things’ (‘malos omnes’). 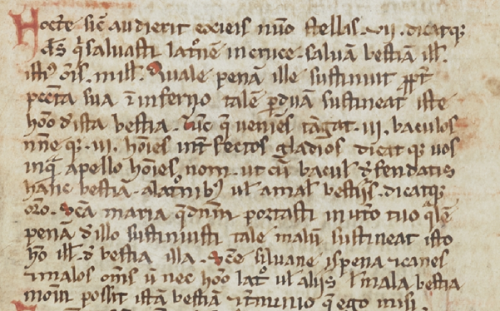 The Silvanus who is invoked in the charm has not been identified. He may represent a Christianised version of the Roman wood deity, Silvanus, who was venerated as a protector of animals and a patron of shepherds and their herds in the pre-Christian Roman Empire. The cult of Silvanus may have been recast into Christian form by missionaries during the Middle Ages, while retaining aspects of its pre-Christian identity. (You can read more about this in Peter F. Dorcey's book, The Cult of Silvanus: A Study of Roman Folk Religion (Leiden: Brill, 1992)). It is possible that Silvanus, whose cult flourished particularly in southern France, continued to be invoked as a protector of animals during the Middle Ages alongside other saints who were closely linked with the natural world.

We have digitised 800 manuscripts dating from pre-1200, in partnership with the Bibliothèque nationale de France. You can see some of the highlights on this dedicated webspace, including articles, videos and links to all the manuscripts in the project.