The Lindisfarne Gospels: Turning over a new leaf

Fans of the Lindisfarne Gospels will be excited to hear that we have just turned the page, so you can now see a new opening on display in the British Library's Treasures Gallery. This time we are showing some of the manuscript's text pages, ff. 82v-83r, which contain the account of Christ’s arrest in the Gospel of St Matthew (Matthew 26:39-55). 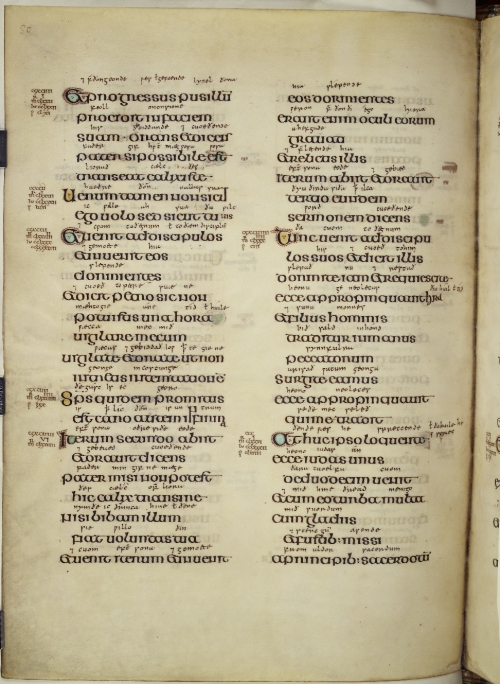 These pages showcase the Lindisfarne Gospels’ stately script, one of the finest surviving examples of the formal calligraphy used for high status books in England and Ireland in the 7th-9th centuries. This script, known as Insular half-uncial, first developed in Ireland and is shared with masterpieces of Irish book art such as the Book of Durrow and Book of Kells. Insular half-uncial is a large, round, imposing script that could only be written by highly trained scribes. They had to work slowly and meticulously, holding the pen vertically and paying attention to details such as serifs and head strokes.

According to a colophon written in the 10th century, the Lindisfarne Gospels was created by Eadfrith, bishop of Lindisfarne from 698 to 721. The monastery of Lindisfarne was founded around 634 by the Irish missionary St Aidan, who brought to Northumbria the traditions of Irish monasticism and book production. After the Synod of Whitby in 664, Northumbria officially declared allegiance to the Roman Church, but the Irish missionaries left an enduring legacy in the script of manuscripts such as the Lindisfarne Gospels. 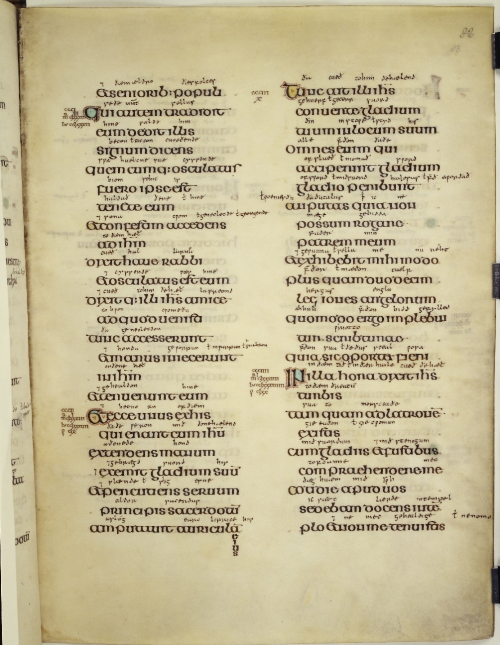 The pages on display also give you the chance to admire the manuscript's ground-breaking Old English translation. Aldred, the 10th-century priest who wrote the colophon, also added an Old English translation above the words of the Latin text, providing the oldest known translation of the Gospels into English. Look carefully at these pages and you might see some words that you recognise. For example, on the second line of the second column on f. 83r, the Latin word 'gladium' is translated as 'suord' (modern English, sword). Or on the fifth-from-last line of the first column on f. 82v, the Latin word 'pater' is translated as 'fader' (modern English, father).

Come and see the Lindisfarne Gospels and other spectacular manuscripts from our collection for free in the British Library’s Treasures Gallery or explore them online on our Digitised Manuscripts website.