In the late medieval and early modern eras, heraldic collections often contained, alongside contemporary examples, the imaginary coats of arms of men from medieval romance and legend or of kings who lived before the age of heraldry. Prominent among these attributed coats of arms were those of the so-called ‘Nine Worthies’ (Les Neuf Preux), a group of three pagan (Classical), three Jewish, and three Christian leaders first described in the early 14th-century French poem Les Voeux du Paon by Jacques du Languon (found, for example, in Harley MS 3992). The Nine Worthies personified the ideals of chivalry and military excellence. At the beginning of one late 15th-century book of heraldry (Harley MS 2169), they were introduced as ‘The IX Worthy Conqwerourys’, and were identified (from left to right) as Hector of Troy, Alexander the Great and Julius Caesar; David, Joshua and Judas Maccabeus; and King Arthur, Charlemagne and Godfrey of Bouillon (one of the leaders of the First Crusade). 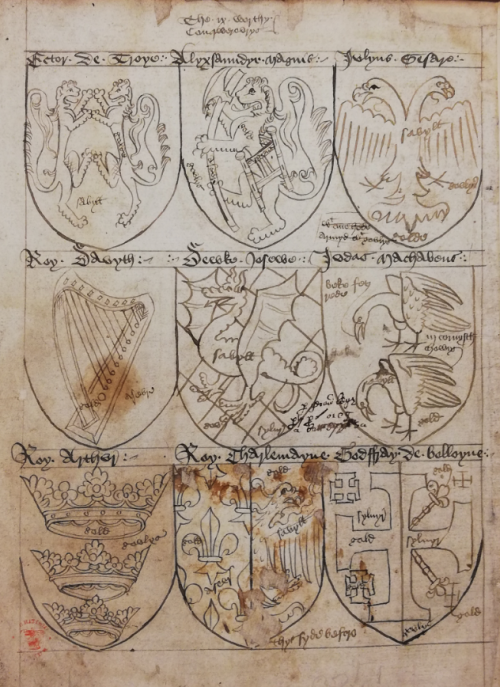 In the late 14th century, a group of female worthies joined their male counterparts. The Nine Worthy Women (Les Neuf Preuses) consisted of queens and female leaders who were also associated with military prowess. This grouping was much less fixed than that of the male worthies. For instance, the majority of the Nine Worthy Women who were part of the pageant for the coronation of King Henry VI at Paris in 1431 were queens of the Amazons, a tribe of warrior women from Greek mythology who, according to medieval sources such as the legendary travel memoir of John Mandeville, governed the land of Amozoyne where ‘dwellyth no man’. Other versions included female British leaders such as Boudica, queen of the Iceni (a British Celtic tribe), who led an uprising against Roman occupying forces; Æthelflæd, daughter of King Alfred, who fought off various Viking attacks; and Margaret of York, wife of King Henry VI, who led the Lancastrians in battle against Edward IV. 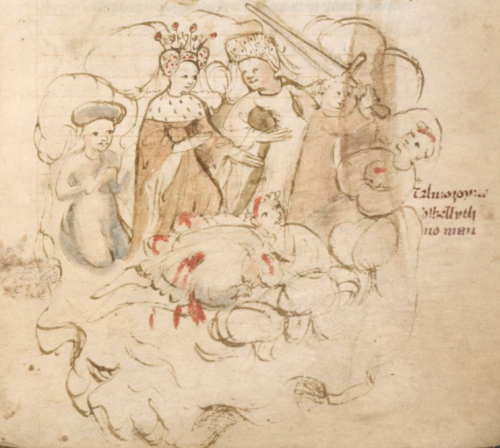 Another version of the Nine Worthy Women features at the beginning of Harley MS 6090, a late 16th- or early 17th-century English heraldic collection. In that manuscript the three Classical queens and female leaders are: Minerva, the Roman goddess of war, whose arms feature the ‘Aegis’ (a shield with the head of the gorgon Medusa) of her Greek equivalent Athena; Semiramis, a mythical queen of Babylon; and Tomyris, a legendary ruler of the Massagetae, who defeated Cyrus the Great. 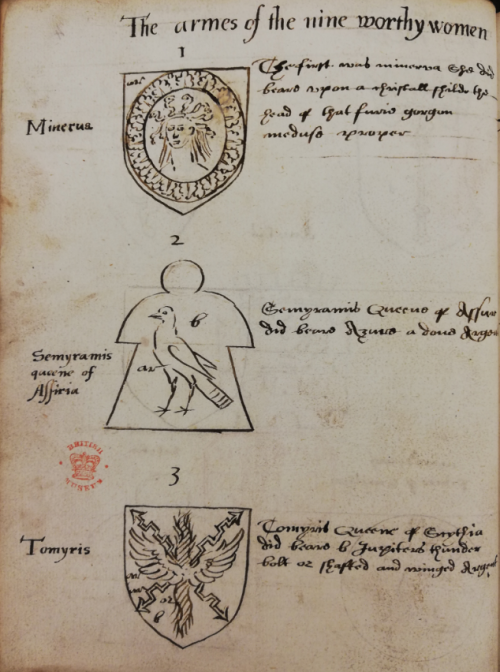 The three Jewish queens and female leaders are Deborah, a prophetess and judge of the Israelites; Jael, who killed the commander of an enemy Canaanite army by hammering a tent peg (of which six are displayed on her arms) into his temple; and Judith, who decapitated Holofernes (his head is displayed on her arms), the leader of an Assyrian army that occupied Israel. 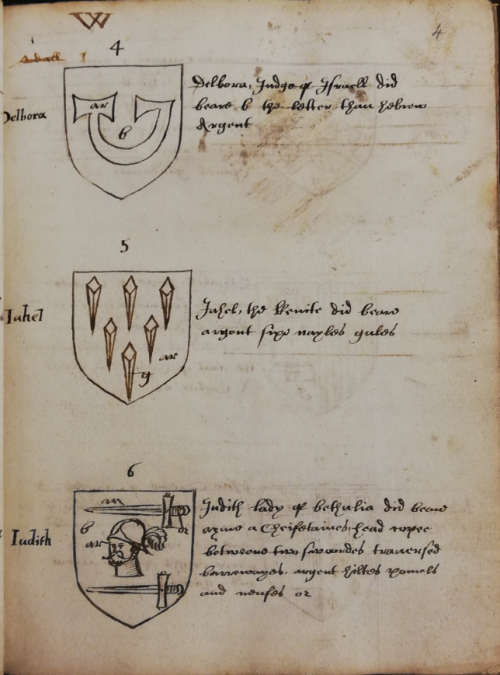 The three Christian queens and female leaders are Empress Matilda (1102–1167), daughter of King Henry I, who initiated a war against her cousin, Stephen of Blois, after he usurped the throne; Isabel I of Castile [also known as Elizabeth I of Spain] (1451–1504), under whose rule Spain was united and the Emirate of Granada conquered; and Joanna II (1371–1435), Queen of Naples, who managed to re-establish herself as Queen after she had been imprisoned by her husband, James of Bourbon. 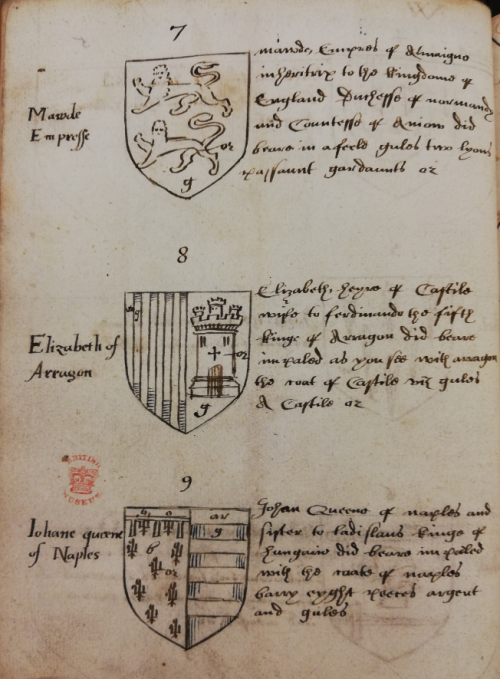 The arms of the Nine Worthy Women in Harley MS 6090 were most likely copied from John Ferne’s The Blazon of Gentrie, first printed in 1586. Their audience would have been familiar with these women through contemporary and medieval works that praised their achievements, such as De Mulieribus Claris (About Famous Women) by Giovanni Boccaccio (as in Harley MS 4923) and the works of Christine de Pizan (for example, Harley MS 4431). 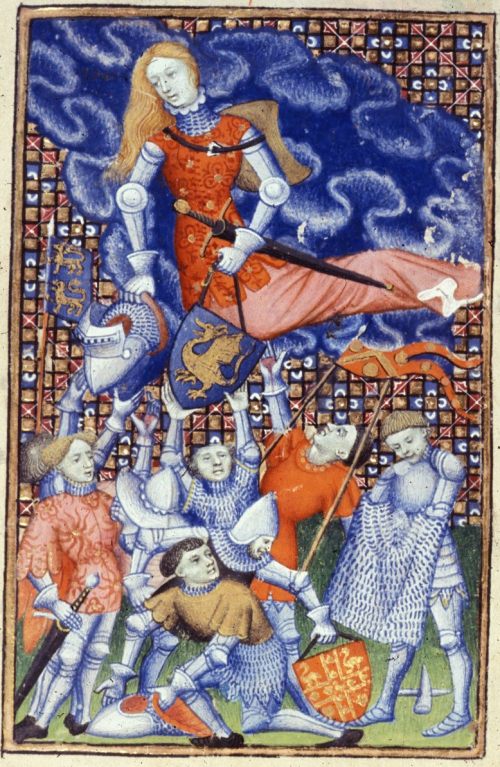 Why are the female worthies so prominent in Harley MS 6090, while the male worthies are absent? Perhaps they were particularly popular among English authors. In an article published in 1946, Celeste Turner Wright pointed out that, during and following the reigns of Queen Mary I (1553–1558), and Queen Elizabeth I (1558–1603), English authors often cited the Nine Worthy Women to justify female governance, to prove women's ability in national affairs, and to attack the Salic Law of France that excluded women from succession to the throne ('The Elizabethan Female Worthies', Studies in Philology, 43 (1946), 628–43).