It is midnight on 24th December in the great city of Paris, sometime in the last quarter of the 13th century. Paris is the most populous city in Europe with around 200,000 residents, and it is the centre of learning, government and commerce in France. Tonight all is quiet in the city's many ports, markets, workshops, lecture halls and council chambers, but the sound of chanting is rising from the churches, filling the cold night with warm music. Within the walls of the royal palace on the Île de la Cité, the clergy of the royal chapel of Sainte-Chapelle are celebrating the feast of the Nativity from a beautiful new book. 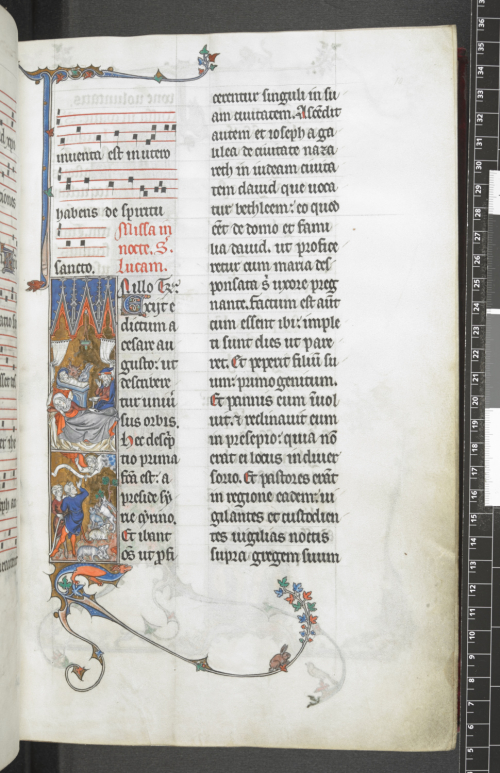 The book is a Gospel Lectionary, a collection of the Gospel passages to be read during the mass throughout the year. They are arranged in calendar order, beginning with the season of Advent. The Gospel readings for each day of the year were established in the early Middle Ages and, with a few local variations, were traditional throughout the churches of Western Europe. Like the entire service, the readings are all in Latin.

At Christmas, three masses are performed throughout the day. The reading for Midnight Mass is Luke 2:1-14, which tells how Joseph and Mary travelled to the city of Bethlehem, where Mary gave birth to Jesus in a stable and laid him in a manger. Meanwhile, shepherds watching their flocks were visited by an angel, who announced to them the birth of Christ and explained where to find him.

As the deacon reads the words, he can see the events delicately illustrated in the decorated letter that opens the reading. Almost every one of the readings in this luxurious lectionary begins with an illustrated letter, 262 in total. The letters, known as ladder initials, are slender and towering, divided into horizonal tiers and topped with gothic architectural features, much like the magnificent building for which the manuscript was made.

The upper level of the letter shows the Nativity scene—Mary reclining in bed, Joseph sitting behind, the baby Jesus lying in a high altar-like manger being nuzzled by the ox and the ass. The lower level shows the surprised shepherds and equally surprised sheepdog encountering the angel, who points urgently up to the Nativity above. The top of the initial features alternating Gothic pinnacles and gables, similar to the distinctive exterior of Sainte-Chapelle (below). 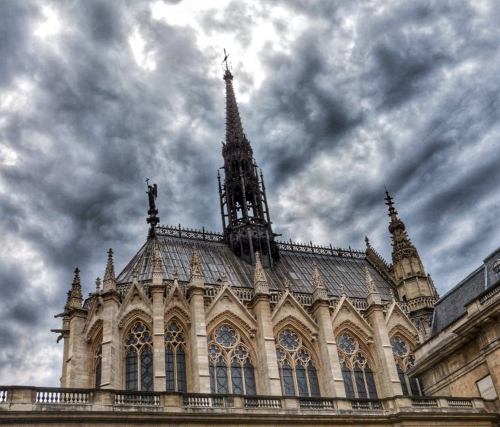 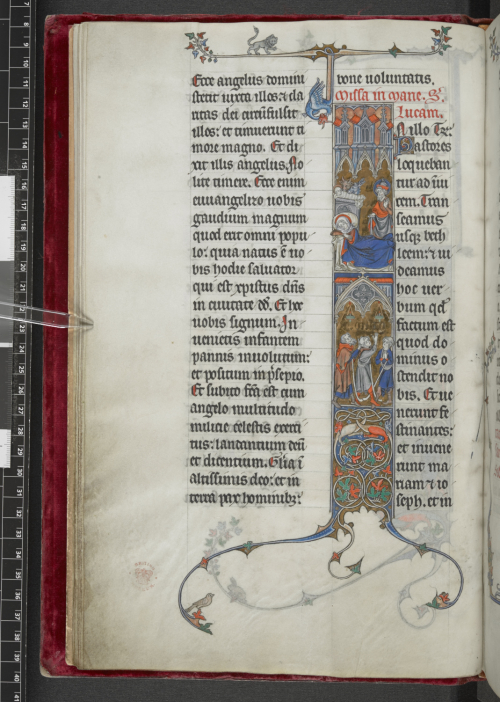 After Midnight Mass, the clergy and congregation of Sainte-Chapelle go to bed, their heads filled with the joyful words and bright images. Later, the community returns to the church for the second service of the day, the Dawn Mass. The reading continues with Luke 2:15-20, in which the shepherds go to Bethlehem, find the Holy Family and glorify God.

The decorated letter shows the Nativity in the upper scene, almost but not quite the same as before. Mary has now crossed her arms, and with her wistful expression she seems to illustrate the line of Luke 2:14, 'Mary kept all these words, pondering them in her heart'. She is also now covered by a blue quilt with a red lining, perhaps Joseph's cloak from the previous scene. On the lower level, the shepherds are praising God, two of them reverently raising their arms and one clutching his hands to his heart. Their arrival is signified by the gothic architectural structure under which they now stand. With its pointed arch containing two trilobe arches and a quatrefoil medallion, the structure closely resembles a design that is repeated along the lower walls of Sainte-Chapelle's upper chapel (below). 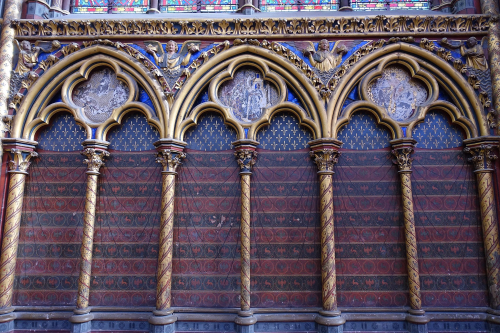 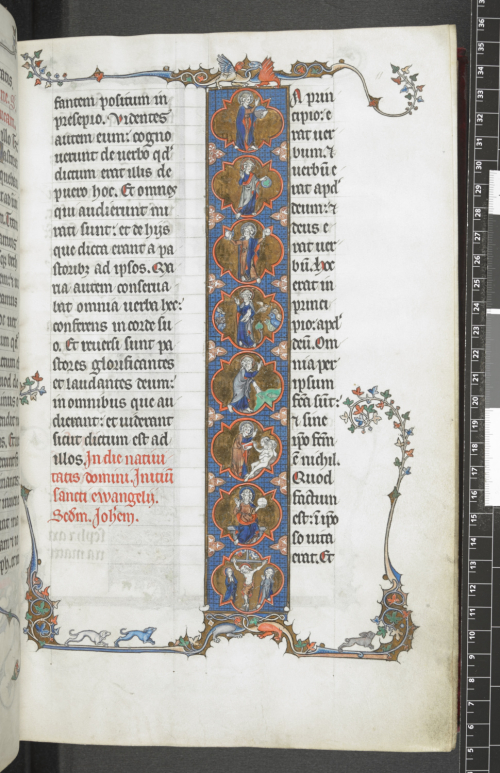 The third and most important mass of Christmas, distinguished with the largest and most elaborate decorated initial in the lectionary, was celebrated during the day. The reading is John 1:1-14, 'In the beginning was the Word', which describes how the Word of God created the world and then became flesh in the person of Christ.

In the decorated initial, the six days of Creation, the seventh day of divine rest and the Crucifixion are represented inside barbed quatrefoils. The scenes emphasise the message of the Gospel reading, adding the solemn reminder that Christ's human birth meant that he could die a human death, and so achieve salvation for humanity. The slender column of quatrefoil medallions is reminiscent of Sainte-Chapelle's soaring windows with their panels of geometric glasswork (below). 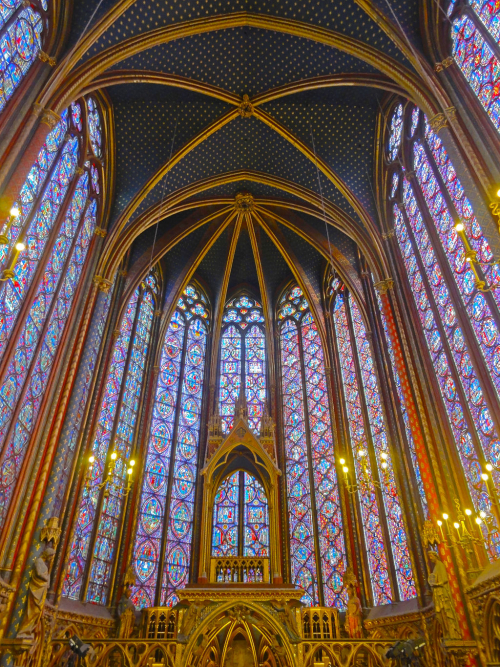 As the service comes to an end, the clergy and congregation of Sainte-Chapelle gaze around the chapel. The winter sunshine is streaming through the stained-glass windows and the lofty vaults are pointing the way to heaven. Those within sight of the book can see sacred history minutely represented inside letters that echo the architecture of the building. For a moment, the events of the Christmas story seem be to present within the gothic splendour of Sainte-Chapelle. Everyone is filled with wonder as they leave the chapel and head to their Christmas feasts. 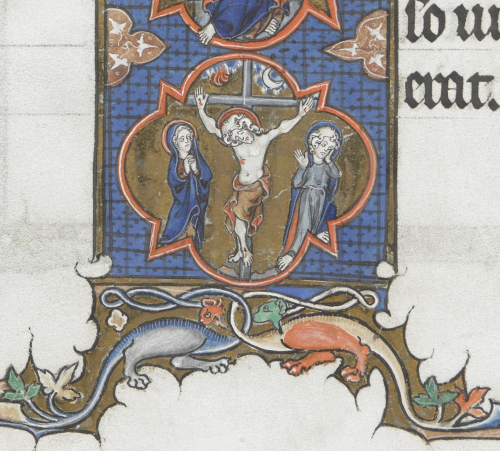 The Crucifixion in the decorated initial for the reading for Christmas Day Mass, Gospel Lectionary of Sainte-Chapelle: Paris, last quarter of the 13th century, Add MS 17341, f. 11r

The Sainte-Chapelle Gospel lectionary is currently on view as part of the Sacred Texts display in the British Library's Treasures Gallery, open on the readings for the dawn and daytime masses on Christmas Day. Visit us to see this festive treat in person (check our seasonal opening hours).

Merry Christmas from the Ancient, Medieval and Early Modern Section of the British Library!