You may have heard about the medieval knight’s rivalry with the snail, which we featured in this famous blogpost. But knights also had a more fearsome natural adversary, a fabulous creature from Ethiopia or India, with the body of a lion and the wings, head and (occasionally) talons of an eagle. That beast was none other than the griffin.

Images and descriptions of knights fighting griffins abound in medieval art and literature. They range from the woodcarvings on the benches of Norwich Cathedral and St Botolph’s Church at Boston (Lincolnshire) to the margins of medieval manuscripts, such as this Psalter (Add MS 24686), originally intended as a wedding gift for Prince Alphonso (d. 1284), son of King Edward I. 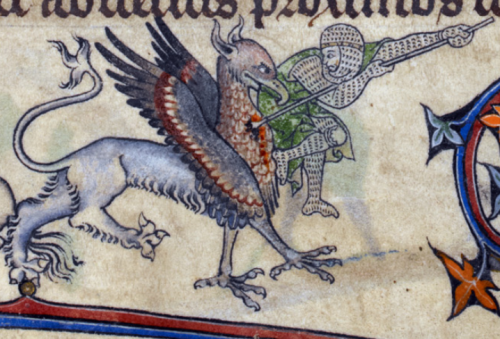 The notion of knights and griffins in combat was influenced by the accounts found in bestiaries and natural encyclopedias. In the English translation of De proprietatibus rerum (‘On the Properties of Things’) by Bartholomaeus Anglicus (Harley MS 614, f. 104v), it was claimed that the griffin ‘greven boþe hors and man’ (‘harms both horses and men’). Another account is found in a fictional travel memoir attributed to Sir John Mandeville, describing the wonders of the Holy Land, Africa and Asia. This evokes the image of the creature carrying a knight on horseback back to its nest:

(‘The griffin has a body that is larger than eight lions and larger and stronger than a hundred eagles, since he will carry to his nest a large horse with a man on top of it.’) 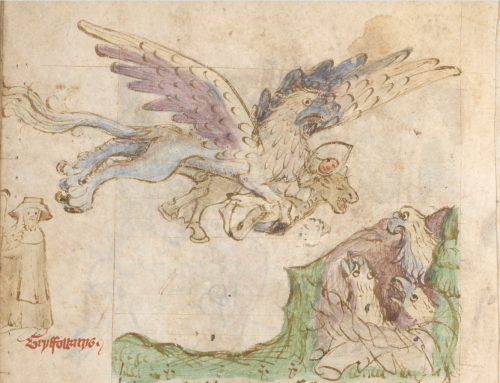 A griffin carrying a knight and horse to its nest (eastern England, 2nd quarter of the 15th century): Harley MS 3954, f. 54v

In the Roman d’Alexandre, a 12th-century romance describing Alexander the Great’s legendary exploration and conquest of the world, it was recounted that, after leaving the legendary country of ‘Tradiaque’, Alexander lost many men in a battle with griffins. Eventually, his archers managed to shoot them out of the air. The artist who decorated one manuscript of the Roman d’Alexandre in the late 13th-century (Harley MS 4979) depicted a griffin lifting a knight in full armour into the air, thereby demonstrating its great strength. 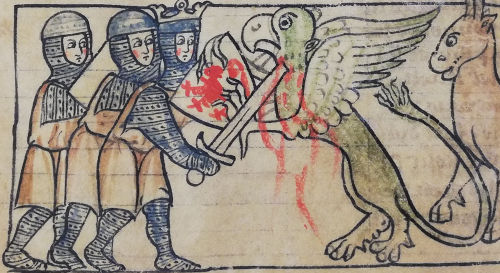 A very early representation of a knight fighting a griffin features on a 12th-century wax seal attached to a charter (Harley Charter 44 E 19) in which William Basset, abbot of St Benet of Hulme (1127-1134), Norfolk, granted the lease of the manor of Heigham in Norwich to Richard Basset (I) of Weldon. The seal of Richard Basset features a knight in full chain armour with a Norman helmet and shield, and striking with his sword a griffin holding a naked man in its jaws. This seal once belonged to Sir Simonds D’Ewes (1602–1650), an antiquary whose collection formed the cornerstone of the Harleian library. In his autobiography, D’Ewes mentioned viewing it on 4 August 1632, and considering it ‘the oldest [seal] that I ever saw’ (J. Halliwell-Phillipps, The Autobiography and Correspondence of Sir Simonds D'Ewes (1845), II, p. 76). Seeing its fragile state, he had it ‘three times tricked out [i.e. outlined] by a most skilful hand, and [I] had two of those copies or draughts very exactly depicted or coloured’.

After acquiring the seal, D’Ewes referred to it as ‘the most precious monument in my library’. Great was his dismay, therefore, when he discovered that a portion containing the griffin's wings and the top of the tail had broken off in 1636. Luckily, he found consolation in the colour copies he had made of it:

‘[M]y vexation and trouble would have been much the greater had I not preserved the true form and colour of the same seal in those exact draughts I had caused to be identically delineated and coloured from it.’

So far, scholars have known of only one early modern hand-drawn copy of the seal — when it was still more or less intact — made by Sir William Dugdale (1605–1686), antiquary and herald, for Sir Christopher Hatton’s Book of Seals, begun in 1640. We have now discovered an older and possibly more accurate copy while cataloguing the Harley manuscripts. This copy of the seal features in Harley MS 6152, at the end of several hand-drawn reproductions of charters related to the Basset family. According to Humfrey Wanley (1672–1726), Keeper of the Harley collection, the reproductions were made by or at the instruction of Sir Simonds D’Ewes. Next to the copy, someone has added a note in which they testify to its accuracy by comparing it with the original seal. As the note is dated to 15 September 1632, it was made shortly after D’Ewes viewed the seal. All of this suggests that the version in Harley MS 6152 is one of the two colour copies that D’Ewes referred to in his autobiography. 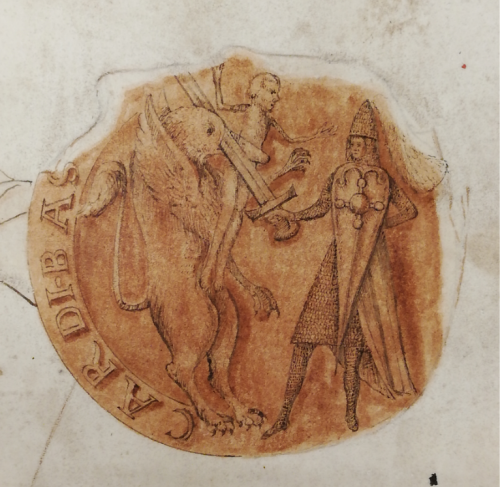 The seal’s symbolic meaning is unknown, but the image of a fabulous creature — such as the dragon or wyvern — devouring a naked man became more common on coats of arms designed during the age of heraldry, from the middle of the 12th century. The knight fighting the griffin may refer to the Basset family’s military valour or expeditions in faraway countries — where griffins were thought to live — during the Crusades. At the very least, we can deduce that medieval artists and heralds were drawing upon centuries-old precedents whenever they illustrated knights and griffins in combat.