This blog tends to focus on the inside of the Library’s collection items, on their varied texts and remarkable illustrations. But the physical outside of a manuscript can be just as intriguing.

Most medieval and early modern manuscripts no longer have their original bindings. The earlier the manuscript, the rarer it is that the binding survives. The binding is a book’s first defence against wear and tear, dirt and water damage. Even if it is kept clean and safe, the frequent opening of a book puts pressure on, and eventually wears out, the binding supports. Additionally, many manuscripts have been rebound in modern times by their later owners, who often wanted their entire collection to have the same bindings. As a result, original or near-contemporary medieval bindings that still survive are rare.

The type of high status binding that would have been the very rarest at the time of production sometimes survives from the early medieval period. These deluxe bindings are known as treasure bindings, because of their lavish and high-quality materials and craftsmanship. Excitingly, several early medieval treasure bindings are among the manuscripts digitised as part of the Polonsky Project. Read all about their decorations of carved ivory, precious metals and gems, in the article about medieval bindings on the Polonsky Project website. Lower cover with exposed wooden board: binding of Add MS 37518, 1st quarter of the 9th century.

However, the humbler medieval bindings that still survive can be just as exciting. For example, we have an early binding of a copy from the early 9th century of the so-called Commentarii notarum tironianarum (read more about this manusctipt in a previous blogpost on antique shorthand in Carolingian books). It might not be the original binding, but it was probably made no more than two centuries after the manuscript that it protects.

The date can be determined because the process of attaching the boards is typical of the Carolingian method, which was popular during the 8th to 12th centuries. For this manuscript, the method of board attachment is visible because the whitish leather that once covered both wooden boards and the spine is partially lost. The exposed lower board and spine makes it easy to study the pattern of the lacing (the cords that are threaded through the inner edges of the wooden boards) and the sewing supports (the way that those cords were attached to the gatherings of parchment that make up the text block). As a result, it provides a good opportunity for studying the otherwise covered parts of an early binding. 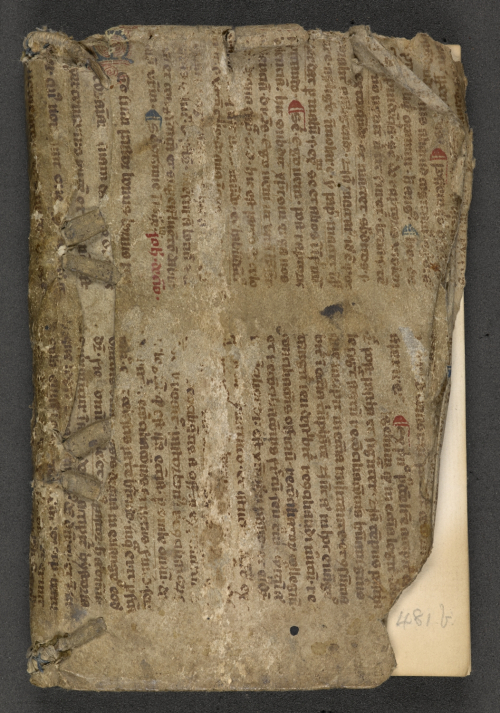 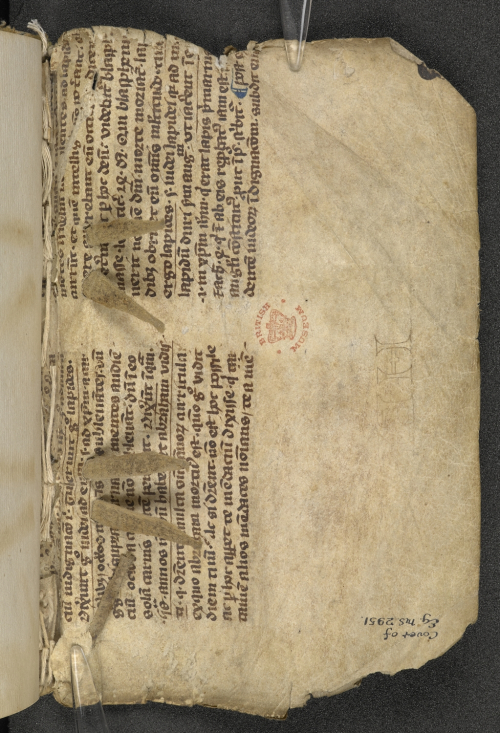 Inside of the lower part of the former cover for Egerton MS 2951, 4th quarter of the 12th century; now kept separately as Egerton MS 2951/1, 2nd half of the 14th century.

Another relatively common – and relatively low-cost – medieval way to cover manuscripts was to reuse leaves from another manuscript no longer considered useful. This is the kind of binding that was used to cover the collection of poems written in late 12th century, now Egerton MS 2951. At some point after the mid-14th century, the collection was given a ‘limp’ parchment binding made from a bifolium of a manuscript of the Gospel of St John written during the latter half of the 14th century. The binding is now removed and kept separately, but the old strips of alum-tawed leather that were used for the lacing are still visible on the insides of the covers. 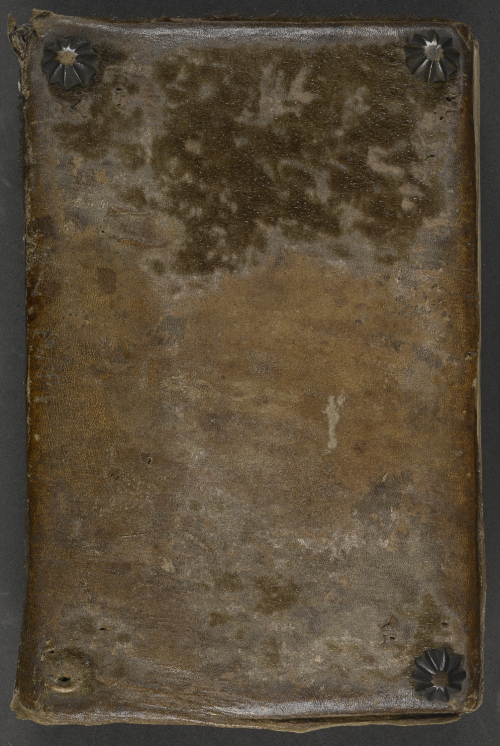 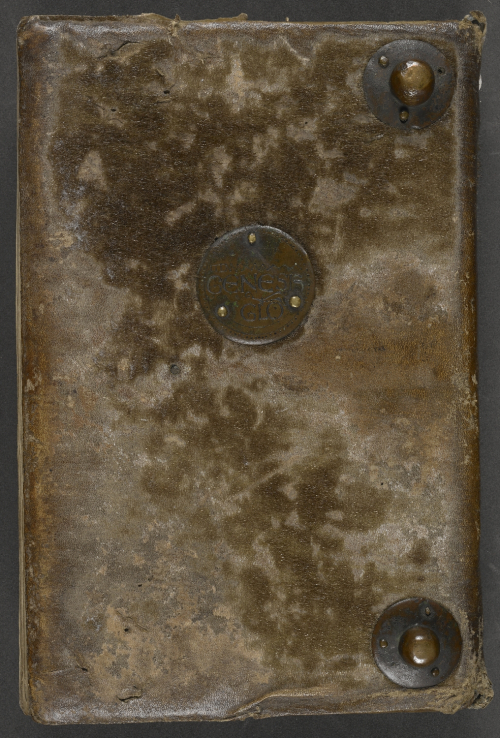 Lower cover with metal bosses and a copper roundel inscribed ‘GENESIS GLO[SATUS]’: binding for Add MS 63077, 2nd half of the 12th century.

Sometimes surviving medieval bindings were made with more unusual materials. For instance, the binding of a 12th-century glossed book of Genesis (Add MS 63077), which is later than the manuscript it protects.  The metal furnishings – the metal bosses still surviving on both covers, and the inscribed copper so-called ‘title window’ of the lower cover – are characteristic of Gothic bindings. Fixtures like these started becoming common by the early 14th century. What is uncommon about this Gothic binding, however, is that the still furry leather used to cover it might be made from sealskin!

Next time you check out a digitised manuscript, don’t forget to scroll to the images of the binding – it might be a rare medieval one.

‘Bookbinding – Parts’, https://www.youtube.com/watch?v=nOBTrua1eH0, (2016), by Prof. Ana B. Sánchez-Prieto, part of the course ‘Deciphering Secrets: The Illuminated Manuscripts of Medieval Europe’, by the universities of Colorado (USA) and Complutense of Madrid (Spain), see platform on www.coursera.org