Renard the Fox, rebel and mischief-maker

The British Library's new family-friendly exhibition, Marvellous and Mischievous: Literature's Young Rebels, features some of the most lovable young hell-raisers in fiction. They include Matilda, Max (from Where the Wild Things Are) and a host of animal characters, from Zog the Dragon to the beast in Billy and the Beast.

Literary rebels and mischief makers have been around for a very long time and one of the best known is an animal — Renard the Fox. He is a cunning prankster who delights in creating mayhem for its own sake, but who sometimes falls victim to his own tricks. 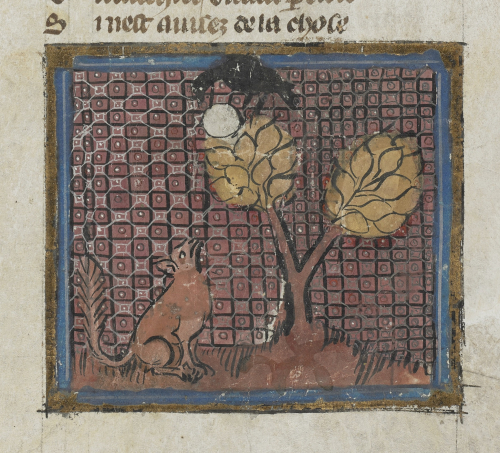 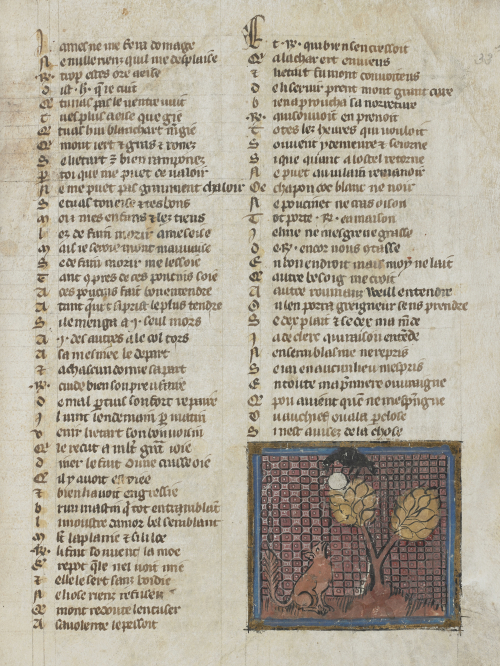 Renard persuades the crow to sing and drop the cheese he is holding, in Le Roman de Renart: Add MS 15229, f. 33r

The Renard stories are part of a long tradition of animal fables across Indo-European cultures and languages, from Afghanistan to Zaragoza. Other famous examples include the Sanskrit Panchatantra (around AD 300) and the classical Aesop’s Fables. The Roman de Renart, a French cycle of poems, became so popular that the original word for fox, ‘goupil’, was replaced by ‘renart’ in Middle French (it derives from the German ‘Raginhard’, meaning brave). An expression of the comical and satirical spirit of the time, the Roman de Renart parodies aspects of courtly literature, aristocratic refinement and religious hypocrisy. One of the British Library's illuminated copies, containing 14 of the tales and 13 colour miniatures, has recently been digitised and is now available online. 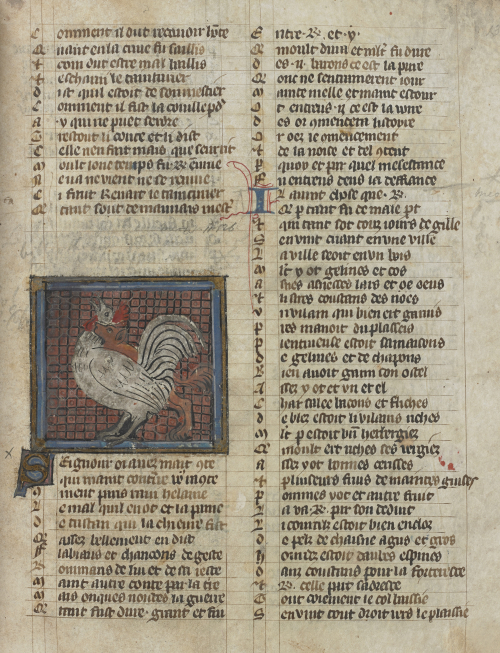 In one of the most popular medieval tales, Renard manages to sneak into a chicken enclosure. The hens see him and scatter, but Chanticleer the cockerel, whose bravado exceeds his common sense, ignores the threat. Renard immediately sets about flattering him, calling him ‘Master Chanticleer’ and ‘cousin’, and persuading him to demonstrate his beautiful voice. Stretching his neck, both eyes closed, Chanticleer crows with all his might, a perfect opportunity for Renard to seize him by the throat and run off. However, the wily fox is caught out when Chanticleer encourages him to shout insults at the farmer giving chase. He opens his mouth and the cockerel escapes. Renard later plays a similar trick on the crow. The story of Chanticleer was later adapted by Chaucer in the Canterbury Tales as the ‘Nun’s Priest’s Tale’.

Scenes of foxes and cockerels are sometimes found in the margins of religious and scholarly manuscripts, like this volume of scholastic texts produced in a Paris workshop. 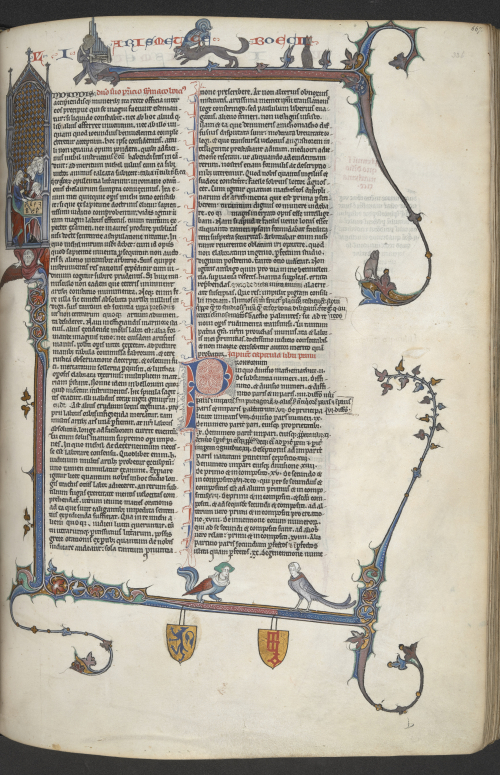 In the lower margin of a Psalter, a cockerel sings from a book on a music stand, watched closely by a fox. This mirrors the religious scene above it, showing three monks singing at a lectern. 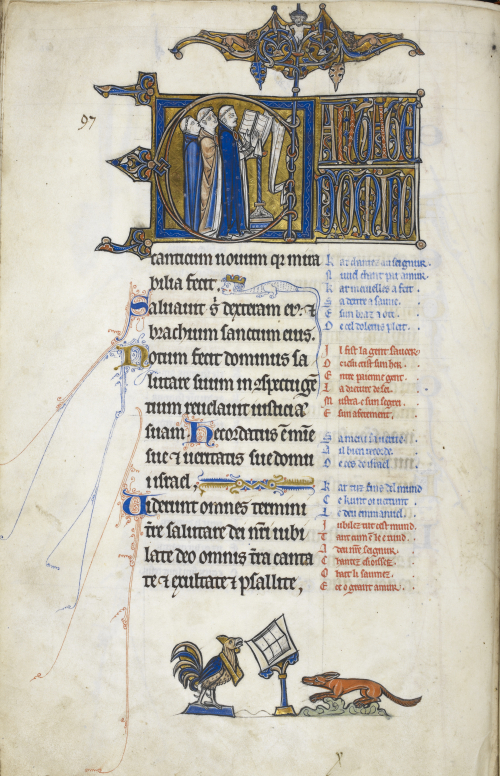 In another famous episode, Renard the Fox is present at the court of King Noble, the Lion, and is accused of serious crimes against his fellow animals. He is sentenced to be hanged. But Noble falls seriously ill and Renard sets out to try to redeem himself by finding a cure. He steals a bag of herbal remedies from a sleeping pedlar and, having performed an examination on the king, promises to heal him provided he is given the skin of a wolf, the antlers of a stag and the fur of a cat. The outcome is that Noble is cured, Renart is restored to favour, Isengrin the wolf is skinned, Brichemer the stag is de-horned and Tibert the cat is lucky to escape. This story is illustrated in the margins of a book of canon law known as the Smithfield Decretals, a medieval masterpiece decorated with over 600 illustrations on subjects varying from saints’ Lives to romances. 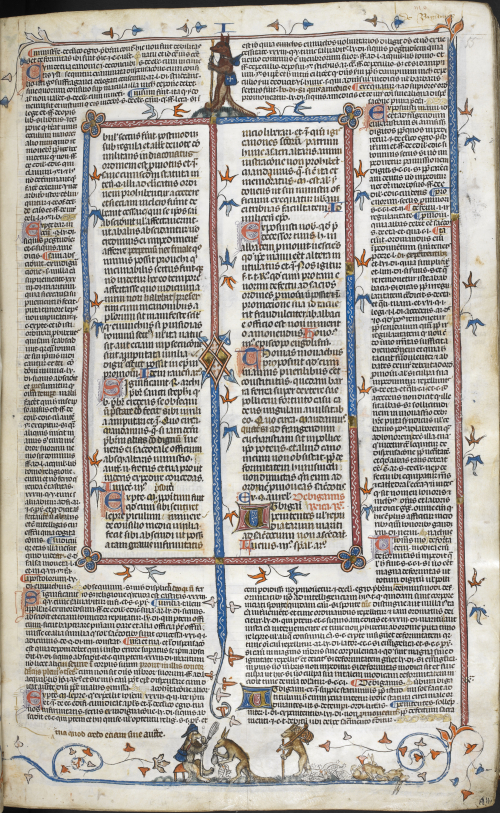 (1) A fox with a staff and pouch feels the pulse of a lion; (2) a wolf is skinned by two foxes; (3) above, a fox with a pilgrim bag and staff; below, a smiling fox sets off, leaving slaughtered creatures behind him (right); the fox bows to a lion, offering him a dead goose and money bag (centre), in the ‘Smithfield Decretals’: Royal MS 10 E IV, ff. 54r, 56v, 55r

Likewise, in Spiegel der Weisheit, a collection assembled in German for Albrecht IV, Duke of Austria (1395–1404), there is a story of a fox going on a pilgrimage, illustrated in this manuscript from Salzburg. 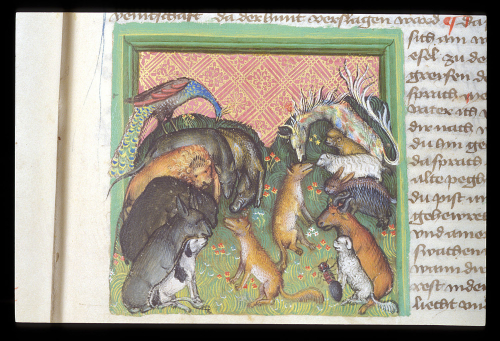 A fox, setting off on a pilgrimage, refusing the companionship of the watch-dog, lion, peacock and others, and instead choosing the panther, ape, lamb, hare, hedgehog, ox, young hound, and the ant, Spiegel der Weisheit: Egerton MS 1121, f. 36r

Our free Marvellous and Mischievous exhibition abounds with tales of young literary rebels, following in the tradition of Renard the Fox. It is on at the British Library until 1 March 2020, and is well worth a visit this holiday season.