We recently blogged about the Greek manuscripts that tell the tale of the Trojan War, an ancient conflict between the Greeks and the Trojans which ended in the destruction of the great city of Troy. We learned how this relatively unexceptional conflict was elevated to the stuff of legend through Homer’s masterful Greek epics, the Iliad and the Odyssey (if you haven’t already, catch up with Part 1 of this blog post). Today we are following the tale of Troy through Roman and medieval culture, where we will discover that despite losing the war against the Greeks, the Trojans won the more enduring victory as fundamental heroes of western literature.

These blog posts are written to coincide with the British Museum’s current exhibition, Troy: myth and reality (21 November – 8 March 2020‎), which features seven ancient and medieval manuscripts from the British Library. Check out the exhibition to learn more and to see these manuscripts in person. 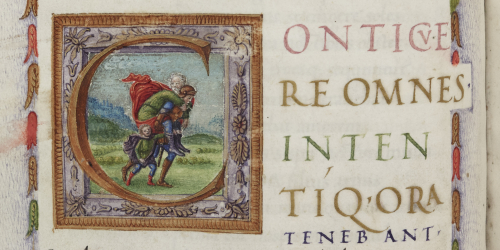 In the first century BC, the tale of Troy was reimagined in one of the greatest works of Latin literature—the Aeneid by the Roman poet Virgil. This epic poem forms a sequel to the Iliad that transforms the Trojan legend into an origin myth for the Roman Empire. It tells the story of Aeneas, one of the few Trojan heroes to survive the fall of Troy, who managed to escape the burning city carrying his aged father Anchises on his back and leading his young son Ascanius by the hand (depicted above). Aeneas led a large following of Trojan refugees as they wandered around the Mediterranean, beset by constant hardships, searching for a new home. Eventually the Trojans reached Italy, where they were prophesied to flourish. There they fought a brutal war with the native tribe the Rutuli, culminating in Aeneas killing the Rutulan leader, Turnus.

The Aeneid was tremendously admired in the Roman period and the Middle Ages. It was read in schools as the epitome of great poetry, and widely imitated in Latin literature of all kinds. It also had an important legacy in shaping perceptions of European political heritage. Throughout the poem it is foretold that the Trojan kingdom in Italy will one day form the mighty Roman Empire, and the gods prophesy the birth of Julius Caesar from Aeneas' line. In this way, the Aeneid provided an influential model for adapting the Trojan legend to serve contemporary political ends. 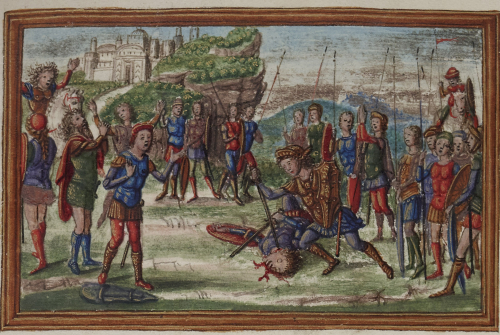 Just as Virgil created a sequel to the Iliad that claimed the Trojans as founders of the Roman Empire, so Geoffrey of Monmouth created a sequel to the Aeneid that re-cast the Trojans as founders of Britain. In his enormously popular work, History of the Kings of Britain (c.1136-38), Geoffrey set out to fill the gap in people’s knowledge about Britain's pre-Christian past. The tale he recounted is more mythical than it is historically accurate.

Geoffrey explains that after the Trojans settled in Italy, Aeneas' great-grandson Brutus was exiled for accidentally killing his father. Like Aeneas before him, Brutus led a following of displaced Trojans in search of a new land in which to settle. Following the advice of the goddess Diana, they discovered an island named Albion which was inhabited only by giants. They settled, killed the giants, and re-named the island Britain after Brutus. They also built a city called 'New Troy', which was later renamed London. One of the earliest known representations of the city of London appears beneath Geoffrey’s description of ‘New Troy’ in this 14th-century copy of the History of the Kings of Britain. 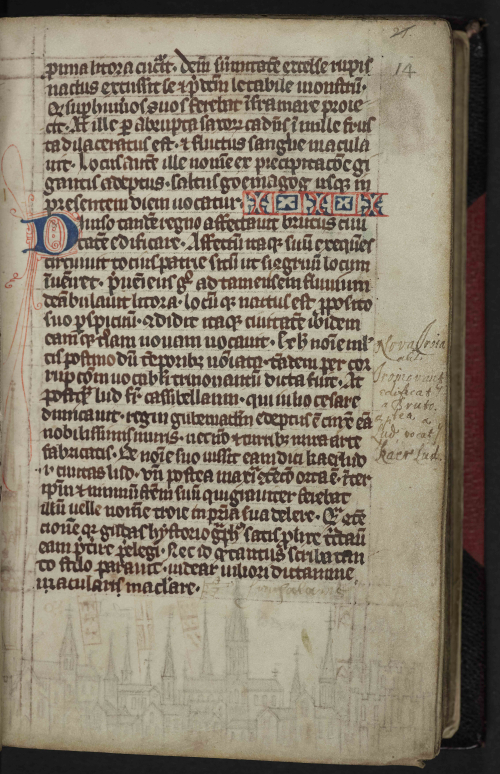 Geoffrey of Monmouth, History Of The Kings Of Britain: Royal Ms 13 A III, f. 14r

New works on the legend of Troy were composed throughout the Middle Ages, not only in Latin but also in vernacular languages. These texts brought the tale to wider audiences and shaped it for new purposes. John Lydgate composed the extensive Middle English poem Troy Book in 1412-1420 at the request of Prince Henry, later King Henry V. In his prologue, Lydgate praises Henry’s excellent qualities, which he links to his supposed descent from the Trojans through Brutus, calling Henry the worthy prince, ‘To whom schal longe by successioun / for to governe Brutys Albyoun’. This luxurious manuscript of the Troy Book was probably made as a presentation gift to Henry V’s son, Henry VI. 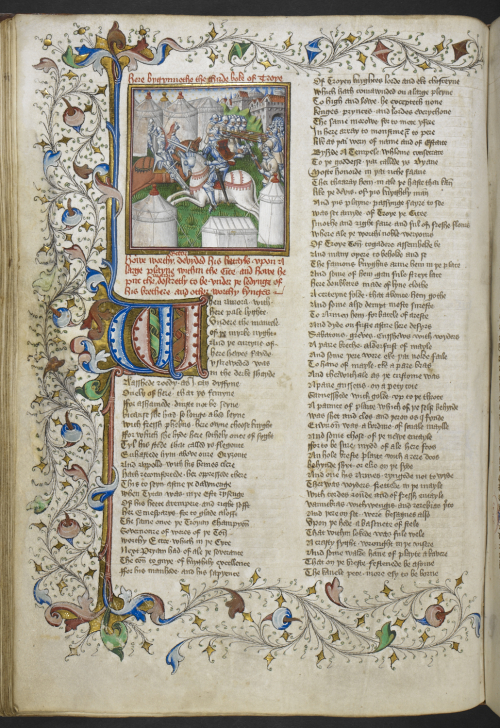 The legend of Troy also appeared in French versions such as the monumental Histoire ancienne jusqu'à César. This universal chronicle, first composed c. 1208-13, blends biblical, ancient and legendary history from the Creation of the world to Caesar’s conquest of Gaul. In the 1330s, a second version of the text was compiled that cut out the sections on Genesis and Alexander the Great and greatly expanded the account of the Troy legend. This firm shift in focus towards the Trojan War as the defining event of ancient history may have been intended to create a clearer link between the Trojans and the Angevin rulers of Naples for whom the second redaction of the Histoire ancienne was created.

Manuscripts of the Histoire ancienne were often beautifully illuminated. This copy of the second redaction features a two-page miniature of the Greeks attacking Troy from the sea, looking strikingly like a scene of medieval warfare. 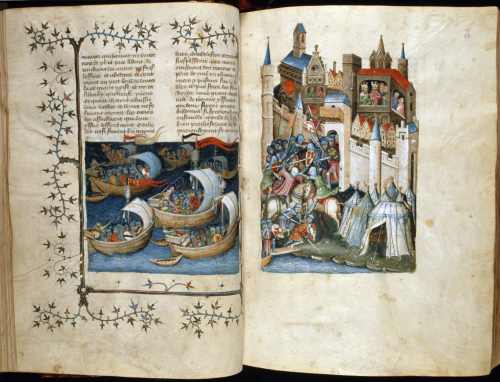 From ancient Greece, to ancient Rome, to medieval culture, the epic of Troy has been told countless times. Discover more about this dramatic myth and view these manuscripts in the British Museum’s  exhibition Troy: myth and reality (21 November – 8 March 2020‎).