Animals on coats of arms

We invite you to explore some of the wildlife that can be found in our heraldic manuscripts. Medieval and early modern coats of arms ‚Äî visual designs symbolising the heritage and achievements of individuals and families ‚Äî are teeming with animal life. These animals are depicted according to heraldic conventions, but sometimes they also display fabulous features originating from medieval illustrated ‚Äòbooks of beasts‚Äô, known as bestiaries.

It can sometimes be difficult to understand what these borrowings from the bestiary tradition represent. Luckily, we have a guide book at our disposal, namely the 15th-century Middle Scots Deidis of Armorie (found in Harley MS 6149). This ‚Äòheraldic bestiary‚Äô explains what the behaviours and appearances of animals on coats of arms indicate about the origins of specific families. The manuscript containing the Deidis of Armorie has recently been digitised and can be found on our Digitised Manuscripts site. In this blogpost we'll study some extraordinary heraldic animals up close. 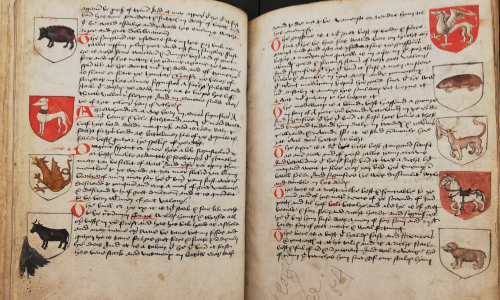 We start with the heraldic ostrich, happily chomping on its staple food: horseshoes and keys. This imagery originates from the bestiary tradition, which supposed that the animal had remarkable digestive abilities, enabling it to consume and process iron. What does the ostrich's presence on a coat of arms mean? According to the Deidis of Armorie, it signified that the first bearer of these arms ate hard things ‚Äî in other words, they were as tough as nails ‚Äî and that they had a defiant nature (‚Äòeite hard thingis and [wes] diffailland of natur‚Äô). 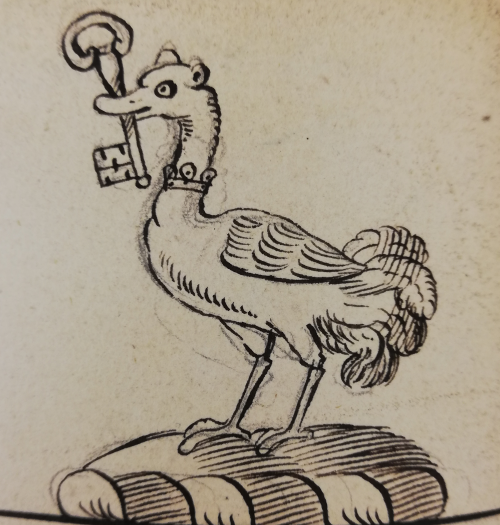 Tigers are often depicted on coats of arms gazing into mirrors. According to bestiaries, this imagery illustrated the method by which robbers could steal a tigress‚Äôs cub. The cub-nappers would be pursued by the tigress, but could deceive her by dropping a mirror on the ground. The tigress would stop to look into the mirror, mistake her own reflection for her stolen cub, and start nursing it, allowing the thieves to get away. The Deidis of Armorie claims that those who first bore the tiger on their coats of arms were feigning, cunning and deceitful (‚Äòdissimilit, wyly, and double in his dedis‚Äô). 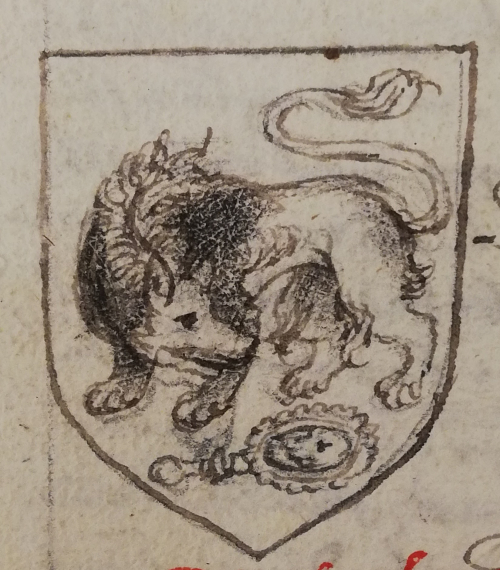 The heraldic elephant typically sported a tower or castle on its back. This imagery corresponds with the bestiary tale that male elephants were used in battle, and that men built castles filled with armed soldiers upon them. The Deidis of Armorie interprets a coat of arms inhabited by such an elephant as a sign that its first bearer was large and virtuous, and carried great burdens during their life (‚Äògret of body and of vertu, berand gret birdingis‚Äô). 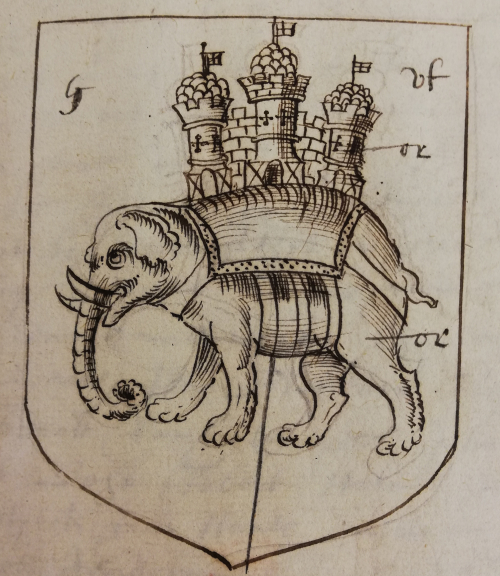 The heraldic pelican is found sitting on its nest while feeding its young with its own blood. Bestiaries told that the father pelican killed his young when they struck him with their wings, and that the mother subsequently revived them with her blood. The Deidis of Armorie explains that whoever first adopted a pelican on his coat of arms took vengeance on his neighbours when they harassed him, but that they were subsequently restored through him as well (‚Äò[√æai] wald have vengeance of his nixt nychtpuris quhen √æai did oppressioun [bot] nychtburis scalit his blud for till heill √æaim of his vengeance‚Äô). The heraldic panther is another wonderful sight. In line with the bestiary descriptions, coats of arms present it as a friendly animal with multi-coloured spots, issuing ‚Äòflames‚Äô out of its mouth and ears. The latter represent the sweet-smelling belch that the animal was wont to issue after a meal. Although the panther is not part of the Deidis of Armorie, Rodney Dennys (The Heraldic Imagination (Fakenham: Cox & Wyman, 1975), pp. 143‚Äì44) has pointed out that heraldic manuscripts sometimes interpret the animal‚Äôs multi-coloured spots as symbols for the many virtues of the arms‚Äô bearer. 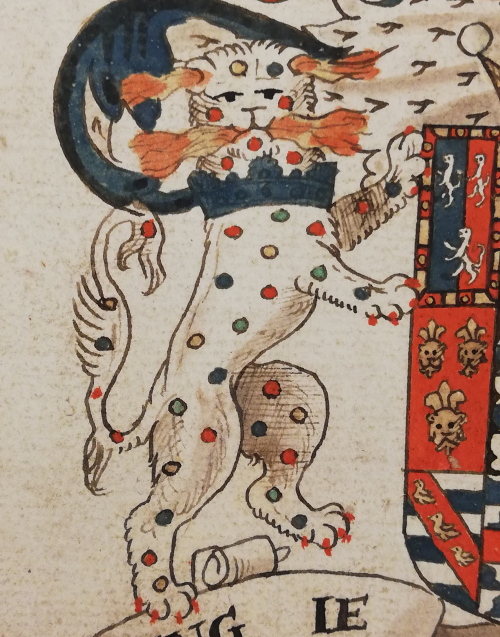 We end our tour with the heraldic salamander. Bestiaries claimed that the salamander was a fire-resistant animal, and so we find it basking in flames of fire on coats of arms. The salamander is not covered by the Deidis of Armorie , but Dennys suggested that its presence on a coat of arms signified that its first bearer had survived great danger. James Douglas (1426‚Äì1488), 9th Earl of Douglas and 3rd Earl of Avondale, was among the first to display the animal on his coat of arms, perhaps alluding to his surviving a failed insurrection against King James II of Scotland, and subsequently escaping to England. 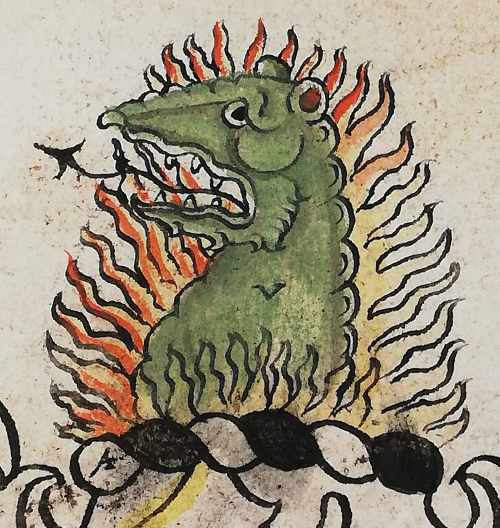 If you would you like to see more heraldic animals, and to explore the symbolism behind them, we would encourage you to look out the Deidis of Armorie on Digitised Manuscripts.

Posted by Ancient, Medieval, and Early Modern Manuscripts at 11:18 AM

Long-term readers of this Blog may know that we periodically publish lists of our digitised manuscripts (our last list was published in June 2019). As a special treat to celebrate the New Year, today we are releasing a new update to our lists of manuscript hyperlinks. We hope this makes it easier for you to explore our amazing digitised treasures. There are now over 2900 Ancient, Medieval and Early Modern manuscripts on our Digitised Manuscripts website and more are being added all the time. For a full list of what is currently available, please see this PDF: Download Full-list-digitised-mss-dec-2019. This is also available as an Excel spreadsheet: Download Full-list-digitised-mss-dec-2019 (this format cannot be downloaded on all web browsers). 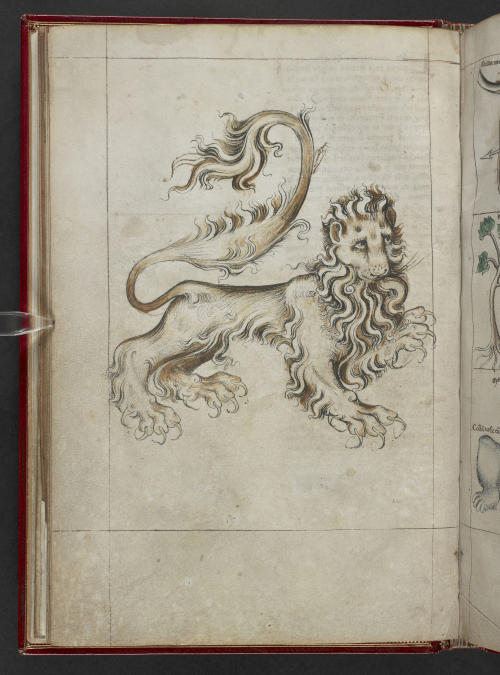 The Library's Ancient, Medieval and Early Modern team has been busy as ever over the last 6 months, working to make more manuscripts available online. All the images included in this blogpost are from manuscripts that we have digitised since June 2019. To admire our most recent additions to the Digitised Manuscripts site, take a look at this list of manuscripts published since June 2019. PDF: Download Digitised_mss_jun_2019_dec_2019. Excel: Download Digitised_mss_jun_2019_dec_2019. 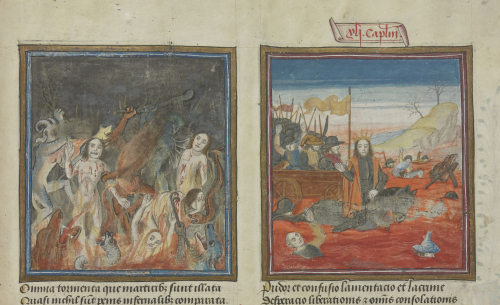 Illustrations of the punishments of Hell (left) and the drowning of Pharaoh and the Egyptian army in the Red Sea (right), from a 15th-century copy of the Speculum Humanae Salvationis (Mirror of Human Salvation), England, S. E. (London): Harley MS 2838, f. 44r

You can find out how to make the most of Digitised Manuscripts in this previous blogpost. Many images of our manuscripts are also available to download from our Catalogue of Illuminated Manuscripts which is searchable by keywords, dates, scribes and languages. 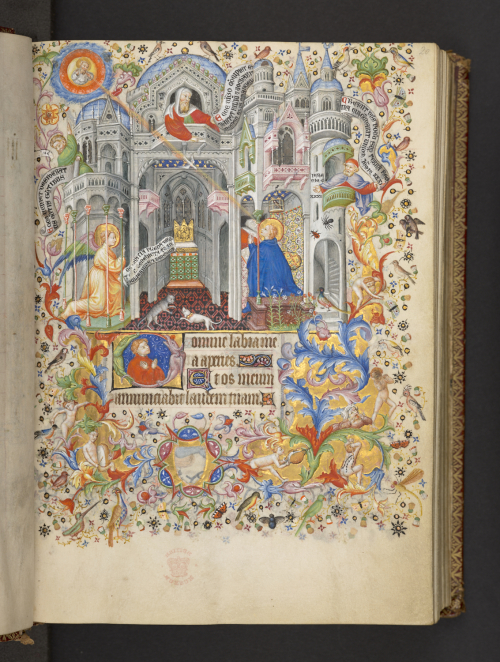 An illustration of the Annunciation at the beginning of the Hours of the Virgin Mary, early 15th-century Book of Hours, France: Add MS 29433, f. 20r

We hope you have a very Happy New Year and enjoy exploring Digitised Manuscripts!

Visit our Medieval England and France website to discover how to make a medieval manuscript, to read beastly tales from the medieval bestiary, and to learn about medieval science, medicine, monastic libraries and more.