Clever cats and other swashbuckling tales

We have recently published a new selection of manuscripts online. They contain a variety of swashbuckling tales, mischievous furry creatures, and ever more glorious images. Which is your favourite?

This book contains two little-known romances. The first, by Antoine de La Sale, tells the adventures of the hero, Jean, at the court of King John of France. His lady, the Dame des Belles Cousines, teaches him how to become the perfect knight. Following this is the tragic story of Floridan et Elvide, a French prose romance about a young couple who elope in order to avoid an arranged marriage. They are waylaid at an inn by a group of rascals, who first murder Floridan, then attack Elvide, who is forced to take her own life to avoid dishonour. A not so happy ending. 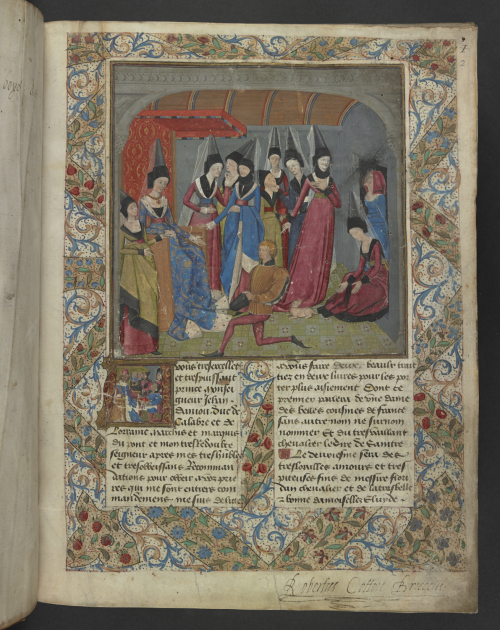 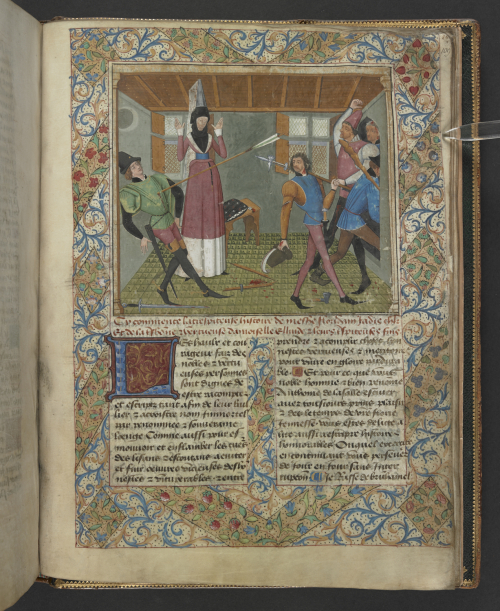 We recently blogged about this collection of tales of one of the world’s most famous tricksters. Tibert the cat is the only one of the animals who is the match of the cunning fox, Renard, and manages to avoid falling victim to his wicked schemes. 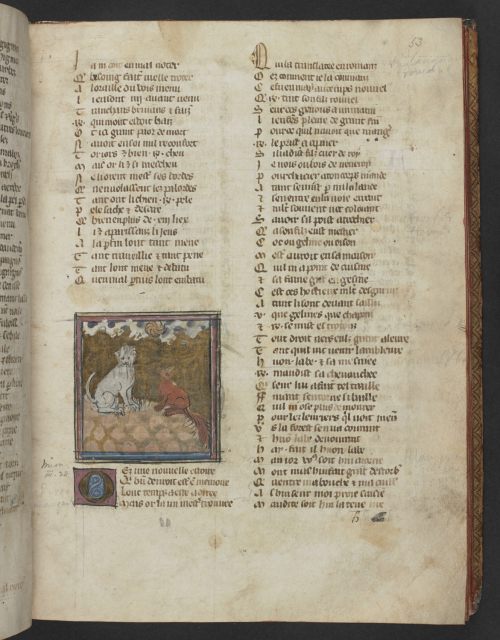 This manuscript, with coloured drawings showing Dante on his remarkable journey, was copied in Naples around 1370. It has the coats of arms of the Rinaldeschi family and the Monforte family, Counts of Biseglia (Naples), with on the final page are found entries of births and deaths in the family between 1449 and 1483. 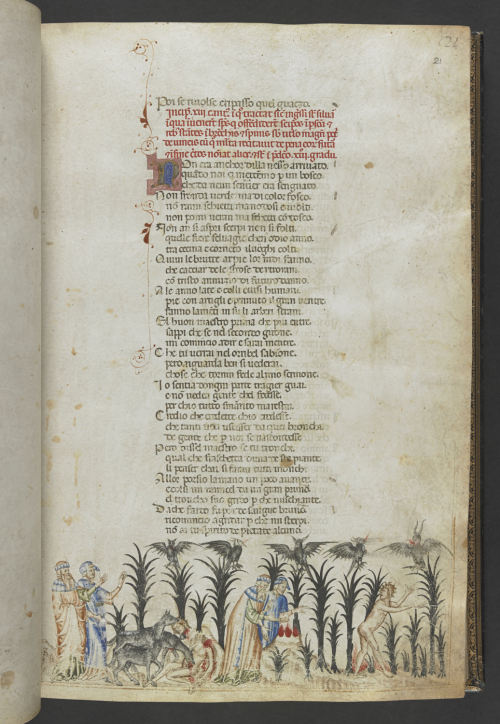 Dante and Virgil are in a barren wood, with the harpies perched on top of thorny trees, representing the souls of suicides; hounds tear the bodies of the profligates; Virgil breaks off a twig and the wounded tree drips blood, from Inferno, Canto 13: Add MS 19587, f.  21r

The Pilgrimage of the Soul (Egerton MS 615)

This allegory of life as a pilgrimage was translated from the French work by Guillaume de Deguileville. As in the well-known Pilgrim’s Progress, the protagonist, assisted by his guardian angel, undergoes various trials and overcomes temptation on a long journey that ends in Paradise. This manuscript was copied and illustrated somewhere in eastern England. 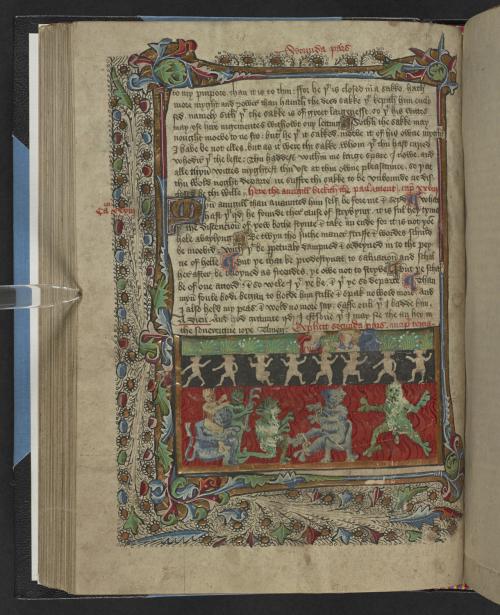 The pilgrim and his guardian angel, unbaptized souls in a band of darkness, devils torturing a soul and a mock court scene with Satan and a devil: Egerton MS 615, f. 46v

The Mirror of Human Salvation, made for a royal owner (Harley MS 2838)

The Mirror of Human Salvation draws parallels between episodes and prophesies in the Old and New Testaments, historical and natural events, and saints' Lives. This copy was made for King Henry VII (1485–1509), founder of the Tudor dynasty. The royal arms of England with the motto 'Honi soit qui mal y pense' are found on the first folio. 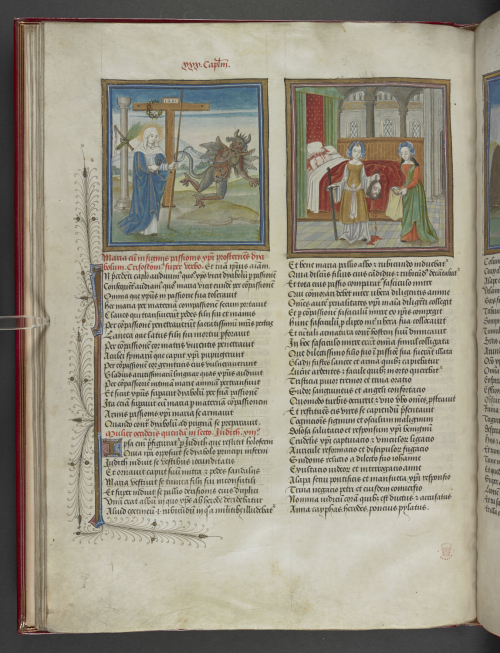 The Virgin Mary, holding the instruments of the Passion, banishes the devil; Judith holds the head of Holofernes: Harley MS 2838, f. 32v

This 13th-century volume contains Aldobrandino’s handbook on health, composed for Beatrice of Savoie (1220–1266). Its contents are based mainly on Latin translations of Arabic medical texts. It is followed by a poem by Gautier of Metz about the Earth and the universe. The first text includes a section on sleep as part of a healthy lifestyle, with an illustration of a situation that is all-too-familiar. 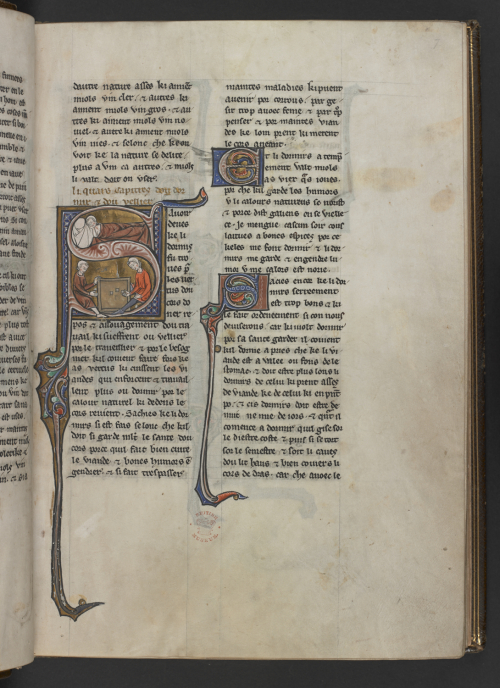 Illustration of a treatise on sleeping and waking; above, a person is sleeping peacefully; below, two people absorbed in a game that is keeping them awake: Sloane MS 2435, f. 7r

The Romance of the Three Kings’ Sons (Harley MS 326)

This Middle English romance concerns three young princes, Philip of France, Humphrey of England, and David of Scotland, who set off to battle the Turks. The illustrations in this manuscript are unique, as it is a rare surviving illustrated copy of the story. 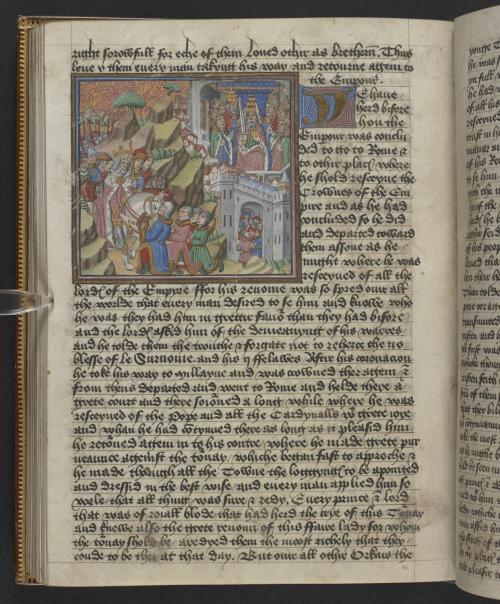 This 15th-century manuscript contains an abbreviated chronicle of France, from the destruction of Troy to the death of Louis de Mâle, Count of Flanders, in 1383. It was composed in 1459 by Noel de Fribois, counsellor to King Charles VII of France, and was written and painted for Etienne Chevalier, secretary to the king. 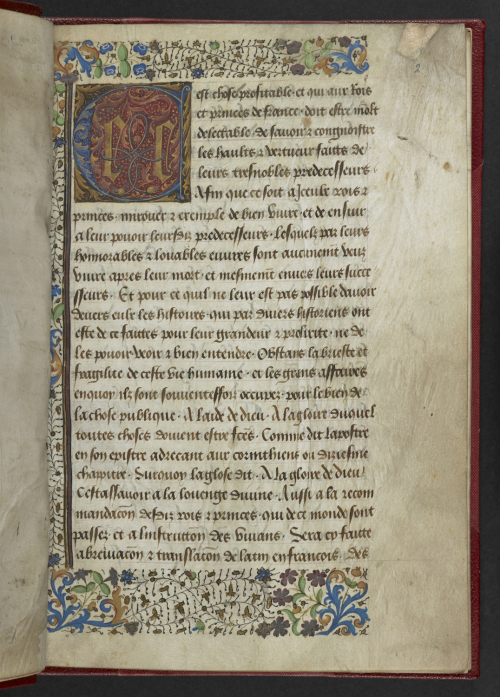 You can explore all these manuscripts in full on our Digitised Manuscripts site, alongside other gems from the British Library's collections.

Posted by Ancient, Medieval, and Early Modern Manuscripts at 11:59 AM