On 4 February we celebrate the feast of St Gilbert of Sempringham (1083–1189), an Englishman of Anglo-Norman descent who established the Gilbertine Order – the only religious Order that was founded in England during the Middle Ages. We would like to mark this event by sharing our discovery of a previously unidentified manuscript that was owned by the first of the thirteen monasteries that Gilbert established during his life: the Priory of St Mary at Sempringham in Lincolnshire.

Gilbert founded Sempringham Priory, in or shortly before 1131, for seven women who desired to follow a strict religious life. The house developed into a double monastery of nuns living under the Benedictine Rule, supported by priests following the Augustinian Rule, lay brothers and sisters. Three prioresses presided over the community.

The priory was dissolved in 1538, and subsequently completely demolished. Only six manuscripts from Sempringham are known to survive (they include Royal MS 3 A XV and Royal MS 5 C V). These were copied between the 12th and 14th centuries, mostly containing biblical and theological texts in Latin. Among the manuscripts surviving from Sempringham is a single Middle English text. This is an early translation of the Lord’s Prayer added to a Latin collection of the works of the theologian St Augustine of Hippo, found in Royal MS 5 C V.

While cataloguing the Harley manuscripts, we recently found a previously unnoticed 15th-century collection of Middle English recipes in Harley MS 6816 that apparently belonged to Sempringham Priory. The recipes are written on a booklet that was tucked away among 17th-century medical texts by the manuscript’s anonymous compiler. The booklet (ff. 97r–134r) contains recipes against ailments, diseases and poisons (nearly identical to those in Sloane MS 3285), recipes for making medical unguents, ointments and oils, and a glossary of plant names in Latin and English. Here are a few highlights:

An ointment for lightness in the head:

Take the juice of danewort, salt, honey, wax, and incense, boil them together over a fire, and anoint the head and temples therewith.

Anoyment for vanite in the hede

Tak the juse of wallworte salte and hony and wax and ensens and boile them to geder over þe fire and ther withe anoynte þe hede and the temples (f. 97r)

Take a red cabbage leaf, smear it with the white of an egg, and put it on the watering eyes when you go to bed.

Take a rede cole leffe and anoynte hit with the whitte of a egge and ley hit to the waterringe eyghen when thou goste to beedd (f. 97v)For a man who talks in his sleep:

For a man who talks in his sleep:

Take southern wormwood, mix it with wine, let the sick drink thereof when he goes to bed and it will calm him.

Take sowthernwoode and temper hit with wine and lett the seke drincke þerof when he gothe to his beede and it shall sece hym (f. 98v)

For a man who has a perilous cough:

Take rue, sage, cumin, and pepper powder, boil them together in honey, make an electuary [a sort of medical syrup], and use thereof a spoonful in the evening and another one in the morning.

For a man that hathe a perelous coghe

Take rewe sage and comyn and powder of pepper and seth them to geder in hony and make a letvarie and use here of a sponefull att even and a oder att morne (f. 99r)

Take vervain with honey and vinegar, blend them together, and drink it while fasting.

For the hede ache 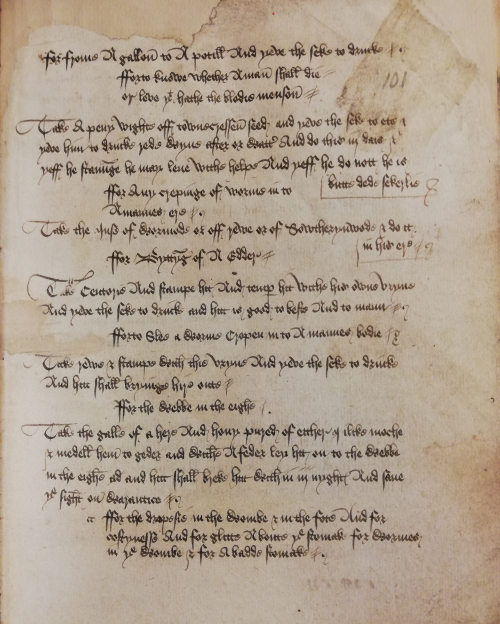 Recipes against worms in the ears and the poisonous bite of an adder (England, 15th century): Harley MS 6816, f. 101r

The booklet in Harley MS 6816 was probably at Sempringham Priory soon after it was produced. This is suggested by a legal document, dated to 8 March 1504, that an early 16th-century owner added to the booklet’s final leaf. In the document, the prioresses of Sempringham — ‘we the prioresses of the monastery of St Mary of Sempringham’ (‘nos priorissae Monasterij beate Marie de [Sem]pyngham’) — record a payment from the abbot of another monastery, possibly the nearby Premonstratensian abbey of Newbo. 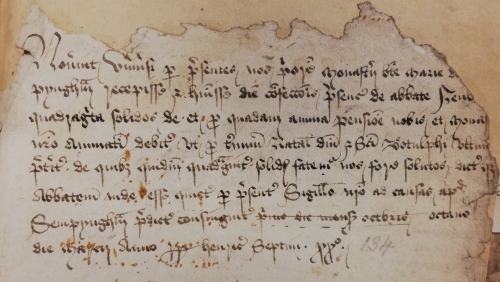 The document suggests that the collection of recipes was used by the nuns at Sempringham Priory. We know from the Book of St Gilbert — a collection of documents concerning the life and miracles of the saint which survives in Cotton MS Cleopatra B I and Harley MS 468 — that the nuns used such medical remedies. It records that a nun from Sempringham used to treat another nun who was suffering from leprosy with medical unguents in the infirmary. 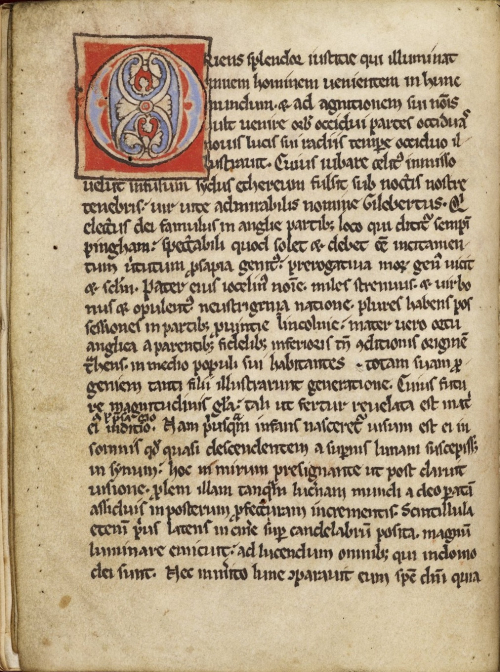 That Harley MS 6816’s medical recipes were used by religious owners is also evident from additions that were made to the booklet’s final pages. These contain Latin prayers to St Anthony of Egypt and St Sebastian for protection against the plague, and a drawing of the body of Christ after it had been taken from the Cross. Harley MS 6816 shows that Sempringham Priory, like other monasteries, had access to medical texts. Moreover, it suggests that although the collection of medical recipes may not have been written at the priory, the community customised it by adding their own religious texts and imagery.

Posted by Ancient, Medieval, and Early Modern Manuscripts at 7:06 PM