The exhibition Van Eyck: An Optical Revolution opens at the Museum of Fine Arts in Ghent this week, aiming to bring the medieval world of the Flemish court painter to life and contextualise his ground-breaking developments in oil painting. Around twenty works by Jan van Eyck (b. before 1390, d. 1441) have survived to the present day and are now housed at institutions around the world. Over half of these will be displayed in the museum for the next two months, most notably ‘The Adoration of the Mystic Lamb’, a 15th-century altarpiece from St Bavo’s Cathedral that has recently undergone extensive restoration. The exhibition will display these items alongside pieces by Van Eyck’s contemporaries from France, Spain, Italy and Germany, gathering together numerous examples of late medieval painting, miniature art, sculpture and drawings. The British Library has loaned to the exhibition two medieval manuscripts that particularly highlight the artistic environment in which Van Eyck was working. The first is a beautifully illuminated Book of Hours produced in Paris in around 1410 for a French aristocratic or possibly royal patron (Egerton MS 1070). Around 1440 it came into the possession of the bibliophile René of Anjou, King of Naples (b. 1409, d. 1480) and subsequently five full-page illustrations were added at key points in the manuscript, apparently at the request of the Neapolitan king who wanted to customize it for his own use. Most recent scholars have attributed these added illustrations to Barthélemy d'Eyck (b. c. 1420, d. after 1470), a Netherlandish artist known to have worked for René in the middle of the fifteenth century. He also seems to have been a member of Jan van Eyck’s family, though the exact nature of their relationship remains unclear.

The additions to the manuscript include a painting of René’s coat of arms, followed by a view of Jerusalem, showing two of the city’s most sacred sites, the Church of the Holy Sepulchre and the Dome of the Rock. 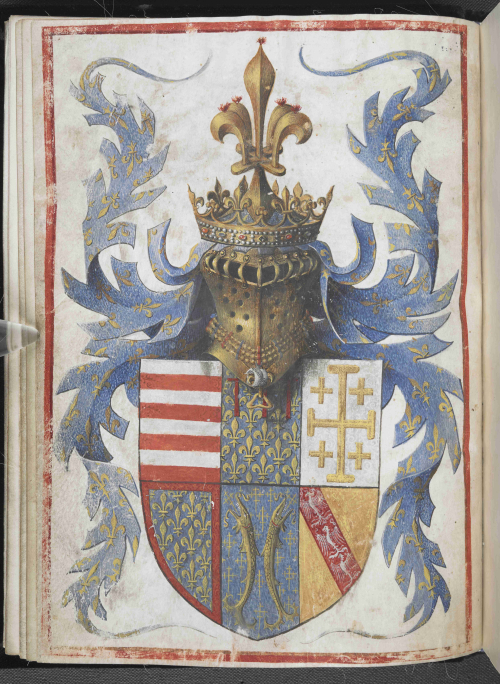 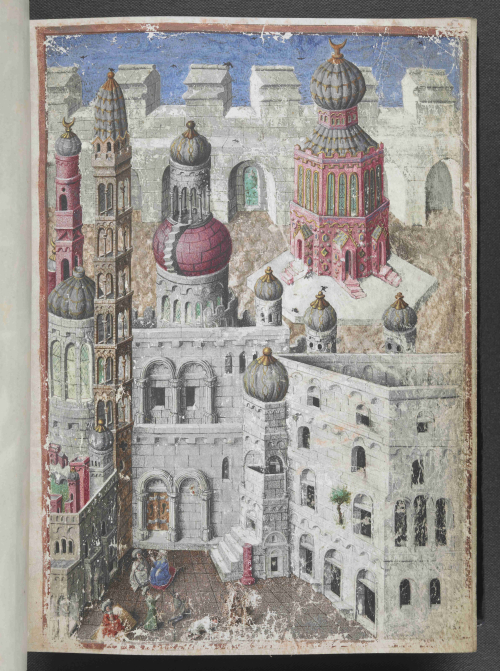 A view of the city of Jerusalem, showing the Church of the Holy Sepulchre and the Dome of the Rock, added to a French Book of Hours (Paris, France, c. 1410): Egerton MS 1070, f. 5r

Another addition is a macabre personification of Death wearing a golden crown, which was added directly before the Office of the Dead. It might be a portrait of the king himself, a reminder to René to live wisely. The worm-eaten corpse clasps a scroll inscribed ‘Memento homo quod sinis es et in sinere reverteris’ (Remember, man, that you are dust and to dust you will return), while in front of him a textile is displayed, bearing the king’s arms. 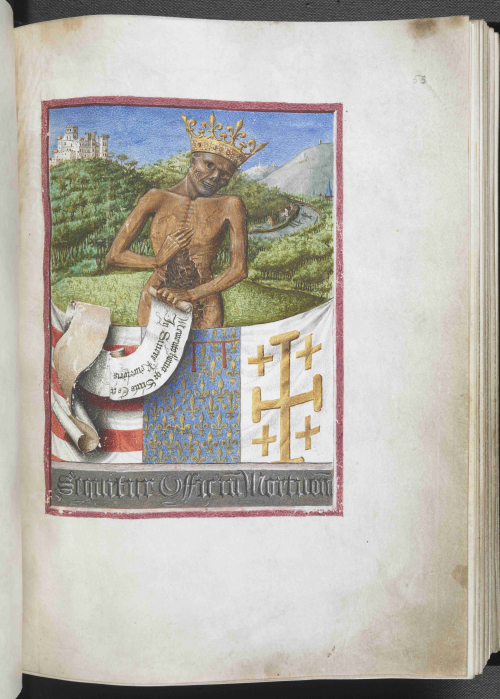 A personification of Death wearing a golden crown, added before the Office of the Dead in a French Book of Hours (Paris, c. 1410): Egerton MS 1070, f. 53r

The exhibition also features the first volume of a five-part Latin Vulgate bible, made in Liège in around 1430 and later housed at the Benedictine monastery of St Jacques in the city. This volume has been recently digitised and now can be viewed online (Add MS 15254). The first page of the Book of Genesis (f. 13r) opens with a decorated initial letter I(n Principio), containing illustrations of the days of Creation. At the side of the initial is a column of angels holding scrolls with quotations from the writings of St Augustine of Hippo (b. 354, d. 430). Beneath them is a kneeling cleric, who possibly represents the manuscript’s patron. 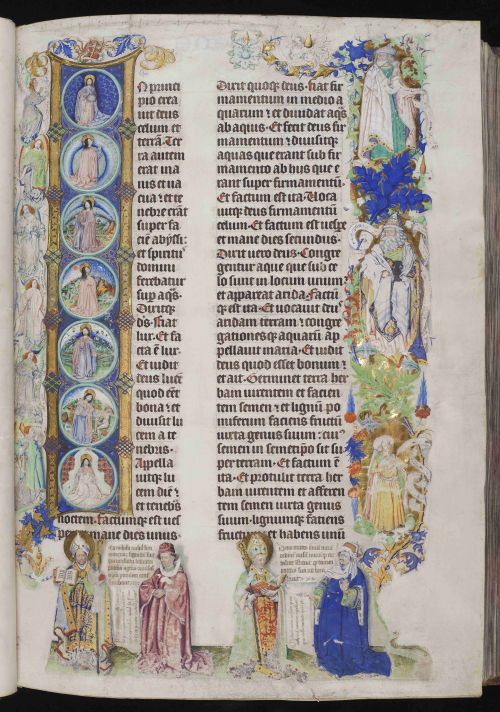 The opening of the Book of Genesis, with a decorated initial I including representations of the days of Creation, and marginal illustrations of angels, philosophers, and Old Testament prophets. (Southern Netherlands, c. 1430): Add MS 15254, f. 13r 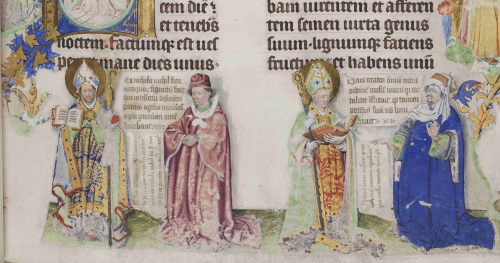 St Augustine and Aristotle, and Albertus Magnus and Averroes debate the creation of the world, in marginal illustrations at the beginning of the Book of Genesis (Southern Netherlands, c. 1430): Add MS 15254, f. 13r detail

Other illustrations were added to the page at a later date, and these display a close resemblance to a style typically used for panel painting during this period. In the lower margin, two pairs of Christian and pagan scholars are shown debating the creation of the world: St Augustine and the Greek philosopher Aristotle (b. 384 BC, d. 322 BC) on one side, and Albertus Magnus (d. 1280) and the Arabic philosopher Averroes (b. 1126, d. 1198) on the other. Meanwhile, in the right-hand margin appear representations of three Old Testament prophets. Though the identity of the manuscript’s illuminator remains unknown, the style of the added illustrations has been closely compared with that of Van Eyck and it is likely that the two artists were working in the same circle in the Meuse region (now covering parts of Belgium, Germany and the Netherlands).

We strongly recommend that you go to see both these manuscripts on display at Van Eyck: An Optical Revolution which runs at the Museum of Fine Arts (MSK), Ghent, from 1 February until 30 April 2020.